After taking a break from some late night CIC work, I've finally been able to really sit down and really play the game. Before even starting, some of the extras are rather nice. The game has an interesting screen for teaching you game controls and four independent characters can make a save game and play at their own pace. If I'm not mistaken, it forces capitalization in a certain way for your callsigns which is a bit odd, but very minor.

The engine rendered movie clips are well done and lead into walking around the Midway well. As I said in my E3 impressions, the atmosphere of the shipboard scenes is absolutely incredible. The Killboard has had minor characters removed while the tech database has been expanded. I think they might have switched which hotspot on the wall links to each.

The story is presented well through the talking heads style used in other GBA games such as Zone of the Enders: Fist of Mars. Having played the original Prophecy so much, I find myself moving through the text pretty quickly. I'd be interested in hearing story impressions from people who never played the PC version.

As soon as you pop into the cockpit, as other people have stated, I was startled by Comm Officer Anderson's speech clearing me for takeoff. This continues into battle where you're automatically more empathic with characters that scream "Aaghh.. goodbye friends.." (and multiple alternate lines) when they die. It's amazing how little touches like speech make you identify with them so much more quickly.

Of course control is slightly awkward because of the GBA interface. A joystick would be nice, and I will seriously be looking into the joystick clip on mods for the GBA soon. Overall the commands have been mapped to the buttons very well with much automation. About the only thing I miss is the option for full guns. Special weapons such as the stormfire and charging mass driver seem much more useful in this version of the game.

Because they've taken out component damage on capital ships, the Midway is a little more susceptible to damage from your medium and light fighters, though to counteract this it seems like your Red Manta and Skate-T threats have been diminished. I think all Mantas might be the red bomber variant (at least in coloring). Mission percentages, kills and so on are now accessible during the mission when the game is paused, and your overall mission scores seem a little more forgiving.

Although automating controls like Autopilot makes the game much more user friendly, it would be nice to be able to leisurely cruise around the Midway once in a while. It appears that the Wasp's boost function has been handled automatically as well. I'm looking forward to some more serious capship engagements in the future.

So I'm in G'Wriss trying to save the supply convoy now. No doubt I'll have more to say as I progress. I'm really anxious to see how the controls play using a GameCube Controller when the Cube-GBA Player comes out in a few weeks. It all takes some getting used to because some of the more complex features have been dropped or modified. However there are enough surprising handheld innovations to impress most people.

Prophecy Advance is in Control

A whole lot of people have wondered how the complicated Wing Commander control scheme would be mapped to the Game Boy Advance. To help the curious, we've added the game to our Game Control Section. You can find out exactly how they did it here. The game also has an extremely cool ICIS style control tutor built in. Pressing different button combinations illustrates different interface commands. It's a nice touch. 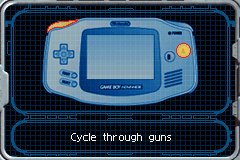 Quarto has discovered that local Australian Electronic Boutique stores are now listing Prophecy Advance. This is good news since we've received precious little information on launches outside of the United States and Europe. The ETA on this stands at about three weeks (same as Europe).

We're proud to announce that the world famous ace Hyphen One is officially celebrating the 7th annual ace's Happy Month. June 2003 marks the seventh year since ace's Happy Homepage was created. In addition to the vast array of entertaining things there at all times, ace has constructed a special AHM 2003 site to compile new and old special submissions. A lot of older stuff has seemingly been lost to time, but the powers that be are currently in the process of digging things back up. Stay tuned throughout the month for new AHM events and the discovery of long lost AHH artifacts. You still have time to contribute yourself as well. Although .wav audio is the traditional sound format of AHM, mp3s and other exotic media formats are welcome as well.

You're not a real character if there's no picture of you sitting in the briefing room with a name penciled in.