In what seems to be an ever increasing amount of pre-release publicity, Raylight has given N-Philes an interview all about Prophecy. Unfortunately there are no new screenshots, but there is a bit of new information. Here's a quick round-up of the new info:

You can read the full interview here. It's a very nice read into the overall background of the game.

The Color Balance Really is Awesome

Edison Trent, Freelancer from the future, sent out a cover letter to prospective players to let them know that his game will truly be out next week. Not only did the CIC get quoted, it got the best quote of the bunch. You can read it for yourself below. 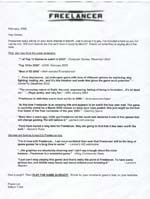 "...the graphics are stunning and I can't say enough about the color balance... Freelancer is a wonderful game." -Wing Commander News

Care for some context? You can read our Freelancer first impressions from December here. Our friends at Lancers Reactor and Lancers HQ were quoted as well.

Zero, Maestro and Hawk as the Angry Man.