It's our first anniversary... and here's what's new.

From Hades and Chris comes a comprehensive game based index of Wing Commander's fighting spaceships. From A-Arrow to W-Wasp, they're all here... check it out.

From Hadrian we have a video of 3D Wing Commander 2 ships put to music -- it showcases some excellent modelling and rendering skills.

From Byydo comes a massive undertaking properly entitled Byydo's Happy Secret Thingie. I won't reveal its terrible secret outright, but can safely say that Wing Commander has finally taken its place among one of the staples of the Internet.

And me? Well, I've decided to release the first part of the CIC's Wing Commander Timeline. This is the first of three segments, this one covering the pre-war era. I'm leaving to drive to UT tomorrow, and the second part (the war) will be posted when I return. 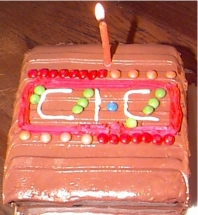 AND SPECIAL THANKS TO...

Kevin Kwast: For maintaining our server and for not killing us when we want to do silly things.

Delance & Vanhecke: For helping Chris & Hades with their ship database.

Phoenix: For the beautiful graphics, which we have since bastardized.

Boomer & David Swofford: For answering our questions, no matter how annoying they were.

Neil Young: For helping us get the thing started in the first place.

Beth & ATFW: For all the support over the last year.

The Visitors: For not downloading too much stuff at once and ruining our server. And for visiting.

Trelane & Byydo: For being staff members but not knowing it.

AGWC: For giving us a place to argue about whether or not the movie is canon.

The Volunteer Chat Zone Moderators: For helping us keep the Chat Zone up and running.

Peter Telep: For keeping the fans in mind when writing his novels and for almost coming to the chat tonight.

Chris McCubbin: For keeping everybody in-the-know about the Handbook.

Jumpstart: For letting us use the Killer Bee's server.

And to Lanced.net: For making us look good. (Just kidding, we love you guys).

And The Rest: Are all here on CIC Isle... and deserve a big round of applause.

(And from this staff member to the rest, for being the best friends a guy could have).

Hey, where'd LOAF go? He's been away for a while with some eye problems -- but he didn't have to have surgery, and he's back just in time for the anniversary.

There's a couple News Updates we're going to try to put up throughout the first half of the day to separate them from the slew of Birthday Updates we're planning later on. So.. basically keep checking back, and we've done it to death, but we can't help but plug the Party one more time. We really do want it to be a fun event for as many as possible. Check here or here for the details. Have a nice day.

Kilrathi Saga Classic May Be on the Horizon

Angel Little reported this at alt.games.wing-commander this morning.

Now all we need are the DVD versions. :)