It's Time For Five Questions...

Wing Commander author Andrew Keith was kind enough to answer a few quick questions for us... read on! (Thanks to Dundradal for setting this up).

1. What can you tell us about the upcoming Wing Commander: False Colors?

Understand that I don't know what changes may have been made in the novel's two-year odyssey since it left my word processor. However, it WAS the story of a band of humans whose breakaway frontier worlds are threatened by Kilrathi warlords, interstellar politics, and Terran apathy in the wake of the long war. To save themselves, they set out to recover a damaged Kilrathi carrier and put it back into service, meeting some surprising enemies -- and allies -- along the way.

2. Will you be involved with future chapters of the Wing Commander universe?

I certainly hope so, but I haven't been approached as yet.

As far as I know, I am NOT William H. Keith in False Colors. At least, they got my name right on the cover. (I suppose you've seen some promotional piece that messed this up). My brother, William H. Keith, has also been doing some work for Baen (very good work, I might add), writing books set in Keith Laumer's Bolo universe and a very funny sf comedy (with Peter Jurasik of Babylon Five) called Diplomatic Act. I suppose somebody in Baen's publicity department got confused.

4. What else have you been up to lately? Any non-WC books coming up?

I've got one book in the pipeline (under the name H. Jay Riker) in the ongoing SEALs --The Warrior Breed series about the early days of the war in Vietnam. "Riker" is also just starting a new series following modern submarine warfare, of which I'm writing (at least) the first book -- my brother or I will be doing others down the line. I'm also just beginning to plot out some notions for a book, not contracted anywhere yet, following a space-going carrier battle group, sort of like Wing Commander meets Tom Clancy but against a backdrop of my own devising.

5. I understand you've seen the cover art. What can you tell us about it?

The cover is a little odd, showing about half of a snarling Kilrathi face above a spacebattle (which thus appears to be flying out of the cat's mouth -- one ship appears in imminent danger of running into a fang). As covers go, it isn't horrible, although frankly I liked the HOTT cover better. 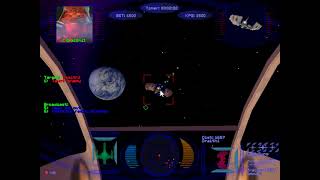