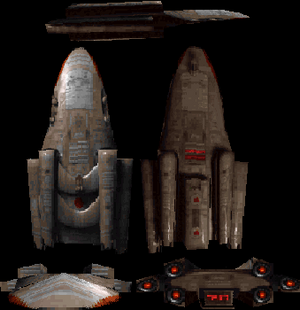 The Shiraak is a class of Kilrathi carriers.

Prince Thrakhath deployed the KIS Shiraak (23rd Vessel of the Imperial Fleet) as his "final messenger to the Terrans" in early 2669 following his aborted Earth campaign. The carrier was ordered to cross enemy lines and launch revenge raids on human military forces and planets. The Shiraak was expected to operate until its destruction, and no plans were made for retrieval.

Before crossing into human space, the Shiraak engaged the TCS Lexington. The two ships fought a series of running battles across the Jakal, Teragon and Evian Systems.