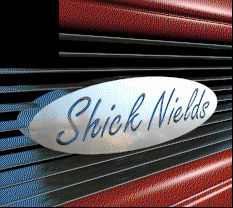 BACKGROUND:
A classic rags to riches story, Shick Nields built his empire of used ship trading up from humble beginnings as a simple wagon maker on Bex. He is unique in the history of auto trading, being the only known dealer to have unknowingly averted a major interplanetary war by selling a single ship. According to legend, an ancient and warlike race from beyond the Tri-system had designs on the peaceful planet Bex, but just before the planned invasion their Commander-in-Chief, Shaftus Destructivus made the fatal error of purchasing what he believed to be a nice little sporty number with only 2000 jumps on the clock from Shick Nields himself, in which he planned to lead the entire battle fleet, screaming down to Bex. What he didn't know was that the craft he had bought was in fact a Hades sewage system maintenance vehicle, with a new paint job and a few cosmetic adjustments. Whilst being perfectly air tight, the vehicle relied on traditional friction brakes to stop, which in space are useless (vacuum is an environment where friction does not apply). It would be an understatement to say that he was 'quite surprised' on over-shooting Bex by about 120 millennia, taking himself and the entire fleet out of the Tri-system and into the echo dimensions, from which no one has been known to return from. This event may provide a clue as to why the CIS have turned a blind eye for the last 30 years while Shick has continued as the system's leading purveyor of dubious space transport. His latest selection of quality used vehicles can be viewed on-line through the booth system.