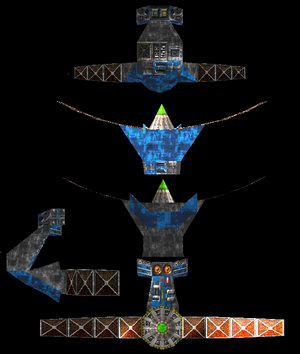 Lasertowers are deployed throughout the Tri-System on both a permanent and a temporary basis. They are adept at adding firepower to the defense of particular installations or points in space.

The Jincilla and Kiowan pirate clans both use lasertowers: the Jincilla Base at Nav 96 was defended by a dozen of the weapons, and the two clans erected eight each for protection during a recent prisoner exchange. The CIS uses lasertowers to defend their bases, too: four defend their munitions depot and ten defend the restructed space at Nav. 180. Military capital ships often deploy lasertowers while moored - the CIS Wilcox carries three of the satellites.

Civilians have access to lasertowers as well: the madman Scorpio attempted to trap Lev Arris with four of them near Athos.