As it is in Heaven 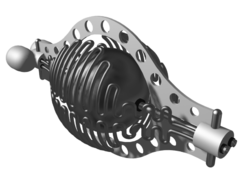 Coolant Unit MK II CUL2
For the pilot whose finger is permanently on that trigger, this improved system will increase your lasers' Cooling process by 50%. (51)

Increases your ship's base cooling speed by 50%.

Coolant Units increase the speed at which your guns cool down, making them less likely to overheat. This means you can fire longer, without having to break off and wait for your guns to cool down.

If you have anything more than a couple of stream lasers, you probably need a coolant. Getting a good Coolant Unit becomes particularly important as you begin to load multiple guns - the speed at which they heat up increases immensely. Also, if you like long-range combat, you should definitely look into getting a Coolant Unit. It's harder to be accurate at longer distances, and long-range gunners generally end up firing at their targets for more extended periods of time.