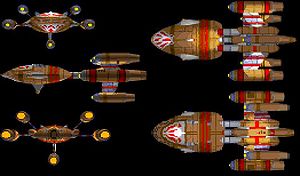 The Ralatha is a heavily-armed capital ship built to fill the role of a traditional destroyer, similar to its cousin, the Ralari. Its main purposes include the escort and defense of larger capital ships in the Kilrathi armada and assaults on on ships and stations operated by the Terran Confederation. It is well-defended and carries up to 23 fighters, making it a lethal foe.

The Ralatha took part in numerous campaigns during the Terran-Kilrathi War, and was very active in the Enigma Sector during the eleven-year campaign to conquer the sector. Ralathas took part in numerous offensives against Confederation bases and fleets, and were also heavily involved in quelling separatist movements on frontier planets like Ghorah Khar. However, the separatists themselves also managed to take possession of some of these warships, among the more famous examples being the KIS Shar N'Tanya.

Weapons of the Terran and Kilrathi Fleets