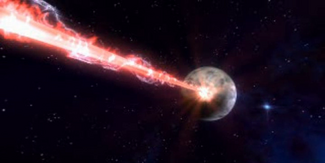 Loki VI is destroyed by the TCS Behemoth's superlaser in 2669.

Loki VI was the sixth planet of the Loki System. It was destroyed by the Terran Confederation in 2669 during the Terran-Kilrathi War. At that time, it was controlled by the Kilrathi Empire.

Loki VI was a small, barren world that was once a territory in the Union of Border Worlds. At some point during the Kilrathi War, the Kilrathi invaded the entire Loki System, and quickly established bases on its worlds. Loki VI hosted a small Kilrathi security facility since at least the 2660s.

An interesting fact about Loki VI was that it orbited a quasar, a galactic region which effectively blocked the communications of any ship or planet within its perimeter. Therefore, the Kilrathi facility suffered periodic communications blackouts whenever it passed through the quasar's radiation.

During 2669, the Terran Confederation commissioned the TCS Behemoth, a massive dreadnought designed for the sole purpose of destroying the Kilrathi homeworld of Kilrah in an effort to end the Kilrathi War. Admiral Geoffrey Tolwyn selected Loki VI as the planet on which to test the Behemoth, as the loss of communications in the quasar would render the Kilrathi unable to send a distress signal during the test. It was hoped that by the time the Kilrathi arrived, Loki VI would be destroyed and the Terrans would be on their way to Kilrah. The TCS Victory was assigned to escort the Behemoth on its test run.

The Behemoth arrived at Loki VI just as the planet entered the quasar's radiation. Although Kilrathi patrols attempted to drive off the vessel, they were overwhelmed and destroyed by pilots from the Victory, allowing the Behemoth to attack. The vessel fired its super-laser at the planet, completely destroying it and an estimated 1,500 Kilrathi who were present on the surface. The success of the test prompted the Confederation to order an immediate strike on Kilrah.

Unfortunately for the Terrans, the Kilrathi, with help from a traitor aboard the Victory, discovered the presence of the Behemoth and sent an overwhelming strike force to destroy the vessel. They quickly pinpointed the vessel's weak spots and destroyed it, forcing the Confederation to abandon the Loki System.