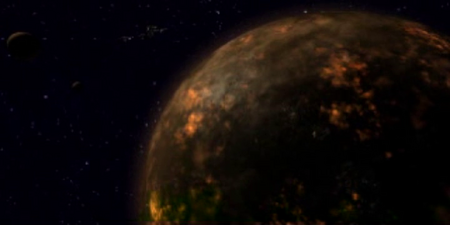 The Kilrathi homeworld of Kilrah in 2669.

Kilrah was described as a "dirty orange-brown sphere." It was also described as a blue-green planet by some sources. The planet was seismically unstable potentially due to strong tectonic forces, further exacerbated by a multi-layered surface riddled with active faultlines. The planet suffered from large scale volcanism and quakes. This instability was taken advantage of by the Confederation when Colonel Christopher Blair dropped the Temblor Bomb on Kilrah on 2669.267, destroying the planet. The planet was covered with deserts and savannahs prior to its destruction.

The tectonic destruction wrought by the Temblor Bomb was complete. A large section of the planet was literally ejected into space as a result of the Temblor Bomb. The majority of Kilrathi warships within its immediate vicinity were annihilated in the resulting blast, as were both of its moons.