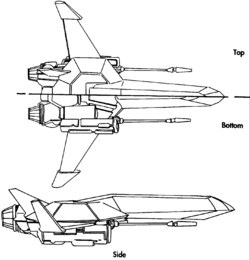 Gratha from the Joan's Fighting Spacecraft supplement in the Vol. 1 No. 4 issue of Claw Marks

The Gratha was a Kilrathi heavy fighter. It was included in Joan's Fighting Spacecraft Vega Sector Supplement for 2654.092.

The first in what would be an extended line of elite heavy fighters, the Gratha's design was patterned after the more complex human fighters which had achieved great success against the Kilrathi tactic of numerical superiority. Grathas drew first blood during a 2654 offensive in the Gateway System. Unfortunately, the Kilrathi fighter doctrine of the fifties did not yet allow for small groups of more sophisticated ships. Rather than assign the precious few Gratha coming online to experienced veterans, sector command formed units made up entirely of newly commissioned Fourth Fangs. As a result, Gratha squadrons suffered heavy losses against experienced Confederation fighters during the final months of the Vega campaign.

Though their rocky deployment meant they would never come to receive the respect associated with later fighters like the Hhriss or the Bloodfang, the Gratha nonetheless went on to enjoy a long and successful career. When Kilrah comissioned its first light carriers, Gratha squadrons were the first choice for space superiority duty. Gratha would continue to find a home on fleet carriers for more than fourteen years, capping off their service with an appearance at the 2668 Battle of Terra. It was thereafter replaced by the Hhriss and other new heavy fighter variants.

The Kilrathi also refer to the command and control variant of their Naktarg-Class Shuttle as Gratha. The two ships are not related.