Bradshaw: She's the same old Sparrow. She really is. The one I missed so much. So what else could possibly go wrong? I was hoping she was still the same. And, I was hoping she'd changed. I don't even know...one thing's for sure - even when I covered for her, I still never expected things to wind up like this. Dammit, I just can't stop thinking about her, and at a time like this! Half the crew is convinced they're gonna die. The other half is openly suicidal! And me? Cougar's right, I have to talk to her.

Reismann: Captain, we're entering the final stages of this battle - and we're still losing. The enemy still has four of those supercarriers, and god knows how many standard carriers. I don't even know what's left on our side - even the Concordia has taken a beating. We must start knocking those carriers out of action, and the whole fleet's running out of torpedo bombers. And that's where that insane plan of theirs comes in. Captain, on this mission, you'll escort a wing of Concordia's Broadswords against an enemy Snakeir. Just one wing - three Broadswords.
Bradshaw: Three? With the cats throwing everything they've got? Might as well not bother, sir.
Reismann: You'll have the support of about two dozen other ships.
Bradshaw: Two dozen? Where d'you?
Reismann: Civilian ships. I told you, this is madness. But it's madness that has got to work. Those civilian ships, they're cannon fodder. If we're lucky, the cats will concentrate on those civlians, which will give the Broadswords a shot at the Snakeir. And just one other thing I want you to know. Even these Broadswords, as much as we hope they succeed, are just a diversion. You'll find out soon enough. Now get that carrier! 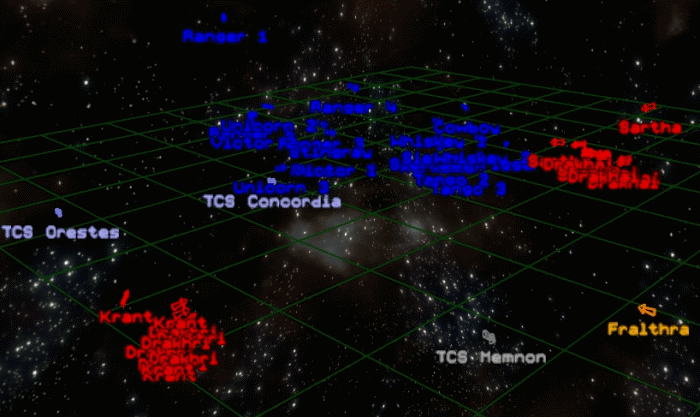 This mission is fast-paced but not particularly tactical. At the Snakeir nav, the Kilrathi will largely concentrate on the civilian ships, meaning that you have to kill as many cat fighters as you can before enough of the civilians die that the Broadswords become the primary target. It's worth remembering that FF missiles can only kill Sartha in one hit, while HS missiles can take out Drakhri as well. Save your dumbfires for the Hhriss.

The map shows that the corvettes start off uncovered - the enemy fighters are racing to intercept you so they won't stay that way for long, but it's worth taking out one of the three with focused fire from you and your wingmen at the start - that'll decrease the volume of firepower in that region enough to give the civvies and the Epees a fighting chance. Then go after the Sartha and the Hhriss, the most dangerous enemy fighters, leaving the mediums to your wingmen. Fly aggressively to get kills as quickly as possible, and as Kilrathi fighter numbers drop the Broadswords will begin to score torpedo hits on the carrier. The other capships can be ignored. When you return from the carrier strike you'll be sent off to help the TCS Concordia, which is suffering from its usual case of damaged flight deck-itis. As is common when this occurs, though, none of the Kilrathi fighters present can carry torpedoes, so the only actual threat to 3rd fleet's flagship is the Fralthra, and Concordia will take care of that herself. So since the only way to fail the mission is to die, you should fly defensively, targeting enemies who are targeting you, especially the Sartha who are both the most vulnerable and the most dangerous (due to their dumb-fire missiles).