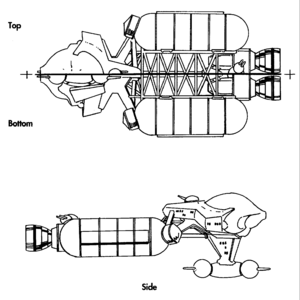 The Dorkir was a Kilrathi transport. It was included in Joan's Fighting Spacecraft Vega Sector Supplement for 2654.092.

Like its Terran counterpart, the Drayman-class, the Dorkir is a jack-of-all-trades which uses multiple configurations. Among those encountered to date:

Though a vital part of any war effort, tactical treatment of the Dorkir is evidence their cultural disdain for support staff. Two examples: In an attempt to relieve the garrison at the Brimstone System during a Confederation blockade, the Empire deployed dozens of lightly escorted Dorkir at once - hoping that a few might make it through to the planet. During anti-piracy efforts in the M421A System, Thrakhath's forces sacrificed an entire Dorkir as bait to lure out the enemy.

The Terran Confederation Space Forces Academy maintains a captured Dorkir on which students train for ship to ship boarding scenarios.