The Caernaven-class frigate is a class of capital ship in the service of the Terran Confederation. However, it has also seen extensive usage among numerous other Terran factions. 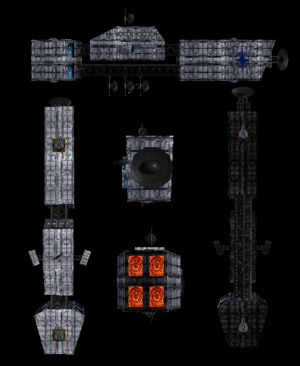 The Caernaven is an older Terran design that has served numerous roles on the frontlines. They have served as fleet escorts, system patrol craft, and evacuation vessels. They act as very large gunships and normally are equipped with several laser turrets and missile launchers.

The Caernaven has proven itself to be a reasonably popular capital ship, and has served extensively with the navies of both Confed and the Union of Border Worlds. It has also found itself in the hands of Terran pirate forces.

Caernavens have served for much of the duration of the Terran-Kilrathi War.

In 2673, the Border Worlds Conflict took place between the Union of Border Worlds and the Terran Confederation. Both sides employed Caernavens in their skirmishes against each other. They were also used by the Black Lance in their efforts to instigate war between the two factions.

During the Circean Civil War, several Border Worlds Caernavens participated in the evacuation of Circe VII, where they collected refugees from an island continent that had been victimized by a Black Lance chemical strike.

Caernavens became less common by 2681, during which the Confederation introduced a much more modern postwar fleet.