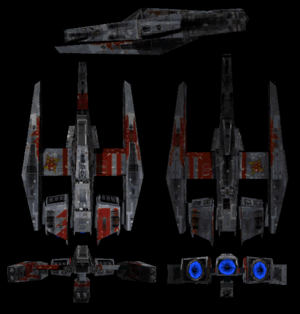 The Banshee is a light fighter primarily used by the Union of Border Worlds.

The Banshee is everything that characterizes a light fighter: fast, maneuverable, armed with a standard loadout, and bred for dogfighting. The Banshee is a space superiority fighter best suited for patrol, escort, and raiding missions, only occasionally carrying out offensive missions against enemy starships or convoys. The Banshee is not the best-armored fighter in combat, but it makes up for this with its speed, allowing it to dodge enemy fire for prolonged periods of time.

The Banshee is primarily fielded by the Union of Border Worlds, serving as its mainstay light fighter. It should not be confused with the A-20 Banshee, a Kilrathi War-era Confederation fighter of the same name.

The Banshee served in many actions during the Border Worlds Conflict of 2673. Banshees served on several Border Worlds carriers and were commonly seen on patrols throughout Union space, and were fielded in great numbers by the Border Worlds Militia. The Banshee served with distinction on the BWS Intrepid, and undertook numerous actions against the Black Lance while the vessel was commanded by Colonel Christopher Blair. However, they were also acquired by the Black Lance who used them to harass vessels from the Terran Confederation to incite open warfare between the Confederation and the Union. Many Banshees were destroyed during the course of the conflict.