Inspired by Nightball's Hellcat model, L.I.F. is back with a neat plan to upgrade his Freelancer/Wing Commander conversion mod. His original program allows you to play through the regular Freelancer campaign, but with familiar WC ships! Now he's looking at addressing the open ended portion of the game. Some of the new features are described below.

I've gone back to the mod and am adding some further features. The release being targeted is an open-ended sandbox, so without the original game's campaign. I've added a small chance for military-grade equipment to drop from destroyed military fighters, with the understanding that the player will not be allowed to buy them in any circumstance whatsoever, thus providing a long-term end-game goal rather than quickly becoming utterly overpowered.

The other thing I am working on right now is capital ship patrols: destroyers and corvettes that will patrol core sectors for each faction and protect major jump points. These will be dangerous, attacking a Confed DD up front being suicidal without torpedoes and a very good fighter. Game design-wise, the intent is to make piracy in core sectors a stressful activity as well as give a raison d'être to the hidden jump points around the sectors. 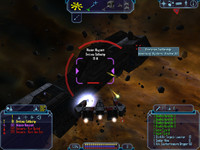 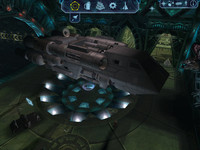 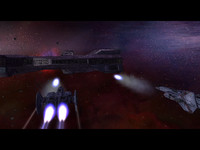 For reference, the anti-matter bolts will one-shoot most fighters on impact, like in the original games, and each laser projectile is more powerful than the military-grade equivalents mounted on military fighters.

Right now, the capital ships are finished and can be spawned in squadrons in the desired areas. I've established simple protective forces around major planets, border gates and at the entry of each capital sector.

Playtesting the thing using my weapon/equipment reconfiguration reminded me of the difficulties. TLDR, the gameplay kinda sucks and I'll probably have to rethink the entire balance and design before even considering doing beta releases for testing.