It's part of a mid-90s cross-promotion between Origin and Intel. Most of the print media focused on Origin’s air combat games, Pacific Strike and Wings of Glory. But WC did show up in a commercial narrated by Levar Burton! The shot in the magazine ad above uses one of the first published pre-release screenshots from Wing Commander III which features an Arrow and a triangular Kilrathi transport. 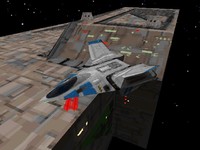 The triangle transport didn’t make it to the finished game! PC (and Mac and PlayStation) pilots know the Kilrathi transport as a sort of long latticework ship.

The design shows up in Wing Commander IV... but again only in a cutscene, you only see Kilrathi shuttles in-engine. 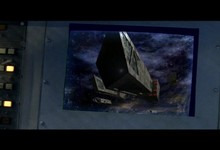 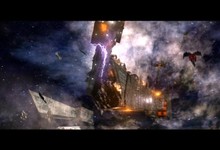 It even shows up as the Kilrathi transport in the Wing Commander TCG!

What’s happening here? Turns out it was cut late because of a clipping issue and replaced with the model for the Kilrathi tanker, which was the intended role of the latticework ship. But the mesh is still stored in the games files and it was restored for the 3DO released! 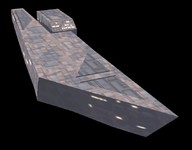 The Arrow model in the screenshot is also very early! It’s much closer to the version used in Wing Commander Armada than the final one in WC3. Armada was forked from WC3 early in development including the in-progress models for the Arrow and Dralthi. 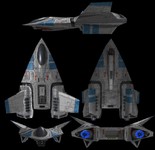 Some years later I got to name some of the unnamed ships from Armada, WC3 and WC4 in the manual for Wing Commander Arena. I remembered both transports!