The crew of Spoiler Filled have done a conversational podcast review of the Wing Commander feature film. Being unfamiliar with the Wing Commander franchise beyond the film's reputation, the podcast covers their expectations and then contrasts them with their impressions after watching the film. Their overall impression is not necessarily positive, but they do say the reputation is undeserved and give props to the movie's special effects scenes as being quite good for 1999. 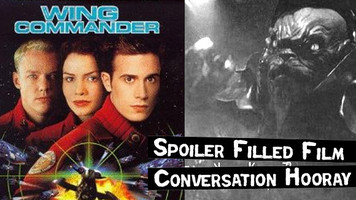 Yes, it’s time for Rich, Abi and Ant to have a not too hate-filled chat about the movie, for Rich to try and talk about ‘Star Trek’ similarities despite not knowing anything about the show, for everyone to speculate about the games without having played them, and for some discussion on why the story really doesn’t make much sense at all. Overall, it’s not quite as bad a movie as its reputation, but the word ‘generic’ does pop up frequently and the Crew do seem to want to execute the Lillard character ruthlessly.