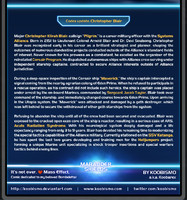 Klavs spotted a Wing Commander reference in a bit of an unusual place. The Mass Effect-based web comic Marauder Shields is a fan made alternate ending to Mass Effect 3. The authors are apparently Wing Commander fans, and they've created a Christopher Blair character to fit into their story. It may be a little difficult for the uninitiated to figure out what's what, but there's actually some deep WC lore baked into Pilgrim's bio! Check out our WCPedia page to distinguished the "fact" from "fiction." You can also find a video intro to Marauder Shields here.

This issue is absolutely packed with Wing Commander references (read the codex below).

And you know what? If you've played Mass Effect 3 and were dissapointed with the ending, this actually... kind of helps. The audio episodes are pretty decent, as well.