lew82 has quickly bounced back from the release of Frontier - Prelude to Darkness part 8 and is hard at work on chapter 9. Numerous ships and characters have been profiled at Ardament, and dialogue recording is under way. The tentative release is planned for later next month, which gives viewers plenty of time to catch up on previous episodes. 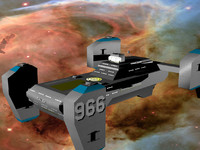 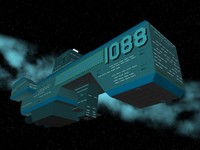 Part 9 will show the regrouping of Devers‘ unit from their crash landing and it will show just exactly what the U.S.S. Hammer finds out there by the wormhole and the results of bringing it onboard…

Prolific Wingnut artist NinjaLA has released his second game for the XBox 360. World War Toon is available now in the XBox Live Marketplace for 240 Microsoft points, or about $3. Ninja did the artwork, and his partner Brian S. was responsible for the coding and construction of the game. Development was made possible by the XNA 'indie platform'. On a tangential note, one of the Microsoft leaders responsible for XNA is Origin vet Frank Savage. Check out the WWT demo or grab the full game (sent to your 360 via the web interface) here. Ninja's first game was No Frills Sudoku.

World War Toon is a quick-paced turn-based strategy game. Much like Risk, it has territories that the player fights for control of. However, instead of the flat board that Risk is played on, World War Toon spans a globe with randomly generated territories. This makes for a nearly infinite number of unique games, no two are ever the same.

Where Risk had a basic concept of units, with the only difference between them cosmetic, World War Toon has three distinct unit types: Infantry, Tank & Rocket Launcher. Each type has an advantage against one other type when in battle. This makes for a new level of strategy as players try to maneuver their units to allow for the greatest advantage in future battles.

Also separating World War Toon apart is the concept of Reinforcement Dice. Where Risk rewarded you by allowing you to place more units into your territories, World War Toon allows you to add more dice to any battle. Rather than stacking huge numbers of units onto a territory, you can call up your reserves whenever you need them, even on your opponent's turn!

To quicken the pace of the game further still, the player can choose from traditional setup or quick play. In traditional setup, each territory is picked by the players before the game begins, much like in Risk. Quick play allows the player to skip that setup phase and gets straight to the action of battle.