An initial test release is now available for WC Invasion, a mod for Star Wars Empire at War. Both capital ships and fighters are ready to play for both Confed and Kilrathi sides. The game requires an up-to-date copy of the Forces of Corruption expansion. Lots of work is still yet to be done, but this will give eager Wingnuts a taste of what the game is like so far in skirmish modes. Grab the mod here and visit Crius.net for any questions, comments or issues. Here's Major Payne with more information.

Since this project's inception all those months ago, I've spent many hours getting these ships in game and whilst they do lack the certain bleeps and whistles of the stock game, I'm hoping that this will all be worth it.

Firstly, all the planned models are in game and whilst the Kilrathi don't have the same quantity of ships as the Confederation, the side still has a diverse selection. Both sides generally have access to at least 3 classes of fighters and a minimum of 6 capital ship classes. Also each side has access to its own starbase. However, unlike the stock starbases the mods versions do not have the capability to increase in size/mass with each tech level upgrade. They also retain the same weapon count that they do for ALL tech upgrades (this means that the only reason for upgrading your starbase is to construct heavier capital ships and fighter classes). Secondly the following is completed and ready:

- Squadrons have been changed so that while you can purchase and construct each squadron as in the stock game (each squadron has between 2 and 5 fighters depending on fighter class), the squadrons actually act as individual fighters instead of a group or pair. There is of course, good and bad points to this: The good points are that this allows single fighters to be controlled instead of a group (good for scouting missions so you don't end up losing a whole group of fighters). The dogfight effect is better in this fashion as fighters will tend to attack which ever target they decide instead of having whole groups going after a single target. Unfortunately, the down side to this is the increased amount of icons when fighters are constructed or launched.

- Kilrathi Heroes. This seemed more of an afterthought than anything, and it's quite difficult to find portraits of well known Kilrathi royalty and other characters. As it is, I've got just three coloured portraits and as such these are the primary heroes. They are assigned the following: Hobbes, The Emperor and another member of royalty (Kilrathi Prince). Two of the capital ships assigned to these are versions of the buildable capitals. The third hero is a single unique unit which will be revealed when the mod is played. 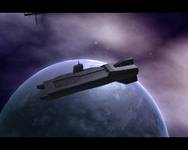 - Merchant Spacedock. This structure has been changed to a much smaller structure. Its still capturable and gives access (currently) to only a handfull of ships for each side. In a later version of the mod this will be changed for advanced ships for both sides and there will be quite a selection available.

- Planet changes. Currently there is one additional planet. As the WC universe does feature a terran side it's only logical to include Earth. Thanks to Alberto Ghezzi for publically releasing a slightly altered future earth style texture. It shows the effects of several hundred years of global warming and is of high quality. This is seen in the currently build during the cinematic "gameplay" video during the main menu.

Let's face it, console development seems like magic. We all imagine special Xboxes and Playstations that grow games instead of just playing them. That isn't how it really works, as this long list of PSX development tools reminds us. Check out all the Playstation development software available to the team -- much of it written by notable Wing Commander veterans.