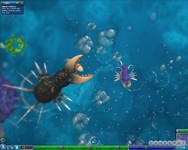 Mission G3 is the third in the G'mar series, the attack on the first Kraken ship-killer. You'll notice there are all sorts of references to this being the 'first half' of the mission -- and we'll find out what that means... tomorrow.