Here are some more awesome pictures of the current shuttle mission. The progress on the International Space Station recently has been very impressive. At first I thought the latest ISS shots were some kind of artist's renderings or concept images, but they're real live photographs. Super cool. STS-119 has been in space since March 15 and returns to Earth tomorrow afternoon. 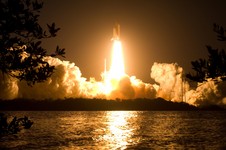 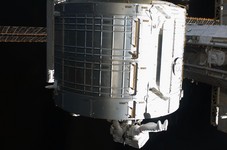 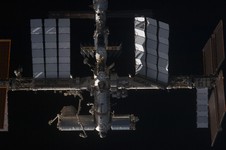 Billows of smoke and the water near Launch Pad 39A at NASA's Kennedy Space Center in Florida capture the brilliant light of space shuttle Discovery's lift-off on the STS-119 mission.

STS-119 Mission Specialist Steve Swanson participates in the mission's second scheduled EVA. During the six-hour, 30-minute spacewalk Swanson and Mission Specialist Joseph Acaba (out of frame) prepared a work site so the STS-127 spacewalkers can more easily change out the Port 6 truss batteries later this year. On the Japanese Kibo laboratory they installed a second Global Positioning Satellite antenna that will be used for the planned rendezvous of the Japanese HTV cargo ship in September. Also they photographed areas of radiator panels extended from the Port 1 and Starboard 1 trusses and reconfigured connectors at a patch panel on the Zenith 1 truss that power Control Moment Gyroscopes.

The International Space Station is featured in this image photographed by a STS-119 crewmember as Space Shuttle Discovery and the station approach each other during rendezvous and docking activities on flight day three. Docking occurred at 5:20 p.m. EDT on March 17, 2009, as the two spacecraft flew over Western Australia.

Mission F5 is the Marine LC landing on the Kilrathi space station. One of the mission notes is interesting to me - I don't remember anything this specific making it into the finished game: "6. There is a small band (2-3) of medium or heavy alien fighters waiting between the alien-held Kilrathi starbase and the Midway to ambush the Marine LC shuttle (they know the prisoner is on board). This will be considerably difficult to complete. The player will hopefully be able to maneuver between the attackers and the shuttle, blowing one or two away with missiles immediately."