I'll keep this short: Jeremy Miller has made an awesome mousepad! He says: "To compliment yesterday's old school WC wallpaper I thought that I'd share the design I made for my WC mouse pad. It's a 300 dpi jpeg (7 megs) that I put together and had printed at Kinkos. Thanks for all you guys do to help keep the Wing Commander community alive." No, thank you - you're doing the real work! You can download the full image here. 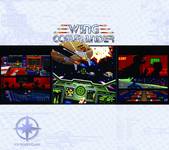 User friendly features include the option of saving your game at any given point, emulation which is quite accurate and speedy load times. Collection includes certain popular game classics. There are a total of fourteen games from the 16-bit library in the EA Replay PSP game. Synthesis is one of the games in which you control a group of thugs wearing trench coats. This futuristic gang war game is as exciting on the PSP as it was in its original PC version.

Other games of this interesting pack include Wing Commander, Ultima: The Black Gate, Wing Commander: Secret Missions, etc. Other games which play as good on the PSP as with their original consoles include the Mutant League Football, Desert Strike, Jungle Strike, Road Rash games, Violent twist on the Madden series, etc.

... I think they mean Syndicate. Still, this is a good reminder: EA Replay still exists! Wing Commander Arena isn't the only current generation Wing Commander game... and EA Replay is both as affordable and easier to put under a tree.