Prepare To Cloak Your Desktop

Kilrah Moreira has modeled a new wallpaper in 3DS Max. What do you know? It features Kilrathi ships! A trio of Strakha dodge some rocks in a volatile region of space. You can find some of his other creations here. 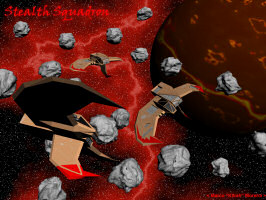 Warren Spector, the friendly former Origin producer who's a popular grab for interviews, has just talked with Escapist Magazine. With declining theatrical revenues this year, Spector says Hollywood executives are calling him left and right for potential new ventures. There have been a fair number of mediocre video game recreations of popular movies, but Spector's forte lies in conveying the emotion and experience that most movie-to-game conversions lack.

"I hold up my own career as an example of the ability to do original work in someone else's sandbox." He observed that, apart from System Shock and Deus Ex, "every computer/videogame I've worked on has been a sequel or derivative. On every one of them, I had to negotiate to find my own creative space and on every one of them, I feel I succeeded."

Spector said, "I firmly believe that, if developer and licensor (and publisher) get on the same page about what people expect - a dialogue that clearly has to be driven primarily by the licensor, I admit - you can still do creative work in someone else's universe."

It's a pretty lengthy interview and a good read about the evolving state of the games industry. You can find where it begins here.