There was quite a bit of discussion the last time we posted a sibling pair of Wing Commander Movie reviews, so we'll try it again. These are two articles that both take a similar tone. Both reviewers went in after having read other negative articles but were pleasantly surprised. The DVD Corner writer first saw the movie once it was released for home viewing and acknowledges his low expectations made the film surprisingly good. He credited the special effects, sound and picture quality with providing an entertaining ride but faulted Lillard and Prinze's performances.

Fans of the Wing Commander video game series will find a great deal to enjoy here. I was pleased with the technical merits of the film, but the plot is thin, and the acting started to wear on me. Freddie Prinze Jr. and Mathew Lillard give stiff and ridiculous performances respectively. After seeing them in Wing Commander, I am surprised their teen-slasher careers are still going. Overall, I would say this is an average movie that has been transferred nicely to DVD.

Mutant Reviews From Hell wrote today's second review. They pointed out one of the major mistakes that the film's distributor made. With uncertainly looming in regards to Star Wars Episode I, a release date was never planned much in advance. So the film's marketing was entirely crammed into a week or two prior to the release. The US launch didn't get regular theatrical previews and other support that would be expected. This review also quite liked the special effects and was disappointed we might not see a sequel.

Don't get me wrong, I doubt it'll ever take home any awards, but Wing Commander is a very enjoyable film. It brought feelings of WWII movies to mind, and I really enjoy that. Particularly the fighters; they look like snub-winged war planes, and even fire guns that sound a lot like machine guns, not your typical sci-fi zaps and squawks. What's great is that it doesn't seem out of place. The characters rarely seem to like each other, but are brought together by the common knowledge that there is no place to fall back to if Earth falls. The multi-accented crews of the various ships suggest a real melting pot of cultures, not unlike the Allied Forces of earlier this century. Very cool.

There are actually three primarily contributors in the second article. Two agree with the summary above and a third ended up not liking the film overall.

Sword of the Stars is an upcoming 4X strategy game. While strategy games have declined in popularity along with space sims, the 4X category has fallen on particularly rough times. The space combat in Sword of the Stars unfolds in real time between four races with unique traits. There is a full technology tree that contributes to full customization of ships. The game will support up to eight players online with options for cooperative and competitive scenarios. 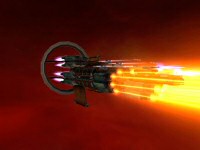 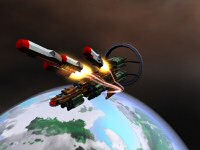 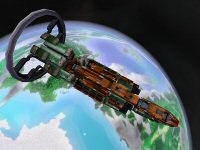 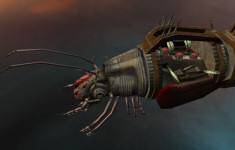 Sword of the Stars is a breakthrough Space Strategy game that seeks to reinvigorate the sub-genre. Players will explore planets, manage their empire and research new technology. Sword of the Stars provides quick, intuitive play, state-of-the-art graphics and tactical combat that make the game instantly involving and rewardingly fun.

There are game trailers and additional information at their website. I first saw this one over at ATFW.