In his continuing research into the video editing aspects of Wing Commander, AD reminded us about BlueScreen LLC. These guys have come up in passing once or twice, but I don't think we've ever shared them with the full audience here. Bluescreen provided the Ultimatte® facilities for Wing Commander 3, 4 and Prophecy. The same company helped with the video sequences for Command & Conquer: Red Alert 2. I always really wanted to peek further into the Midway's giant cavernous bay. Unfortunately, it doesn't seem much more exists than what's pictured below. The third shot is a neat composite image I made as Maestro and Casey bend over (deinterlaced over the originals). 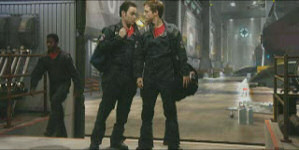 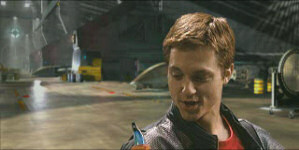 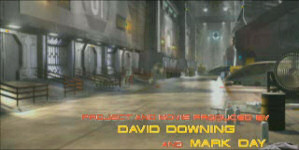 Using a specially modified Ultimatte® 6 and a DPS Hollywood D1 Disk Recorder, Bob Kertesz was able to give director Adam Foshko a full composite image to work with, recording that image as well as a processed foreground and an alpha (hi-con) channel for additional post work.

I'll always dream about those sets being real with pilots scrambling out the doors to mock Vampires on the deck. You can find some of the other projects Bluescreen has worked on at their primary website.

Now that the dust has settled, it looks like NASA's attempt to study the inside of a comet has been successful. Deep Impact smashed a probe into comet Tempel 1 as its mothership observed with a variety of sensory tools. 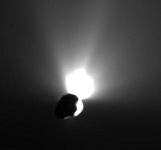 The Deep Impact mission was implemented to provide a glimpse beneath the surface of a comet, where material from the solar system's formation remains relatively unchanged. Mission scientists hoped the project would answer basic questions about how the solar system formed, by providing an in-depth picture of the nature and composition of the frozen celestial travelers known as comets.