Wing Commander Had Quite A Run

Today we have a couple more scans from Jonathan Stone that illustrate just how long the original Wing Commander enjoyed retail success. GamePro reviewed the Sega CD WC1 almost four years after the original PC version was released. Super Wing Commander and Armada had just been completed and Wing Commander 3 was only months away. Sega CD was far from the only special edition of WC1 that made it out however (though one of the very few with full speech!). From Amiga early on to Kilrathi Saga several years later, the original Wing Commander 1 was a hot seller for most of the 1990s. We also have a nifty advertisement from GamePro's February 1993 issue that promotes the Super Nintendo edition. 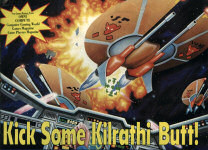 Wing Commander is the most extremely cool, 3-D Space Combat Simulator with more than 40 separate deep space missions that progress to near suicide dogfighting with the tiger-like Kilrathi. It's like an action-adventure movie - and you're the star!

Are you up for the challenge? This award-winning megahit is now available for the Super NES. Kick some Kilrathi butt with Wing Commander.

Electronic Arts has concluded their announcements for the E3 Expo a week ago. They have a wrap-up page with show floor impressions of each new game. The EA Games site is also running a poll that asks which of the new systems you're most anticipating. Since it's a nonscientific web poll, the results have been skewed quite a bit. Yesterday the Nintendo Revolution had about 10%, the Playstation 3 nearly 60% and XBox 360 just over 30%. The current results look like this:

The earlier results before various fan sites and forums got wind of the poll are probably a lot more accurate.