Continuing his design for his model of the Tarawa, Marc has been making plenty of fun additions to the flight deck, including an Eel flag and a control room. The eel flag is now famous as LOAF's forums avatar. Also there are now ships, which are always useful on a flight deck. 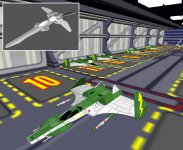 A recent IMDB Poll picked Privateer 2 star Clive Owen as the fan favorite for the next James Bond film. Taking in almost a third of the vote, he even beat out the current Pierce Brosnan by almost ten percent. Although some of the poll choices listed are more silly than serious, Lev is clearly becoming a bigger star. As it currently stands, he apparently hasn't actually been contacted about the role.

Oscar-nominee Clive Owen has shot down recent reports that he's a finalist for the role of James Bond in the upcoming Casino Royale. "They have never approached me," Owen reportedly advised tonight's episode of Access Hollywood. "It's nothing but a rumor."

Everyone should wish Chris "ChrisReid" Reid a happy birthday. Because it's his birthday today! As it's customary to celebrate by posting a picture, here's one from Dragon*Con. 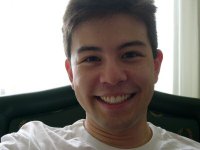