Long time Origin composer George Oldziey has released a number of new tracks from his upcoming game, Shaiya. They're not just selections from a new game though. There are very distinct Wing Commander influences throughout these samples. It's quite interesting to hear the variations and evolutions of the songs today.

A lot of it is influenced by the Wing Commander music I've previously composed. Actually, I thought it might be fun for you all to try to guess which Wing Commander pieces influenced which Shaiya pieces. Check it out! BTW, the coolest thing is that it's all LIVE ORCHESTRA and CHOIR!!! Something I tried for years to get Origin to support. It was recorded at the Clint Eastwood Scoring Stage at Warner Bros. just a few week ago. Enjoy!

It's great to hear that Mr. Oldziey is getting to do some cool things these days, and his suggestion for matching up Shaiya to Wing Commander tracks sounds like fun. To take a little load off some of his bandwidth, we've mirrored Battle Full Mix. This one should be quite easy to match up in Wing Commander. Hit the "Discuss" button below if you think you know where other tracks were inspired from. You can find his other samples here.

Tim Peel Heads Towards The Sunset

Tim Peel was playing around with the Hornet model created by Howard Day and created this scene showing a pair of Hornets flying towards the sunset. It was created as just a piece of art, but I think it would fit well as a wallpaper.

Put whatever story line to the image you’d like…It’s kinda ambiguous…I figure that the Hornets are out on a Search & Rescue mission but they could be on their way to a ski resort too…Who knows? J 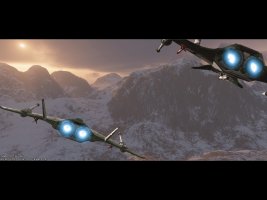 I think there's a pretty good amount of fan art around actually, but more is always welcome. You can see more of Tim's art at his site.