When TC gets bored, he goes hunting for Wing Commander items and usually brings back something completely terrifying. This time is no exception. He has come across some art which challenges HoTT's position as king of strange WC crossover art. Found on this Cats Don't Dance unofficial fan site is this piece of art by Dennis Hu, which is a crossover of Cats Don't Dance and the WC movie. 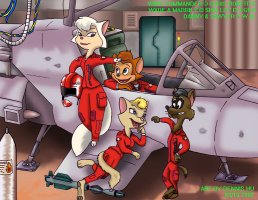 Although many Wing Commander fans were saddened this year with the apparent closure of Origin, there have been hints that Electronic Arts is keeping the brand alive to some extent. Their historic Austin campus is still being vacated, but as we mentioned previously, some of their staff is being moved to Los Angeles. The remaining staff's belief was that some titles may yet be published with the Origin logo even. A tentative Ultima X Odyssey box art has been circulated, and it lacks the logo, but a new box has appear that includes it. This box is for the recently announced Ultima Online 7th Anniversary Edition.

The new UO package is actually quite impressive. For $19.99 it includes all the previous UO expansions and a free copy of Ultima IX: Ascension with some minor improvements. There are various free gifts included for players of UO, and the box will come with seven friend-codes that you can give out to other people. Each code allows someone to play UO for a free month. Sounds like a really great deal to me. More information on the features of this set can be found here. And if you missed it earlier, Origin has announced that a sixth UO expansion should be released in the fall.