WC Saga Goes Back To The Drawing Board

Over at the forums, Psych has unveiled the latest new ship to make it in to the WC Saga mod for Freespace. Once again they have managed to transform a ship from a drawing previously only seen on the "Making of WC3" CD-ROM in to a full 3D model.

As mentioned in the artwork, this is a Kilrathi cruiser. But it’s very different from the notorious Fralthi II-class cruiser from WC3, so it’s assumed as a different ship class. The reasons we decided to classify this warship as a light cruiser is because not only does it fills in the gaps for a light cruiser (the Fralthi II is a heavy cruiser), the existance of a Kilrathi light cruiser is also confirmed through Page 49 of the Wing Commander 3 novel. 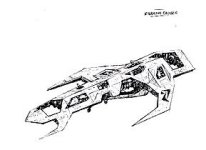 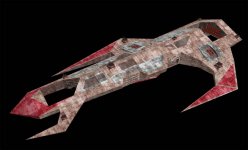 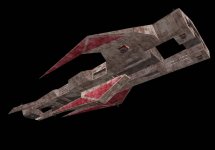 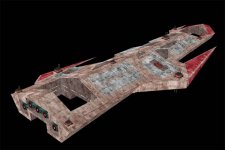 Approximate length is 500 meters and tonnage is around 17,000 tons. Fighter complement is eight fighters, a single squadron. This cruiser’s weaponry has to be balanced so that its less then the heavy cruiser (4 Anti-Matter Turret, 11 lasers) but more then the heavy destroyer (3 tachyon turret, 10 lasers). After much thought, we are making this cruiser’s weaponry to be 5 tachyon turrets and 10 laser turrets, as well as a cruise missile/torpedo launcher.

You can read more and comment in this thread.

EA has announced that it will be showing 23 titles at next week's Electronics Entertainment Expo in Los Angeles. These include their eight annual sports franchises, plus GoldenEye Rogue Agent, Battlefield 2, Battlefield Modern Combat, Catwoman, Def Jam Fight for New York, Harry Potter and the Prisoner of Azkaban, LOTR Battle for Middle Earth, LOTR The Third Age, Medal of Honor Pacific Assault, The Sims 2, The Urbz, Burnout 3, TimeSplitters Future Perfect, Armies of Exigo and Black & White 2. There will certainly be other surprises and minor announcements at the show as well. We'll be in LA next week to report live from the show.

You can find the full press release here.