Rambo was digging around in the old movie vault and came across Implicated. It's a low-budget 1998 movie starring Elizabeth Barondes who played Panther in Wing Commander 4. She's even sporting the same hair style, so Rambo was quick to grab some screen captures and send them to us. 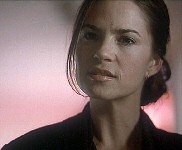 The one and only reason why I bought it was that it contains Elizabeth Barondes, in other words my most favourite female WC character ever, Tamara "Panther" Farnsworth. :-) The significant bonus is, that she's wearing exactly the same hair-style as we know from WC4. :-)

Panther won the "Miss WC" contest held by Berserker79 a long time ago, so I thought there might be more of the people who could enjoy at least the screenshots as much as I did the whole thing in movement. ;-)

He's got a bunch of other pictures here.

Wing Commander Galactic Conflict has gotten a bit of a face lift. They've got an actual website in addition to their role playing forums now. It provides a little background and cleans things up a little, though not all the links do something yet. They'll also be focusing more on Kilrathi conflict in the near future with their game.

Sylvester has started up a new WC role playing game called Wing Commander: The Second War. It takes some wacky liberties with the WC universe, but if you're looking for outrageous weapons and more Kilrathi, that's where you should go.

If you missed it earlier, Penny Arcade did a comic referring to the EA Super Heroes we mentioned earlier this week. Here they consider the generic turn some of the Electronic Arts games have taken lately.