"Admiral," Kunzite called softly, making all the students snap to attention. What they weren't ready for was a cloaked figure walking off the shuttle. Chris stared at the Admiral for a moment, trying to figure out why he would be cloaked. The entire academy got the shock of a lifetime when two slim hands appeared and pulled the hood of the cloak down, revealing sun colored gold hair, braided, bright azure eyes, and the fact that the Admiral was most definitely female.

'THE ADMIRAL IS A GIRL!' Chris screamed to himself.

One Hell-cat Of A Crash

Tolwyn sent us a nice piece of art which makes for a great background image. It features a Hellcat that has been shot down and has crash landed with two Ekapshi fighters flying in the background. You can read the comments on this artwork or contribute yourself in this thread. The moral of this story is: Don't fly Hellcats. 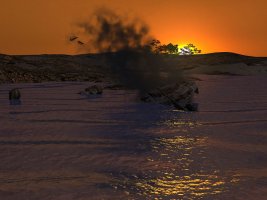