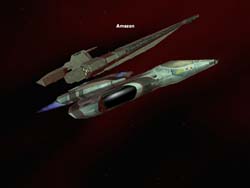 On the subject of really cool patches, Jonathan Scobbie has been up to some fine work as well. Back in January a patch for fixing the speed issues with Privateer 2 Deluxe was also posted on HCl's website. From the readme file:

This patches the windows version of Privateer 2 to make it playable on modern computers. Just copy the EXE to the P2 install folder and run it in a DOS box (so you can see the output) Currently the UI and space combat is patched. A few parts are still fast, but only the audio is affected, its 100% playable now! Check Mario's site for updates.

The patch can be downloaded here (2.2KB, scroll to bottom).

Just thinking about this picture makes me motion sick for some reason. I'm not quite sure if Hawk is about to pull out his knife and kill that girl or bow and ask her to dance.