When it rains it pours... good news. The Destination Software home page has a section for Wing Commander! They haven't posted any details yet... but they do have the BOX ART! Check it out... 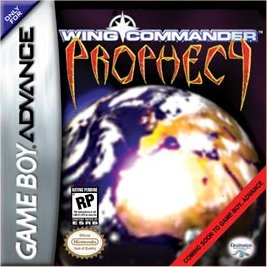 We crossed our fingers and hoped it would happen... and it has! Raylight has apparently announced at the E3 that they will be producing a Wing Commander game for the GameBoy Advance. IGN Pocket has the wonderful, wonderful news in this article. Here's the important bit:

The team informed us that they recently signed with Destination Software to produce Game Boy Advance versions of Wing Commander Prophecy, the PC space-combat game released several years ago, as well as Freekstyle, the soon-to-be-released PlayStation 2 over-the-top motocross game. Both games will use the team's BlueRoses technology for their 3D engines.