After another four-year hiatus, the CIC Mail Bag is back! Special 15th Birthday edition!

Searching through online articles on Galactic Civilizations 1, I stumbled across your old article here: http://www.wcnews.com/news/update/7002

It was only after examining the links to other articles that I found this: http://www.wcnews.com/news/update/6939

ChrisReid: Yes, this is seriously a guy emailing us to complain about a minor typographical error from 2006.

Dundradal: Mr. Morrison? Is that you? From third period English?

Do you guys gave any high res images of Radio Rollins? I've been looking all over. I never realized until last week, he was Hanz in The Burbs. Thanks for any help.

ChrisReid: We totally agree that Courtney Gains is one attractive dude. All of our pictures are low resolution, but you can find more at IMDB. 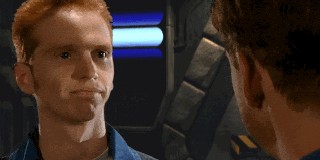 Cpl_Hades: Well as WC fans know, if you want the straight dope around here, you check in with Radio Rollins. So I did. It turns out that you can buy signed photos directly from Courtney Gains' official website. Unfortunately none of the photos on offer are from his time as Radio Rollins.

Dundradal: I don't think we should be condoning Radio Rollins promotion of straight dope culture, Hades.

I'm a big fan of the WC series. I understand you have the source code of WC 1 in your posession. What would it take to place a copy of that in my hands? I'm a programmer and I'm interested in porting the game to modern systems. I've done this sort of thing with old DOS games before and I'm confident I'd be able to do it again. Imagine, WC running on the latest Windows, Mac, and Linux natively, no dosbox needed! Willing to do it free of charge, as an open source project.

Cpl_Hades: I'm not sure why you have a problem with DosBox. It is a great way of running the games, and GOG even provides preconfigured packages - no tinkering required!

Dundradal: Why not just ask if you can haz Reconz?

Wow, I really did a number to myself by imploding and exploding at one of my favorite sites since back in the day.

This is not an ask to return. I could have been a douchebag and just made a new account. But that’s childish and you guys would have caught on anyways.

I just want you to know that between you and me Chris, I had a serious breakdown which I can only blame on myself. After recovering from some personal issues of having to relocate from my previous household, (Crazy neighbor with baseball bat going off against everyone who lived there, then decided he was going to attempt to attack my wife next), personal issues with the family, and not seeing the light of day much (literally), I thought I deserved a few weeks of nothing but drink and Ambien.

Dundradal: I hate it when people help me when I ask for it too. Damn Old Boys Club.

And you can see the result. I was sober and withdrawals when I wrote the “you elitist” speech.

I hope you know I didn’t mean a word of it though I take full responsibility. You can post this if you wish, maybe it might stop another troll. :D

Dundradal: To be honest, ChrisReid is pretty damn elite...at tech support. Glad he and AD helped you get your game working. Sic Semper Trolls!

I will still always look forward to news and etc. on the site. Take care, and thanks for being the best, well only Wing Commander fan site. (Didn’t mean it only but it’s a cliché’ I always thought funny.)

P.S: I have some Pinnacle profiles for the 3 Windows 95 compatible games for controller if you want. Let me know. (Pinnacle is that emulation program for keyboard to gamepad.)

ChrisReid: Sure, why not?

Dundradal: Bribery will get you everywhere.

I'm British - will there be anything geared to European players in terms of time zone?

Problem is that I have church on a Sunday morning... so I can't stay up that late.

ChrisReid: A third of the CIC staff lives in Europe. This time was chosen in 1998 in order to make it the most attendable for the most people. You'll just have to be tired at church!

Cpl_Hades: As a British person, I share your concerns. I've often considered moving abroad so that I can celebrate at a better time of day but I've decided that it may be a little excessive. Instead, having an early night the next day should sort you right out.

Dundradal: I've heard being British can be quite a problem. But I thought the sun never set on your empire.

I haven't really been reading any news for upcoming games for wing commander so this idea may have already been put on the drawing board. Plus I don't know who is in charge of the rights of the game so if it isn't you then please foward this if you think it is a good idea, maybe even get a pole going for it. I first fell in love with the saga back in 1996 when my father bought wing commander 4, it took me hours to tweak the old 486 to play the game smoothly. I was very impressed with the (at the time) cutting edge gaming experience, nothing beats an interactive movie where you're the star, especially playing as Mark Hamill! Anyways, some of the newer games today are very impressive and the worlds that are created are vast and very complex but today it is very hard to find a good space simulator game with a good story line as complex as the old wing commander 3 and 4. There is one game I recently played called "alpha protocol", which was a pain in the butt to get installed and running that required a patch to bypass the activation part of the install, but this game has awesome graphics and has a great story line where choices are made that effect the outcome of the storyline. Okay enough with that, my idea is to remake the old wing commander games 1,2,3, and 4. I know that using actors and sets or even green screen is expensive to produce, plus the original actors are too old and wouldn't be able to fit the script; however, you could use all cgi and recreate the characters in the images of the original games and give the space flight parts of the game a complete overhaul to add some really cool realism to it. You could even make all the 4 storylines/games into one big game but that might be to much of an endeavor for programming. I would love to see the old games come back to life for todays machines and game programming. Thank you for your attention and I really hope you consider something like this for the future.

ChrisReid: That is one long paragraph.

Dundradal: Ohhh, you meant "Kilrathi Saga." I don't think anyone fell in love with Saga, especially not in 1996.

Is there a possibility that there will be another wingcommander game? or maybe a remake? I played Wing commander Prophecy about 10 years ago and about 3 years ago i played it again and its still so amazing. but now, my cd's are gone and i wont be able to play it anymore...

I really hope they will make a new one or a remake (with the same amazing movie-like cutscenes). please, do you know if there is even slight chance that that will happen?

with kind regarts, Hendrik. 17 years old. from the Netherlands.

ChrisReid: We get this question a lot, and that's why we're here! The CIC is constantly pushing to help advance Wing Commander's future, and we're sure the best is yet to come! It's also great to see younger fans out there still!

Cpl_Hades: There is also good news about being able to play Prophecy again! As part of our 15th birthday news, we announced that Prophecy (and three more WC games) are coming to GOG. With HCl's Prophecy Enhancement Pack installed, the game is even better than when you first played it.

Dundradal: It's always good to see a friendly ship! Especially new ones!

Hey guys, just wanted to say thanks again for the front page news time and time again. WC is the only thing keeping me sane these days, seems like, and I'm happy to give back to the community.

ChrisReid: Thank you! We hear from some crazies once in a while, so the kind words now and then are appreciated!