kyrgiannis said:
Well, they ARE Klavs' models!
Click to expand...

Yes, I know... what I meant was that I recognized them from watching the video.
K

Whiplash said:
Yes, I know... what I meant was that I recognized them from watching the video.
Click to expand...

Oops sorry Whiplash. I guess I misread that...

kyrgiannis said:
Oops sorry Whiplash. I guess I misread that...
Click to expand...

I know I sound like an echo but: amazing! I too, can't wait for it.

These guys are doing great work! And I'm pleased to be working with them. It's a lot of work reducing and 'baking' these high poly ships down into something that's good for game level animation, but I think the polish and poise of this project will really wow you guys! I still have a grin on my face from the first time I hit the afterburners in an asteroid field!

Feel free to monitor my progress on this and many other projects at https://www.facebook.com/HangarBProductions

I find it interesting that everything is rendered as 3D objects with true light and shadow and even some camera movement even though the flight and combat is in a 2D plane. I had been expecting previously that the camera would remain fixed in the "overhead" position throughout flight.
K

Ijuin said:
I had been expecting previously that the camera would remain fixed in the "overhead" position throughout flight.
Click to expand...

As a matter of fact we initially were designing a game with a fixed overhead camera as you've very correctly been expecting. So the very first concept teaser and the previous non-playable demo where presented that way. However after the first test runs and following a suggestion by Klavs we decided to enrich the camera control system. Right now the game gives you an option to zoom in and out in fixed increments and either lock the camera on the north-south axis (as we initially planned) or unlock it in a "follow me" manner (which is a lot of fun when playing inside an asteroid field).

On the other hand the game will remain locked in a 2D plane. Otherwise the universe would not be flat, now would it?

I bet no one, out there, could win my Salthi once I get inside the asteroid field. I love those kilrathi models.
I couldn't just stay there watching without putting my own input, I guess.
I

kyrgiannis said:
Right now the game gives you an option to zoom in and out in fixed increments and either lock the camera on the north-south axis (as we initially planned) or unlock it in a "follow me" manner (which is a lot of fun when playing inside an asteroid field).
Click to expand...

Being able to see the depth-of-field (the vertical axis) in this manner also handily solves the question of how to determine whether or not your ship is going to collide with objects ahead of it. While the whole point of the 2-D gameplay is that players have no control of their vertical movement, we'll still be able to see if the asteroids would pass "over" or "under" us or smack us in the face.

Man! Never imagined the Gratha to tower over the Confed fighters like that!

Cats are bigger in size than humans and that explains the size difference between their ships. However, Gratha always gave me the idea of a big bomber ship although it has the same length as Raptor according to ClawMarks, off course.

When we started to create this project, we had serious arguments about the sizes of the ships between all Wing Commander games. We have realized that from game to game the sizes didn't make any sense to us (we even tried to normalize them with some kind of our own logic). Now that we are following Klavs concept, this matter falls to his hands. Frankly speaking, I personally like the analogies between the ships as they are put now but that is only my opinion, every opinion is always accepted.

By the way, what I mostly love on Klavs Gratha and I am not sure whether anyone have noticed it yet, is that the cockpits canopy is in the middle and under the ships hull. 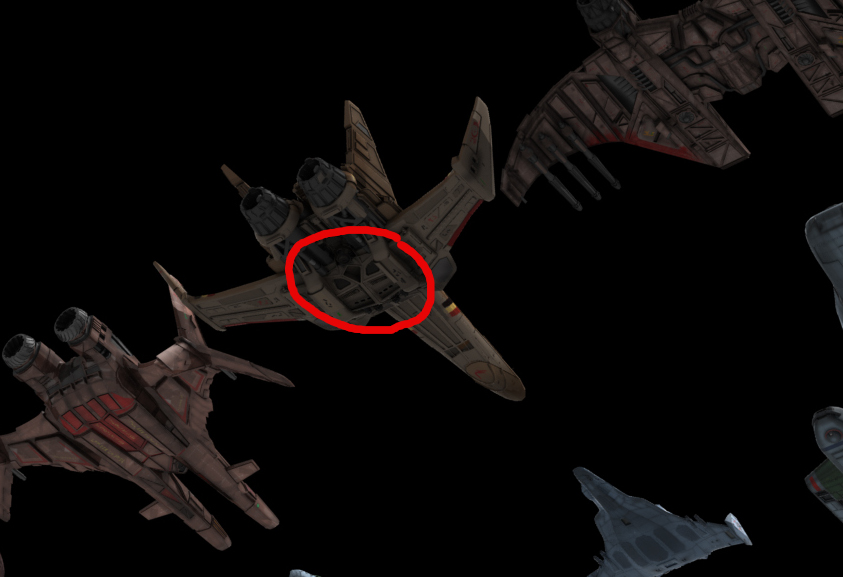 Gratha and Jalthi...Before, I was more fearful of the Jalthi, but according to this new scale, (new for me at least), I'd be more afraid of the Gratha due to it's size.
Assuming I would be a rookie pilot

Ijuin said:
Considering how much slower and slower-to-turn the Jalthi is,
Click to expand...

True. Jalthi, always was a slow target and I admit that I never afraid of them in WC1. However, keep in mind two things:
1. the gameplay has changed.
2. never underestimate the six laser guns.

I really believe that we gonna have much fun on the Multiplayer mode.

Four lasers, Two neutrons...I always respected those..But I felt it easier to avoid them when I first started playing.

Yes, easy to avoid since the Jalthi turned and flew slower than anything that you were flying. It sounds like the Jalthi will be a little more nimble in Flat Universe.
K

This is a small present for the coming WC CIC party! (and a chance to show off the hangar we prepare for the game along with some in-game models by Klavs

...and guys! Don't forget.
What you saw is what you'll play!