@Goliath Muwhahaha - I think they can be higher res, but still, that's super cool.

I think I found the limits for Kilrathi Saga; it's the image size in pixels, not the memory. I tried a simple white rectangle for all the ship views and at 320x200 pixels it works fine, but one more pixel, at 321x200 and it crashes as soon as you try to see it. To test memory limits, I tried a noisy rectangle for all the ship views since it will not compress well; the resulting SHIP.V08 is at 2.3MB and it works fine. 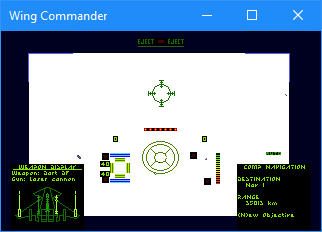 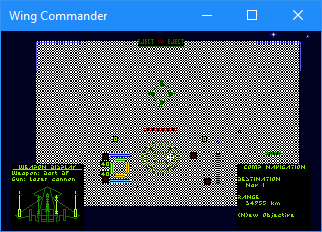 And the scaling is interesting: 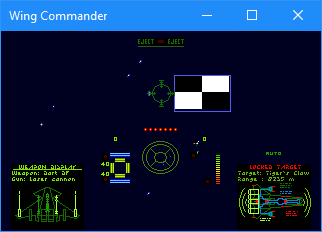 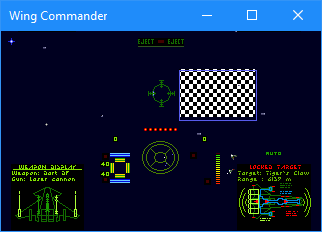 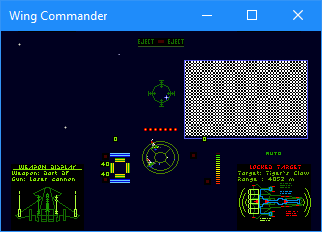 ... dispatch a subspace message to Admiral Tolwyn. We have engaged the Borg. 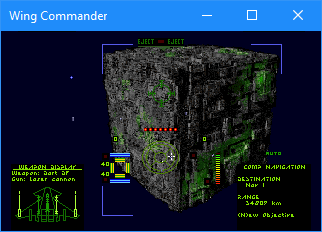 Ah, that's some good investigative work and information from those tests @UnnamedCharacter! It might just be a coincidence, but I wonder if that 320x200 limit is tied to legacy code from the game since that is the original native resolution? Anyway, it's good to know about this limit for now until there is a better solution.

Oh, and I was wondering @UnnamedCharacter, do you have a standard method to generate the origin points for each sprite? If you have any tips, I would be very grateful!
U

Goliath said:
If you have any tips, I would be very grateful!
Click to expand...

Sorry I have nothing. At first look it would seem to be the center point of the image, but it's not; it's not even the same point on the ship at different views. It seems to be a manually positioned rotation point for the image; whatever would look best.

Hehe, well thanks for the information anyway.

I've been doing some experimentation and it turns out the limit on sprites is 64,000 total pixels (which 320x200 just so happens to be). Thus, a sprite of *any* width and height that add up to 64,000 pixels is valid. So, if you needed a sprite of 100x640 for instance, that is a valid sprite that will work.

These limits can most likely be increased. I'm suddenly feeling motivated.
U

Taking this into account, we can adjust the scaling to maximize image sizes. If we crop all the images and calculate the surface area, we find that image 31 produces the largest value and therefore will be the one to constrain our scaling to about 34%. This will result in an image size of 277x231 for a total of 63987 pixels, giving us 13 pixels to spare.

This gives us an average of 4x the pixel density from the original sizes. 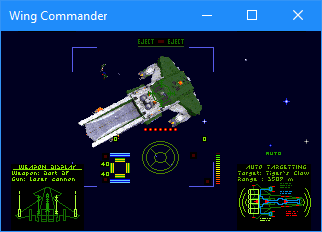 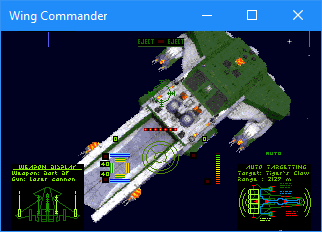 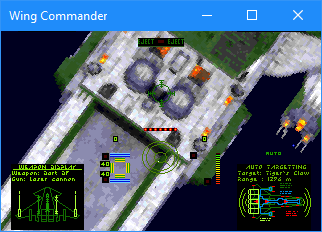 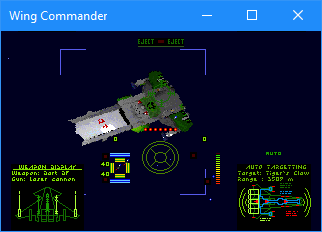 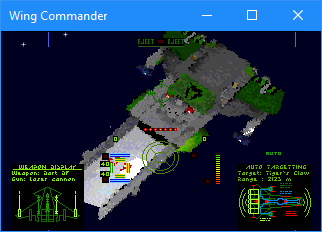 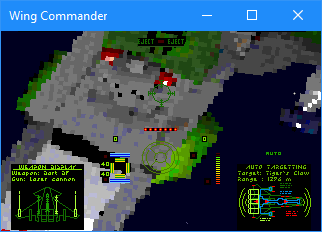 Haha, @UnnamedCharacter I'm glad to see your work and it looks like we're getting similar results! Since I had already typed this out, I'm going to post this so we can cross check results.

I've continued to work on the 2D Tiger's Claw renders @Howard Day provided now that we have a better idea of the limits to the sprite size. I've put together a SHIP file of the Claw that maximizes its resolution within Kilrathi Saga. To do this, I started with cropping the renders and then determined which image had the most total pixels. I then used that image to determine the proper scale to resize it so that it was close to but did not exceed 64,000 total pixels (in this case, the scale used was 34.11%). All of the sprites were resized using this scale and then used to create the proper SHIP file. Here you can see the results:

Keep in mind that the image files provided are already using Wing Commander's color palette so if you want to make modifications, you'll need to use this palette or the colors won't appear properly in game. In addition, I set up the origin points in the XML file to be the center of each sprite image. This isn't always accurate, but it should keep the Tiger's Claw targeted properly in game. Anyway, I hope this gives people a chance to see the updated graphics in action and maybe even learn a little about how this works.

Note: This only works properly in Kilrathi Saga. I did try the GOG DOSBox version and although it does not crash, graphical glitches can occur when looking at the Tiger's Claw.

Nice images @UnnamedCharacter! Did you use bilinear filtering or something similar when you resized the images? I just did a straight resize because I didn't want the background transparency to bleed into the image.
Last edited: Sep 22, 2018

If I recall correctly the WC engine supports more ship angles then what is in the game and image flip is not required either. I think this was done to save disk space at the time. Have you tried putting the 64(?) different angles in to see how well it works?
Last edited: Oct 21, 2018

here what i got with music_guru's test, and it looks gorgeous!

Goliath said:
Did you use bilinear filtering or something...
Click to expand...

I actually don't know, I just let ImageMagick do its thing:

Shades2585 said:
Have you tried putting the 32 different angles...
Click to expand...

UnnamedCharacter said:
I actually don't know, I just let ImageMagick do its thing:
Click to expand...

Ah, thanks for that. I'll give that a shot!
U

And to expand on the updated SHIP.V08 provided by @Goliath, you can also use the WCToolbox to complete the effect (proper scaling limits) by updating the EXE file. Using the appropriate XML file from the download:

Using ImageMagick really made an improvement (so thank you for that @UnnamedCharacter)! Here are some new images:

I've also attached updated versions of the new Tiger's Claw SHIP file for Kilrathi Saga and sprite bundle to use with the Wing Commander Toolkit.

You guys are gonna have to do a full Sprite update pack...
H

HAHAH, yeah. the thought had occured. so you guys want the sprites rescaled down to 34% of what they were? I can do that and give you nice sharp, non bilinear filtered and blurred images?
H