With all the work for the WCToolbox, I have observed and learned quite a few things about the inner workings of Wing Commander. I thought I would do a series of post highlighting this information. I suspect some of this information will be old news to WC veterans; and some will have no practical application as they are just curiosities.

Let’s begin with starting the game itself: executing WC.EXE.

There are many posts online detailing the command line options and cheat codes available, but I don’t think I have ever seen a post highlighting some of the following options:


e|t|v selects the video mode: EGA | TGA | VGA; the appropriate files must be installed (you can have all *.EGA, *.TGA, and *.VGA files in the same GAMEDAT directory since they have unique names)​
a#|p|r selects the audio mode: AdLib | PC Speaker | Roland (for AdLib look into your CFG file for the number)​
For example:

These are the cinematic scenes which can be previewed from the command line:

There are several versions of the game executable; from the original DOS release, to the Kilrathi Saga, to the Good Old Games. To see the version number, while in flight, press Ctrl+V. 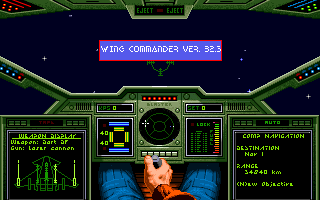 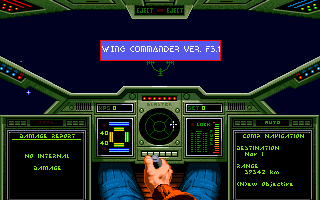 The following table includes all the versions I am aware of. If you have a version not listed, please let me know.

UnnamedCharacter said:
If you have a version not listed, please let me know.
Click to expand...

My assumption is that it would be the same as the GOG version, but have you checked the copy that EA has on their Origin service?

Wonderful stuff! I'm in the process of a move, but when I'm settled I'll help figure out versions. I suspect there's a bunch more -- there's at least two different Secret Missions 2s and I bet stuff like the Software Toolworks CD-ROM has a different version... and different disk formats might, too...
U

The questions vary depending on the installation.

Naturally, you can select one of the menu options by moving the cursor using the mouse, joystick or arrow keys, but keyboard shortcuts are also available.


S Start Vega Campaign
C Continue Campaign​
For later versions of the executable, you can also press J to calibrate the joystick. 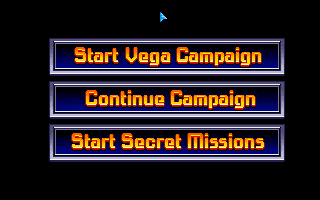 As everyone obviously knows, Wing Commander uses a series of images to simulate a 3-dimensional view of a ship, star post, or missile. The game cleverly reduces the number of images needed by using symmetrical ships and mirroring opposite views; for a ship, it can do so with 37 images, 17 for a star post, and 22 for a missile. Internally, the game actually makes use of 62 images arranged at 30 degree interval around an imaginary sphere.

The following shows the arrangements of those images; the top row of a box is the internal image slot index, the middle row is the image, and the bottom row is the actual image index with the mirroring value in parenthesis (0 no mirroring, 1 flip horizontally, 2 flip vertically, 3 flip both horizontally and vertically).

Now all of the above is to set the stage for the following question: Is it possible to use 62 images? Yes. 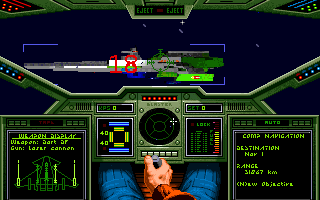 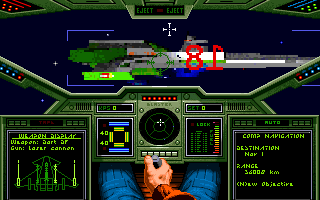 After modifying the game data files to expand the configuration to 62 images and updating the internal mapping within the game executable, we get the following result. 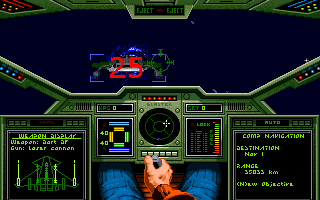 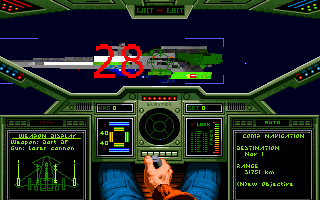 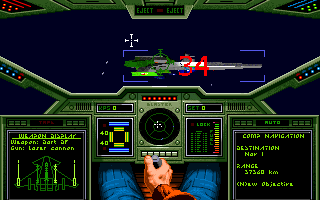 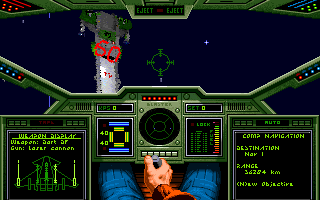 This is an all-or-nothing approach; all ships need the exact same number of images. Ships do not need to be symmetrical, although too asymmetrical will cause problems for collision detection, direction of flight, etc... I do not know if this would place memory pressure on the game, although probably not a problem for Kilrathi Saga.

Wing Commander II does have an asymmetrical ship that uses all 62 images: Ayers Rock.

Bandit LOAF said:
Wing Commander II does have an asymmetrical ship that uses all 62 images: Ayers Rock.
Click to expand...

Right, I remember @HCl sharing some thoughts about that a while ago: https://www.wcnews.com/chatzone/threads/hellcat-cockpit-in-the-wc2-style.27107/page-3#post-385216

UnnamedCharacter said:
and the bottom row is the actual image index with the mirroring value in parenthesis (0 no mirroring, 1 flip horizontally, 2 flip vertically, 3 flip both horizontally and vertically).
Click to expand...

These images are killer when it comes to illustrating how this is done, thanks @UnnamedCharacter! This thread is awesome!

Question:
I only see 0 (no mirroring) and 1 (flip horizontally) in the image, but I think there should be 2 as well?

Looking at the picture showing the 62 aligned images:
Say we start at #37.
Pulling the ship up leads us to #43 and #55.
Continuing that maneuver should show #61, but rotated accordingly (meaning that for each column images #61 and #0 need to be rotated in a different angle).
Still continuing, should show #49 and then #37 (that's the image that shows the nose closer to us), but flipped either vert or hor (I always mix these up), as it needs to be upside-down.

To finally come to my question:
Shouldn't there really be more than 62 slots?
I know that HCl also described it with 62 slots, so you guys are probably right.
Leaves me with the question, how the missing angles are rendered...

delMar said:
I only see 0 (no mirroring) and 1 (flip horizontally) in the image, but I think there should be 2 as well?
Click to expand...

2 and 3 even, yes - check out the third of UnnamedCharacter's images, showing the missile sprites. Basically, it depends on the number of axes of symmetry in an object. If you only have one axis of symmetry (as most ships do), then you only flip horizontally (or only vertically, if you had a ship that has asymmetric sides, but vertical symmetry). The only objects that typically have two axes of symmetry are missiles, and the only ones that might conceivably have three axes of symmetry would be those round WC2-style mines.

Incidentally, it's funny that the Kilrathi starbase *didn't* get flipped on two axes, because it's symmetrical both in X and Z axes. You'd think that would be something someone would have noticed, given the desperate need to save disk space for WC1.

Shouldn't there really be more than 62 slots?
Click to expand...

No, because not all images need to be repeated if you abandon symmetry - I mean, you already have half of the images you need included in the 37. If you open up one of the ship sprite compilations, you can see that the number of repeated sprites (conveniently marked grey) adds up to 25. So, take 37, add 25, and you wind up with 62.
U

The team which ported the game to Windows decided to add a few extra credits for Kilrathi Saga, but hidden by default. The following are the standard credits which loop during the introduction: 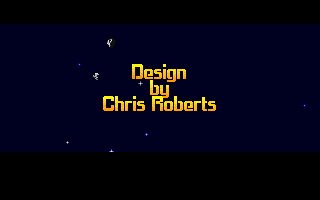 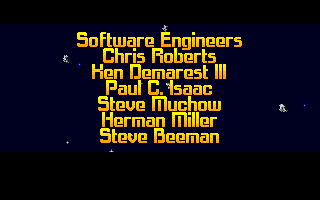 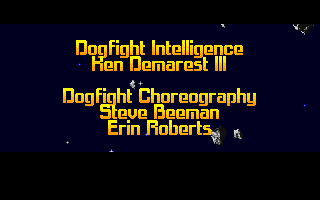 When including the following text (without quotes) "$#SAGA.EXE" at the beginning of the WINGCMDR.CFG file, this activates the extra credits: 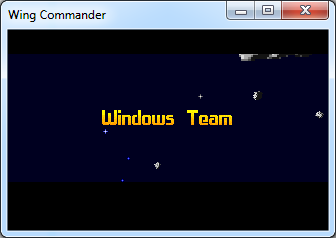 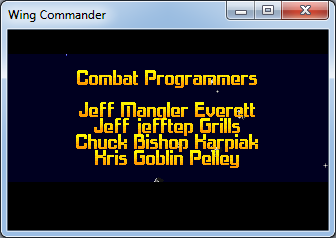 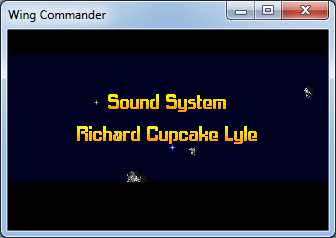 Notice the missing "95" in "Windows 95 Team", and the extra spacing. The golden text is displayed using images from the TITLE.VGA file, but only letters and not numbers are included; the DOS version has no need for them.
Last edited: Apr 15, 2018

UnnamedCharacter said:
Notice the missing "95" in "Windows 95 Team", and the extra spacing. The golden text is displayed using images from the TITLE.VGA file, but only letters and not numbers are included; the DOS version has no need for them.
Click to expand...

Hehehe. I guess they didn't consider it worthwhile to attempt to insert numbers into TITLE.VGA

. I suppose they could have used "Windows XCV" as a workaround

Well here is a quick image for you. It might need a little more work, but it's close.

Very interesting! I noticed the $#SAGA.EXE tag while digging around in KS, but never bothered to figure out what it was for. Might be worth reintroducing this, though the credits are clearly incomplete. In particular, the soundtrack was rescored by George Oldziey.
U

Useful information! Thanks; I'll add that to my to-do list. Lots of things were not done properly for KS SM2...

I've really enjoyed this thread (and other threads) on exploring and reverse engineering Wing Commander! Thanks for everyone's efforts and one day I'd love to help out.

One command line option you might want to add is 'z'. I think this indicates that Secret Missions 1 is installed. I was reminded of it when reading a GOG thread (https://www.gog.com/forum/wing_commander_series/wing_commander_all_sound_options_explained). Good work UnnamedCharacter!
U

The text of conversations or pilot speech can be customized during game play using a set of replacement variables. These variables allow for in-game specific values, such as number of enemies killed or for personalization, such as call sign or rank.

For conversation dialog, the following set of variables is available:


$C: CALLSIGN
$N: NAME
$P: NAME (never used)
$R: RANK​
If your rank ends with a period (ex: 1ST LT.) and is the last word of a sentence, the consecutive dots will be trimmed to only one. See Office conversation, Dialog item 34: That's all, then, $R. Dismissed. 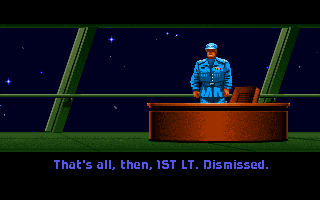 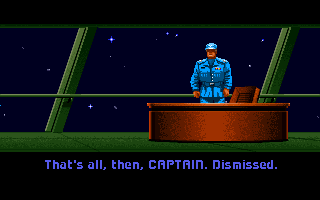