EmuMusicFan said:
There is another issue, maybe I've had mistakes pronouncing the names of many novel characters and clans before.
Is there a dictionary with phonograms? Thanks!
Click to expand...

There's not an official one to my knowledge. I do have a rudimentary section on my lexicon page; that's about the best I can do there.
E

A new screenshot (background is not yet finished): 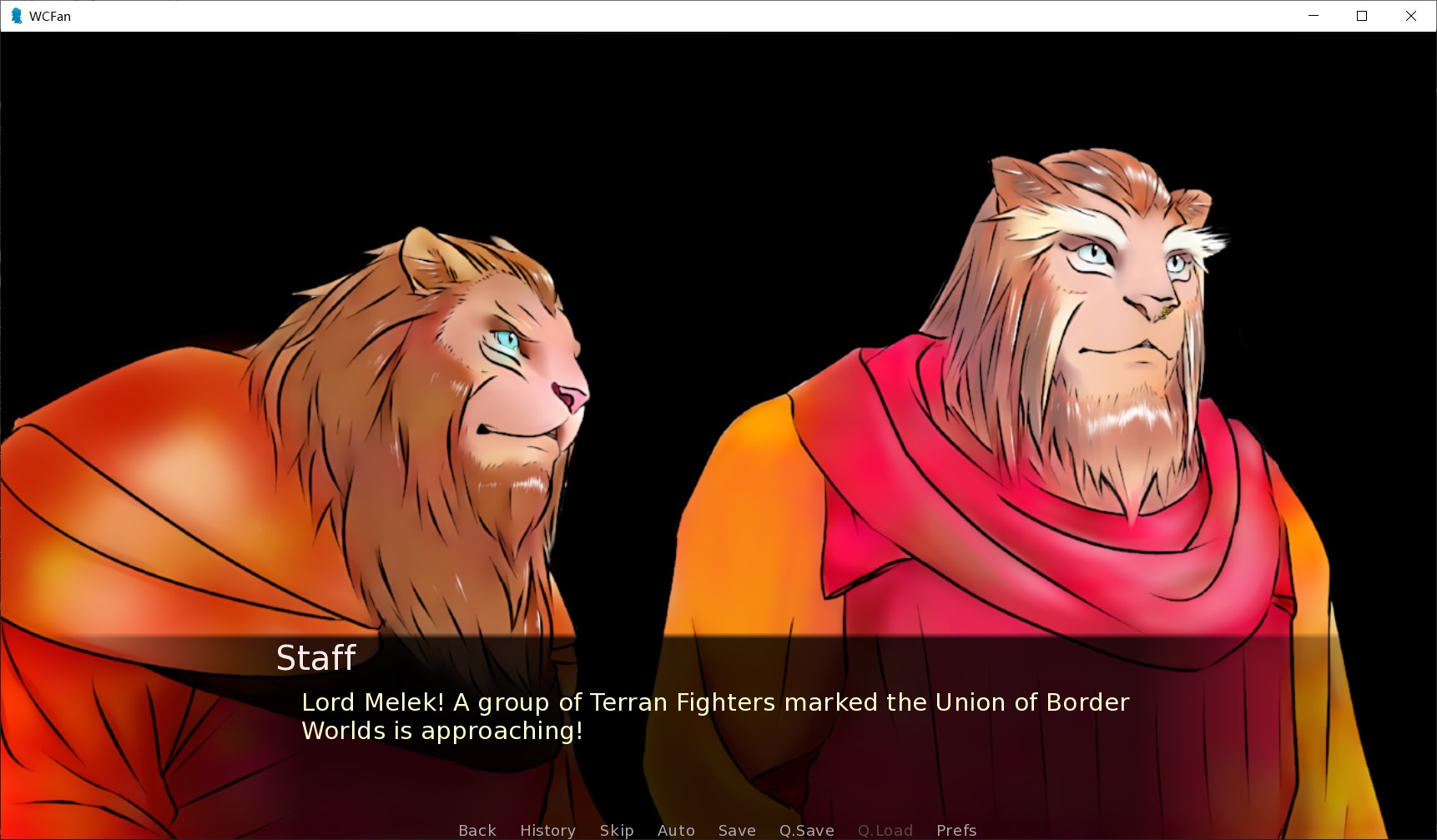 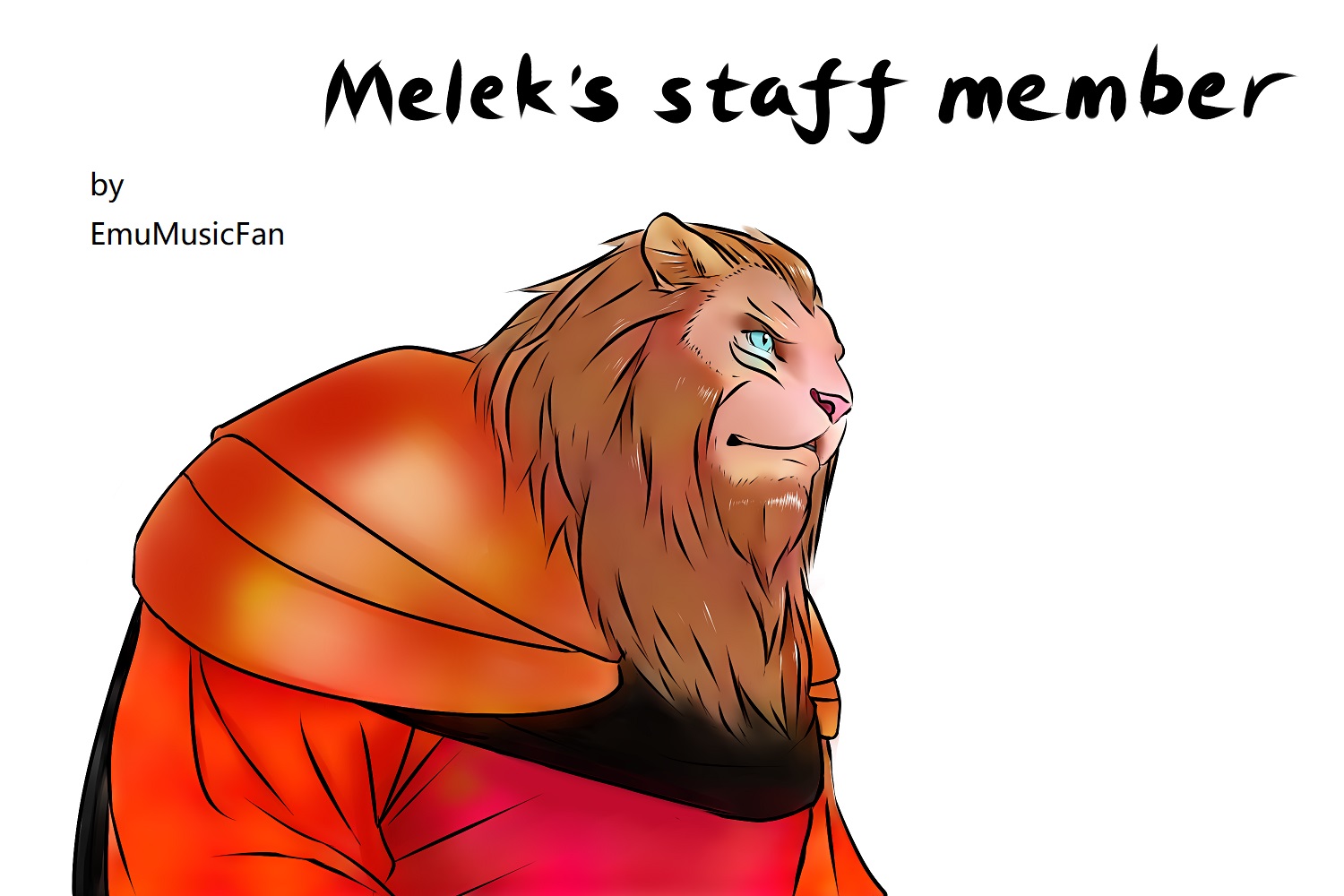 Yes, he was the guard standing near Melek in the good ending of WC3. I'm assuming he's from the Melek's clan and therefore looks more like Melek.

I guess this is him too, right? 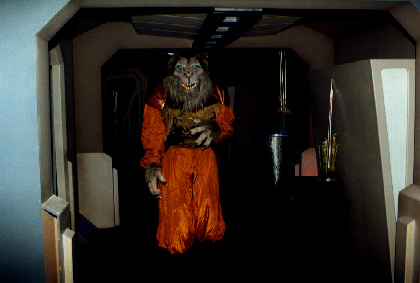 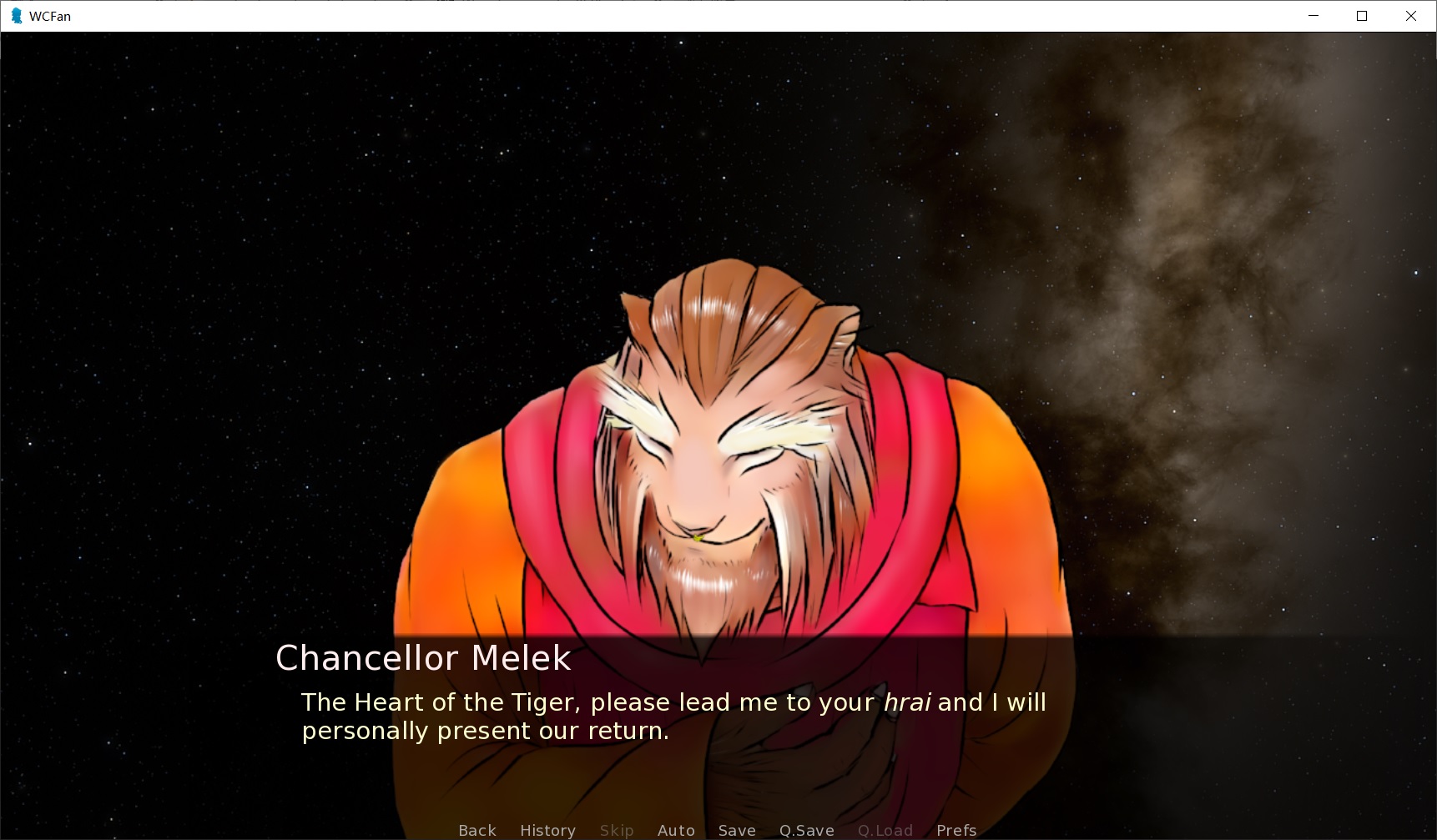 The High Resolution portrait is in floor #79. 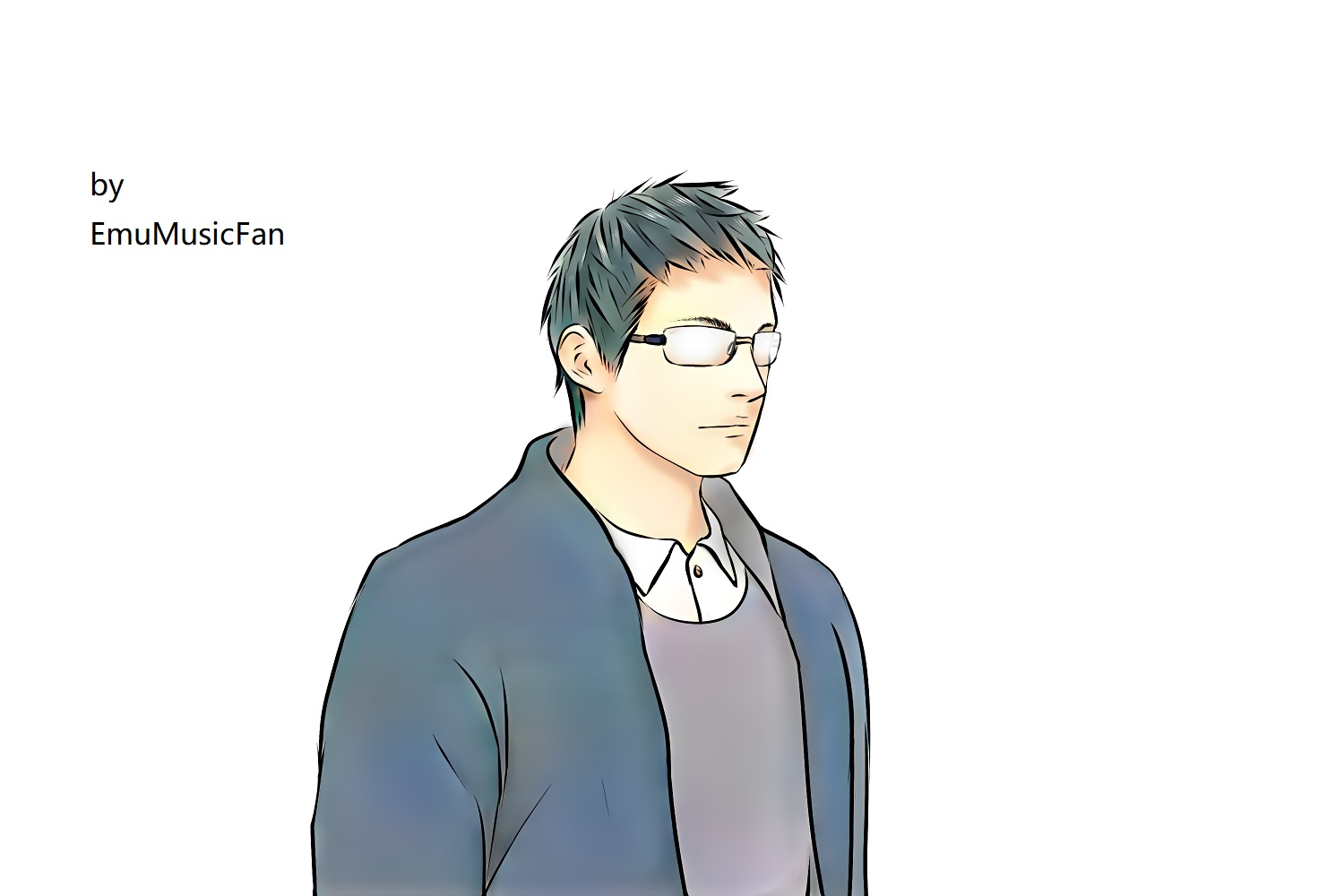 He is a common people, a classmate.

In my idea, I would like him to come across as somewhat detest the social unreasonable phenomenons, and often initiating some sharp topic.

His first class question will be: "Professor April, I'd like to know what topics are off-limits in this class."

EmuMusicFan said:
For my level, Melek's bowing pose is a little difficult to draw. But there was a real sense of accomplishment in actually drawing it. His talons are retracted, so they look shorter than in the original game.
Click to expand...

If anything, I think this is only an issue because your scenes - at least so far - appear to be only the torso and above. But within those constraints, I think the bowing pose came across quite well - I can see what you intended to convey, at least.
E

Wedge009 said:
If anything, I think this is only an issue because your scenes - at least so far - appear to be only the torso and above. But within those constraints, I think the bowing pose came across quite well - I can see what you intended to convey, at least.
Click to expand...

Thanks for your encouragement!

Got it! I'm trying to work that out within those constraints, too. Actually, when Melek bows for the first time in this part, the text window is hidden, so players could see the portrait unobstructed.

P.S. Actually here I would like to do an exaggerated portrayal of Blair worship. In my idea, this scene shoule be actually a rewrote by Melek's staff (for the cub audiences), not a strict reduction of the actual situation. Of course, when it comes to memes specifically, I'm letting my self go, haha. As for the two memes used in this part, the Luke one is familiar to everyone, but there is another one related to Mark Hamill... do you see it?
E

Plot idea: Because of a bet with his girlfriend, this guy chose several courses to be taken with the Kats...

Of course, thanks to the models of FF14 again...

The 5th Terran character... Also a student.
Of course, thanks to the models of FF14 again...

Col. Schwarzmont teaches in the Department of Military History of Confederation Fleet Academy. In 2668, He once briefly served on Admiral Tolwyn’s staff during the Earth Defense Campaign. In the story world, the novel of Action Stations is a companion piece to his yet to be completed study of the beginning of the war. "I have decided to take this format for a variety of reasons, the main one being the flexibility that it offers."

The uniform style of the Confederation doesn't seem to be exactly the same from series to series, so I played around with the original design a bit. Again, I know very little about military uniforms, so please be critical.
Last edited: Jun 13, 2020
E 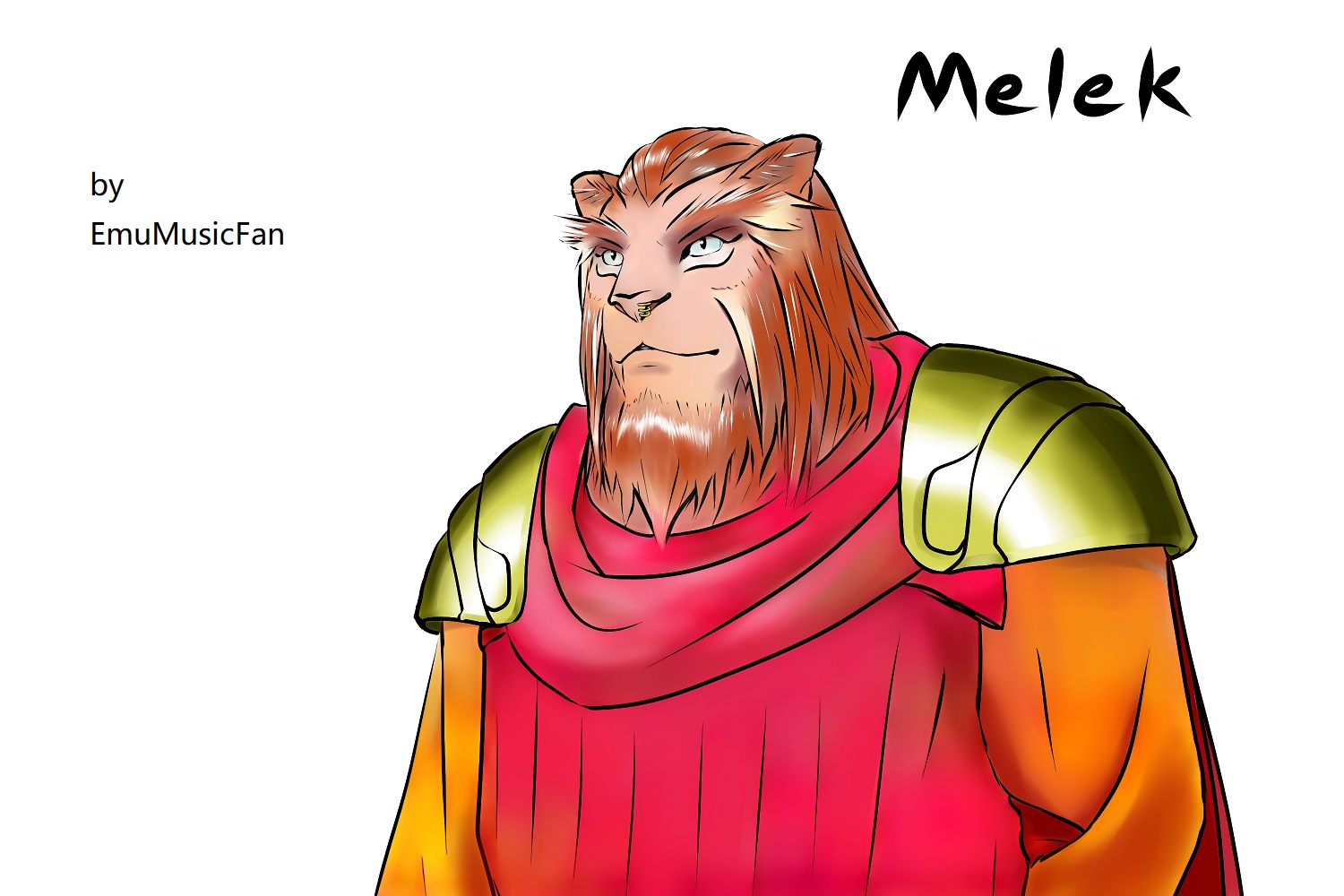 Trying to paint a portrait of WC3 era Melek. The WC3 version Melek was slightly younger and more serious looking than Chancellor Melek.

Chancellor Melek (WC4 Melek) had probably been through eight-eights of hell in the four years between the two games. Having your society collapse will have a tendency to do that to any kil...
E

capi3101 said:
Chancellor Melek (WC4 Melek) had probably been through eight-eights of hell in the four years between the two games. Having your society collapse will have a tendency to do that to any kil...
Click to expand...

Sorry, I guess I didn't quite get that part. Are you talking about the story or the two portraits?

Speaking of the story, I quite like that ending of the WC3 novel, it seems to be more informative.

P.S. I am drawing the portrait of Col. Schwarzmont as part of a group photo for two authors.

EmuMusicFan said:
Sorry, I guess I didn't quite get that part. Are you talking about the story or the two portraits?

The story bit. Melek would look younger when he was Thrakhath's retainer, not just because four years have passed between the end of WC3 (when he's cheedyachee) and the next time we see him in WC4 (when he's the Chancellor), but also because those years would've likely been quite stressful, to put mildly.
E

capi3101 said:
those years would've likely been quite stressful, to put mildly.
Click to expand...

BTW, from the novel, I guess the position of Thrakhath's retainer was actually a stressful position. The Crown Prince looked at Melek with an almost predatory look, and it was only because of Melek's administrative skills that Thrakhath allowed Melek to be his retainer. And much of what the Crown Prince did was in defiance of the interests of the other nobles of the Empire.

I guess there could be another reason besides could explain the change in Melek’s appearance: Chancellor Melek needs a more old and steady political public persona. What is more, the Blair worship is also at least a part of the persona. 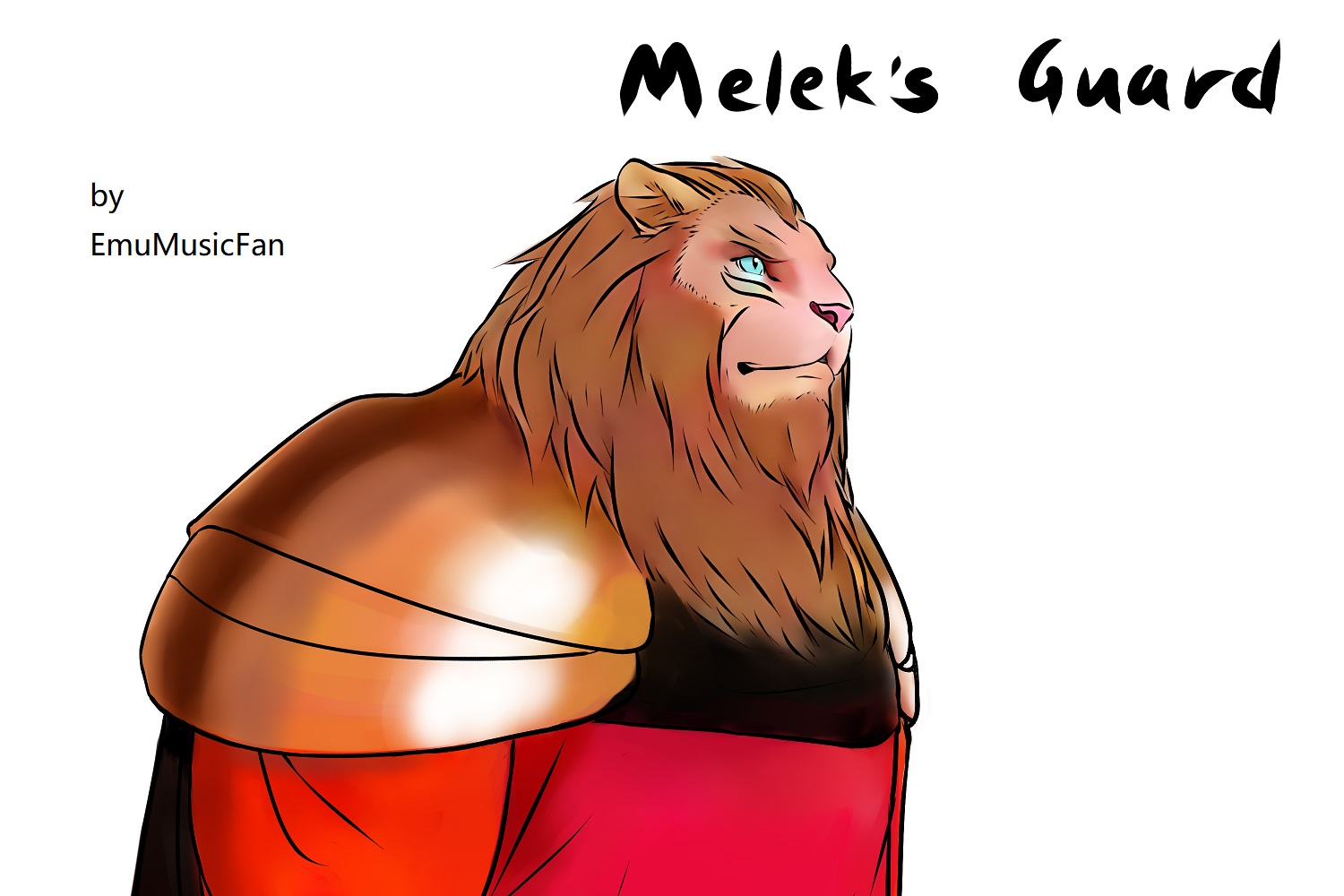 L.I.F. said:
I'd be curious as to how you'd tackle the uniforms and armours seen in WC2.
Click to expand...

Well... Although there's no complex armor exactly from WC2 involved, I'm trying to draw metallic textures now. It's still rough, but at least it's not a plastic surface. 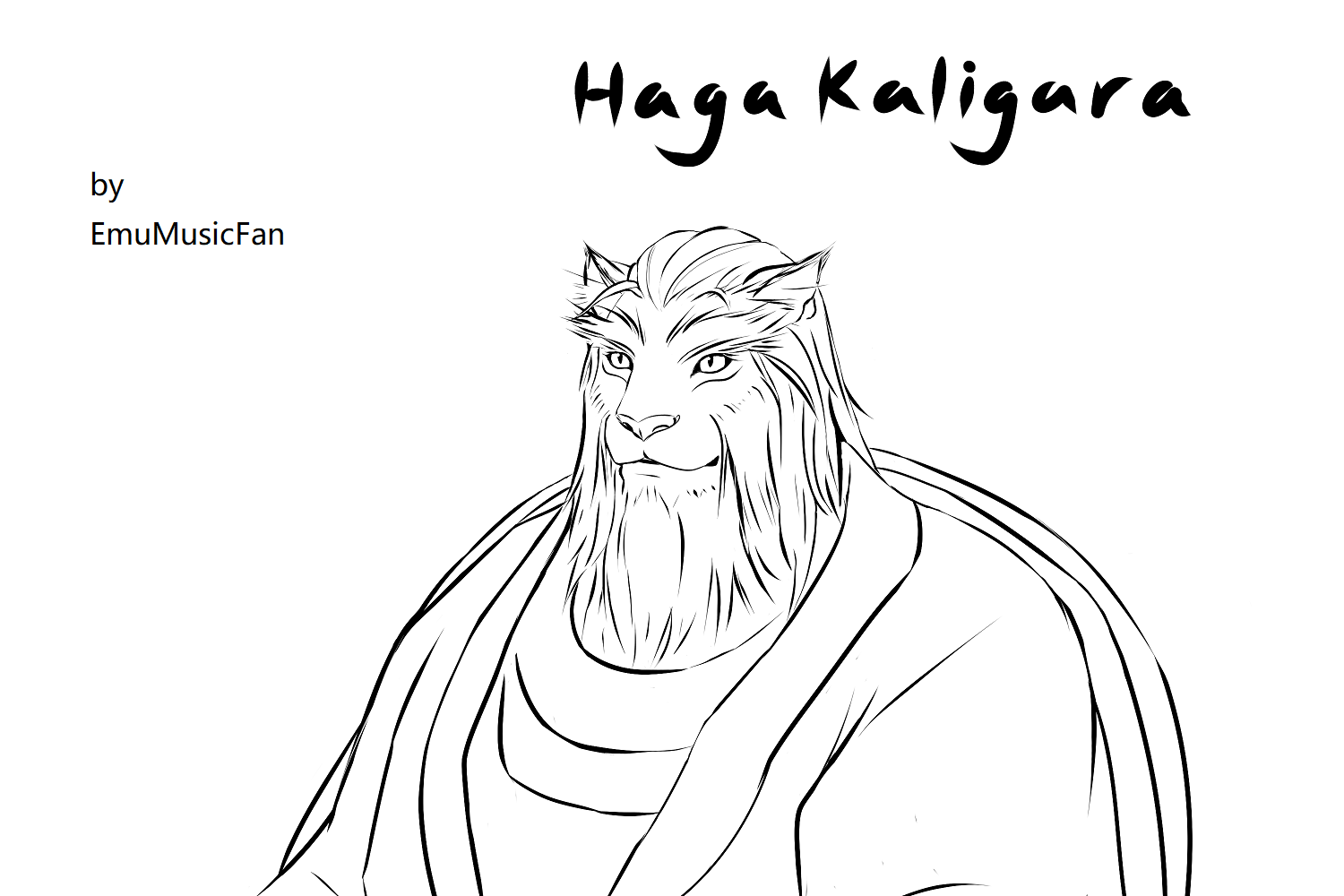 Haga Kaligara is a former pilot of Imperial Claw who was on the McAuliffe Ambush and survived more than 35 years to see the end of the war. He has his willingness to be thanked for providing his personal diary and flight logs to Terran historicle circles.

Fan Fiction expansion: A wealthy commoner born, very good looking, happy-go-lucky plus confident, super lucky retired veteran. He accepted a request from a documentary film crew and is now talking to these crew members at home about his younger days.

@capi3101 , would you please check those Kilrah lines? Thanks so much!

@capi3101 , would you please check those Kilrah lines? Thanks so much!
Click to expand...

I would certainly hope never to be considered an irrelevant friend to anybody. But at least as written it's only referring to a single friend and it's grammatically incorrect anyway (modifiers go after nouns and verbs, and the first person possessive pronoun ni' is missing entirely).

(Thrakhath says you must be crushed and then eaten for such a mangling of the tongue, of course, but then again he's getting kind of old and crotchety at this point so I wouldn't pay him much attention as long as you can outrun him. He's heading your way now though, so I'd get a move on if I were you. And I'd appreciate it if, when you see him, you don't say anything about me calling him old and crotchety...)

Depending on the context you're looking for, for the mid-section you might also consider:

The other is closer to what was originally stated though.

EDIT: I'm also not sure which form of "academy" to use in this case. I have daigga = "big school", assuming laq Kaligara is a commoner and didn't go to an academy for thrak'hra either to learn or to teach. Daigrasiv = "military school" would also work in its place, or you could just use thrakdaig = "university / great school" instead. If you wanted to go all out and formal, thrakdaigrasiv = "military university" would be the most specific form (but probably unnecessarily so).
Last edited: Jun 18, 2020
You must log in or register to reply here.
Share:
Twitter Reddit Pinterest Tumblr WhatsApp Email Link
Top