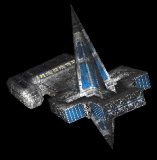 Taken some flak? Make it better at one of the many repair stations found around the systems.

Bestinium, otherwise known as "Hole in the Wall," is widely known for its lousy food, polluted air supply, poorly maintained facilities and possibly dangerous employees. Nonetheless, it has a loyal customer base which swears that decent, efficient repair service - combined with a decidedly interesting stay ― is worth return visits. People claim that the station personnel's verbal abuse of anyone they considered to be "barking stupid" and their physical threats against all "obnoxious whining gits" cleanses the soul. Oddly enough, Bestinium has earned itself the reputation of being a center of creativity, and growing a number of itinerant poets, musicians and tarot card readers can usually be found there.