Lol! Yes, that ship looks "Imperial Star Cruiser" big. If I were facing something that size while flying that Hognose bomber, I'd look at the battlecarrier, then look at my (relatively) puny torpedoes, and think "you've gotta be kidding me". Hopefully bombing runs against ships of that scale will be of the "several bombers all need to deliver torpedoes, not just the player" sort, like the Hakaga bombing runs in Standoff, as opposed to the "two or three torpedoes and you're done" sort seen in Wing Commander 1-3.

I also hope that there's some good characters and storyline behind these battles--I want to feel emotionally invested in the battles like in Wing Commander--even if there's no voice acting or CGI character models, I'd still like to get to know the rest of the squadron and the setting.

Howard Day said:
None whatsoever. This is a pure Space combat sim with campaigns and missions and multiplayer support.

Here's a preview of the 4km long battlecarrier...
Click to expand...


Does this mean that the adventure part of the game has been dropped?

...and about this 4km monster - in WC 1 & 2 it was always like flying against a wall of pixels when you got too close to a capital ship or a base - won't this be happening here too, especially by a ship of that size? Or do you have a workaround to avoid that?

Anyway, looks fantastic so far! Can't wait to play it

capi3101: Oof, that's gonna leave a mark.
ljuin: Yep! So.. this one is not the normal capital ship you'd go up against. this is one of the end-level bosses. The way the aliens break up their forces is different from the human navies - in that that carry their entire manufacturing base with them. These are giant forge barges that produce all the ships and weapons. These guys have almost no real defensive ability, instead relying on swarms of Corvettes: 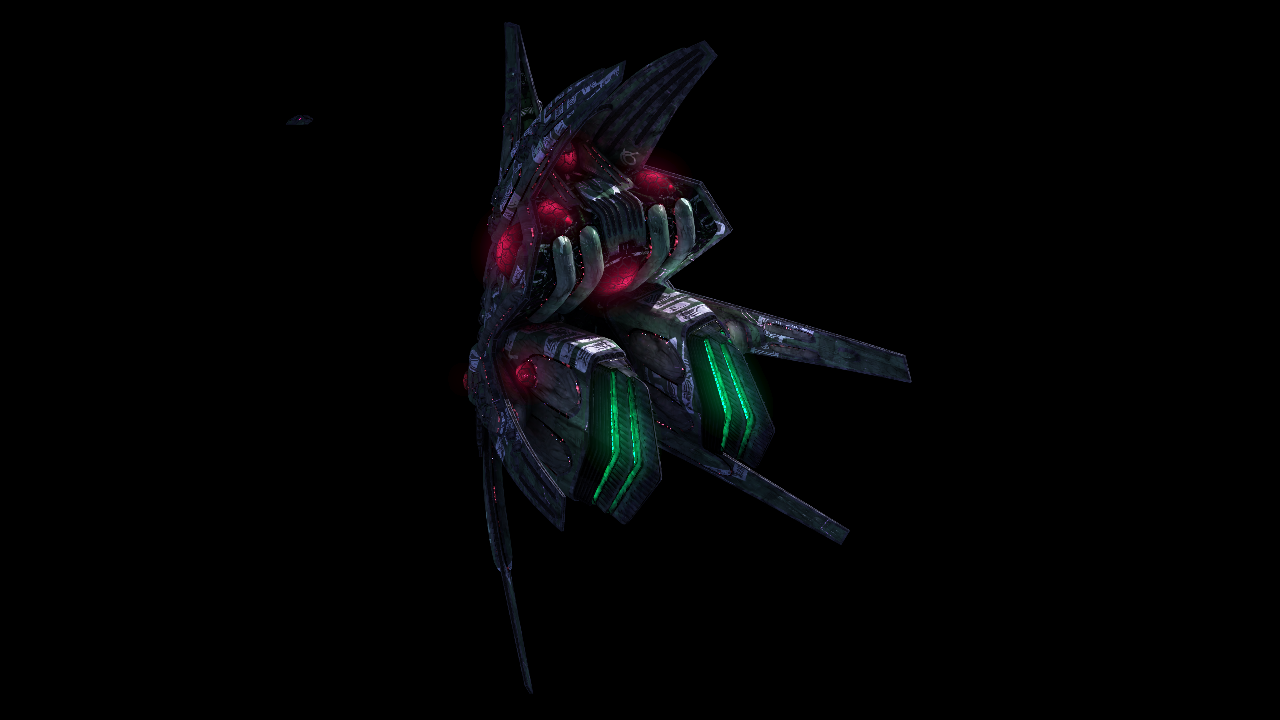 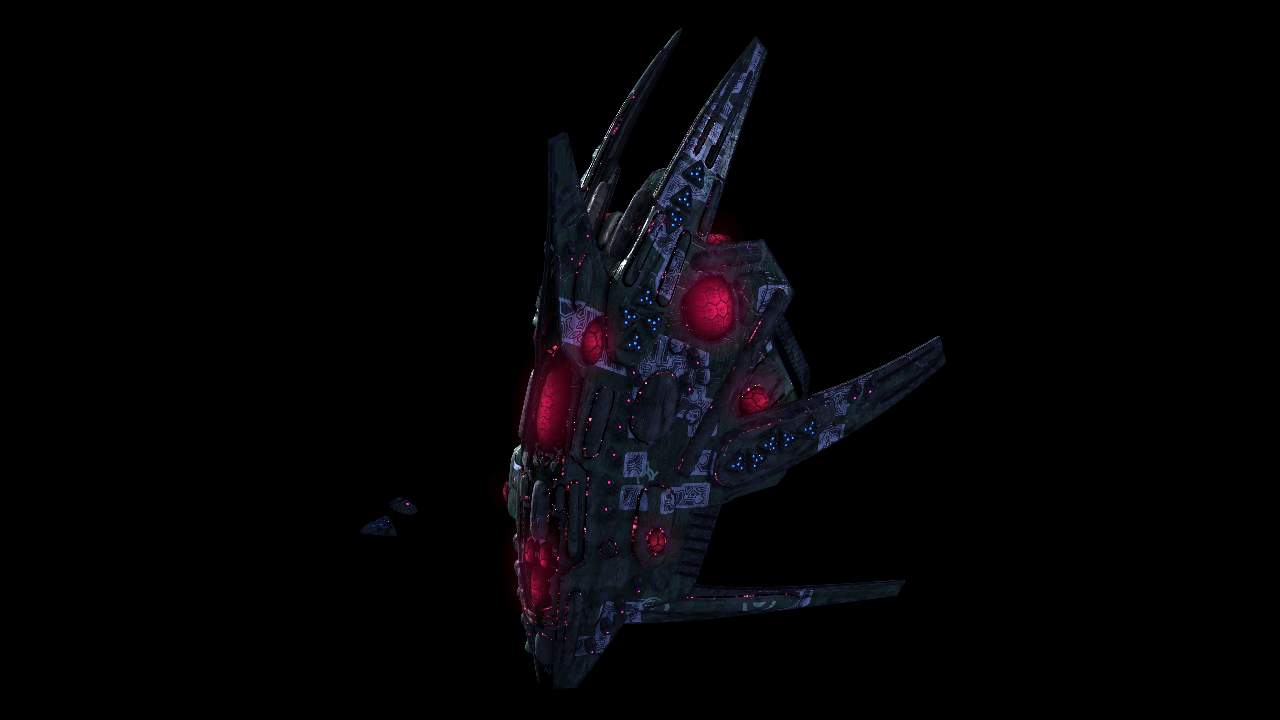 to take out the invading force. These guys are about 70M tall, large, slow, anti fighter gunboats.
Anyhow, yeah... the battle carrier is an end-of-game opponent - if it goes down, it will be with the support of damn near the entire human navy.
and that'll look like this!

Oh, and one other thing - those Torpedoes the Hognose is sporting...Those are *shielded* torpedoes. Yeah.

Death Angel: Oh, absolutely not! The only change is that we've recognized the scope of what we're trying to do, and in an attempt to release something to the public before time ends we're just going to do a multiplayer game to start. This will also let us get valuable feedback on the gameplay, and help us improve it before we release the full game.
As for capital ships, we recently made the decision to make anything larger than corvette size an actual 3d-poly based object. This is important, because in order for this to work, they can't move around a whole lot. (They're using static, prerendered texturs and lightmaps) and capships fit that bill. That ship in the short flyby there is the actual in game model. We're already flying around it and it is *magnificent*. It's already invoking the feelings you get while watching the battle of endor...or anything with the Kilrathi Dreadnaught. This ship is a minnow compared to that beast, by the way. 4km is nothing when going up against Thrakath's ride.

That is pretty! Any chance of seeing capships exchanging epic broadsides, or are they primarily fighter bait, as in Wing Commander?
I

Howard Day said:
Oh, and one other thing - those Torpedoes the Hognose is sporting...Those are *shielded* torpedoes. Yeah.
Click to expand...

"Shielded" torpedoes? So does that mean they can survive a few shots from enemy defenders before being destroyed, compared to ordinary torpedoes that die with one hit?

Howard what did you think to take it on Steam Greenlight? It started yesterday and you have the chance to release it, after enough votes, on Steam

Here is the Link :

Howard Day said:
Plasteel: None whatsoever. This is a pure Space combat sim with campaigns and missions and multiplayer support.
Click to expand...

everything is awesome!
A

So for me to get it right, the fighters and corvettes will be sprites but all he other cap ships will be normal polygons with textures?

Also any update on the first playable version?

I have to say that when I saw your video at your site it was jaw dropping.. Instant Nostalgia of wing commander.
I also have to say that cockpit design and lighting in that video is out of this earth , I felt like I was flying a igniter inside a comic book or something! OS vibrant colors... The whole game has such a weird feel and look, very nice and interesting, different from what we are used now days. And different is usually good ;-)
H

Hey guys! Sorry for the long interval between updates.

Dyret: Yep, that's absolutely on the table.
Iljuin: Exactly. You're going to need to work to shoot down the human torpedo barrage. You will with the alien one too, but only because while the human bomber fires a shielded torpedo, the alien fires 36 smaller unshielded ones.

DeathSnake: Haven't got much of an opinion on it. Anything that helps indie game developers get their game out and make money is a wonderful thing.
AlienHack: That's exactly right. Works really well, in practice.

Here's the Alpha, Running in your browser, In Unity. We're still having some trouble getting the billboarding on the fighters to work right, but you can fly around your Carrier, an Alien Frigate, and BattleCarrier.
WASD to accelerate and roll, double Tap W to afterburn, and AD for a barrel roll. Q switches firing modes, E cycles missiles. Hold down Shift for debug movement mode.
http://www.hedfiles.net/WOSN_Alpha/WOSN_Alpha.html
Love to hear any feedback you guys have!

I don't know its some setting up on unity side but it looks very low res...sadly that makes the models look more like WC1 ^_^
Anyway the designs look good, flying works good. Would give the mouse pointer a bit more space to move around so that you might have some more finer movements.

Soundtrack isn't my taste but thats not much of a problem. Question, how do I leave the game? I alt-tab'ed till my mouspointer was outside the windows.
H

Thanks for taking a look! This is how the game is intended to look:

And we're going for the same Sprites as Ships thing as WC1 for the fighters.
Currently the way to exit the game is to close the tab its open on. I'll add and escape button that will exit, going forward.

The art looks good. The rendering is a bit wierd though. I get something similar to your screenshots but all the little windows and highlights upclose look like white pixels far away so it makes the ships looks really low res and grainy for some strange reason. I guess because it's alpha you don't have collisions in the engine yet. Also, there was one fighter that was flying in circles that you could only see when it would turn to face you. I don't know if that was intended or not.
H

Thanks, AD! I added in two PSN Cruisers last night, the Narvik, and the Litani River. Oh, I also added ship identifiers.

I still need to do the ones for the St Nazaire, but you can see how they look, and it's fairly cool. I did increase the flying speed, it's about twice as fast as it used to be, and the guns fire bolts that move faster.
I also tweaked the explosions to look better, and the ship textures to be trilinearly filtered, so there's not as much pixel crawl. I'm still working on the collisions, and that fighter flying in circles is a test case for the billboarding code, which we're still working on and trying to get working.
http://www.hedfiles.net/WOSN_Alpha/WOSN_Alpha.html
Enjoy!
H

So, Saturday I made a Destroyer - A much smaller version of the Cruisers that were in the build previously - they're very similar in role to early WW2 Destroyers - anti-torpedoboat support, AKA bomber screens. They can't support fighters on their own, but are fairly deadly gunplatforms against anything smaller than another cruiser.
Here're some in progress shots: 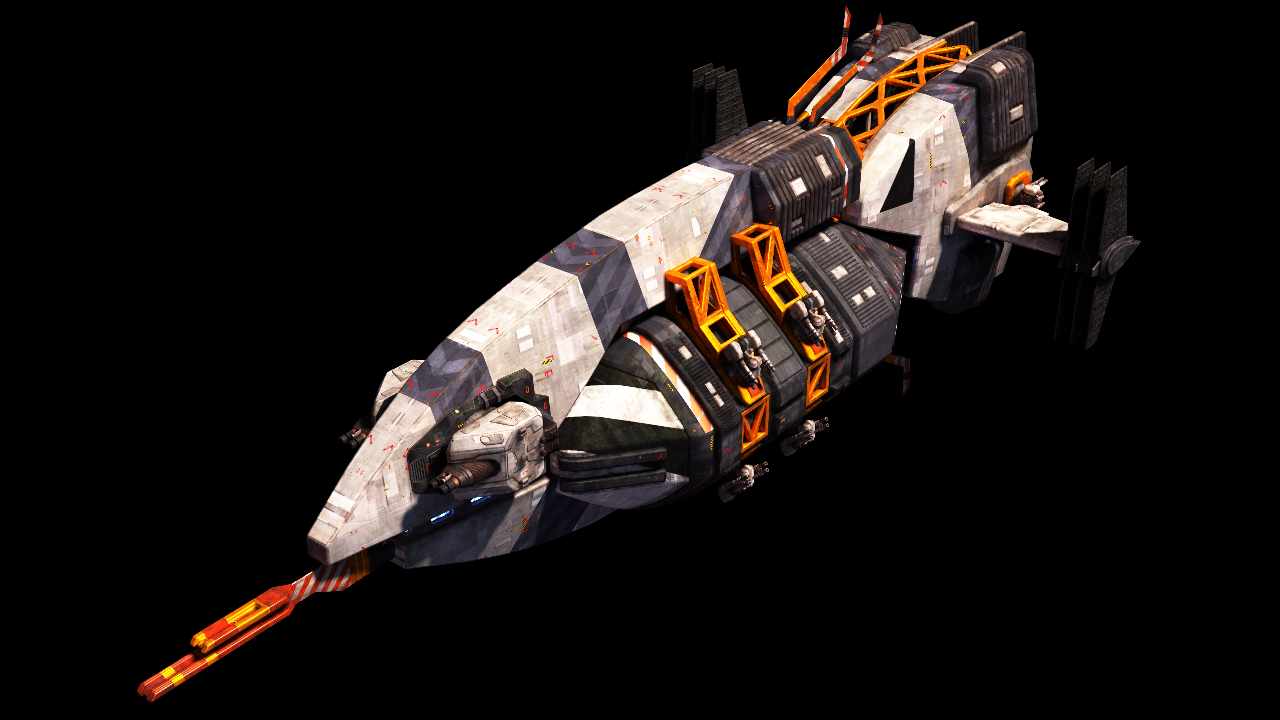 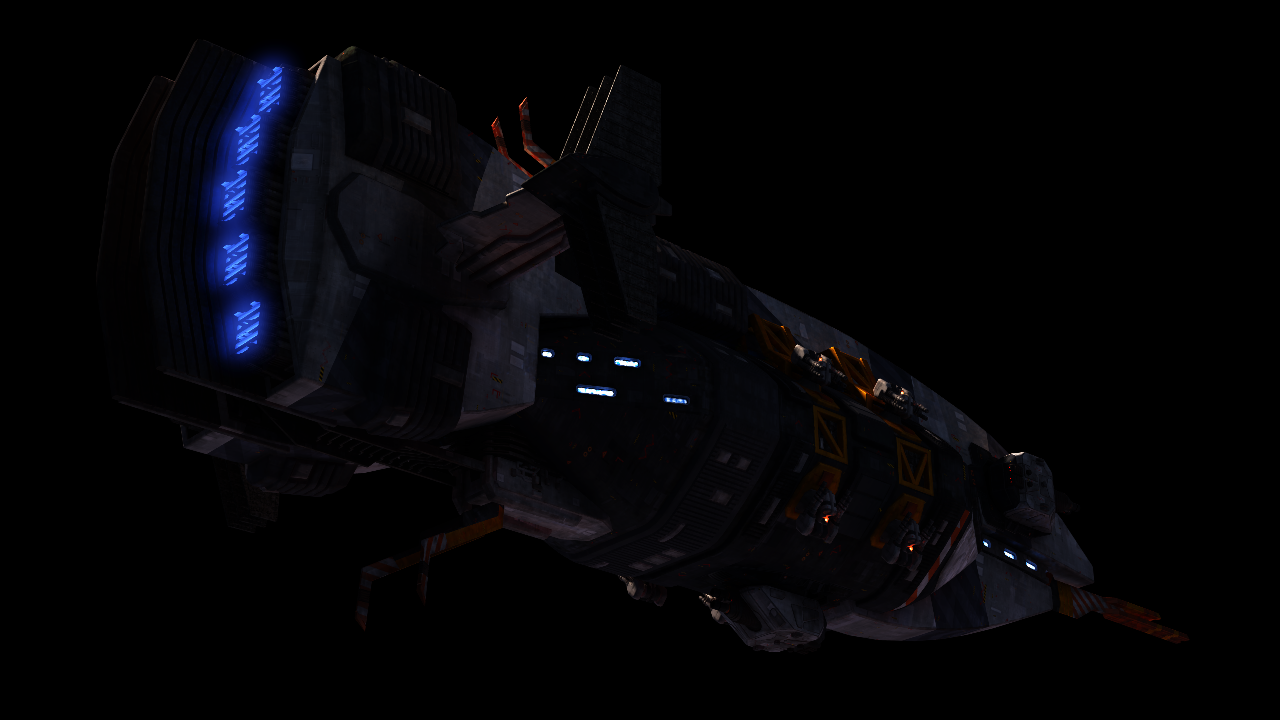 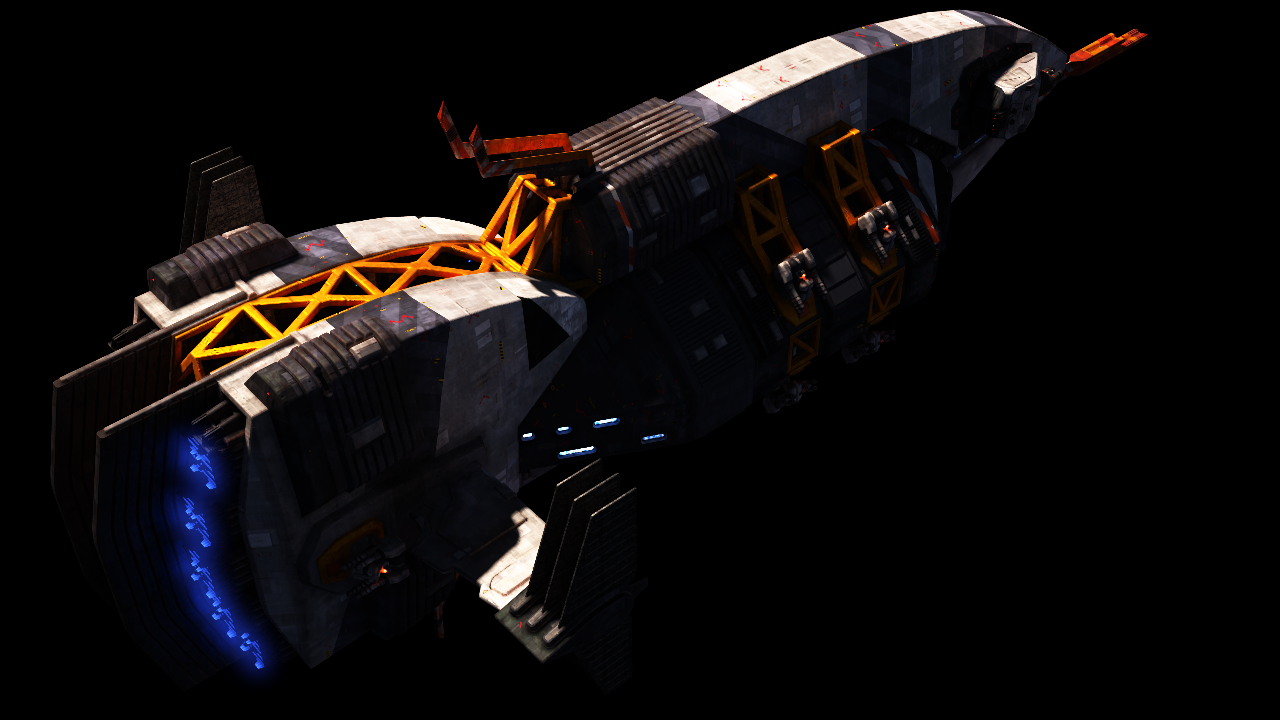 And here's the finished model in max: 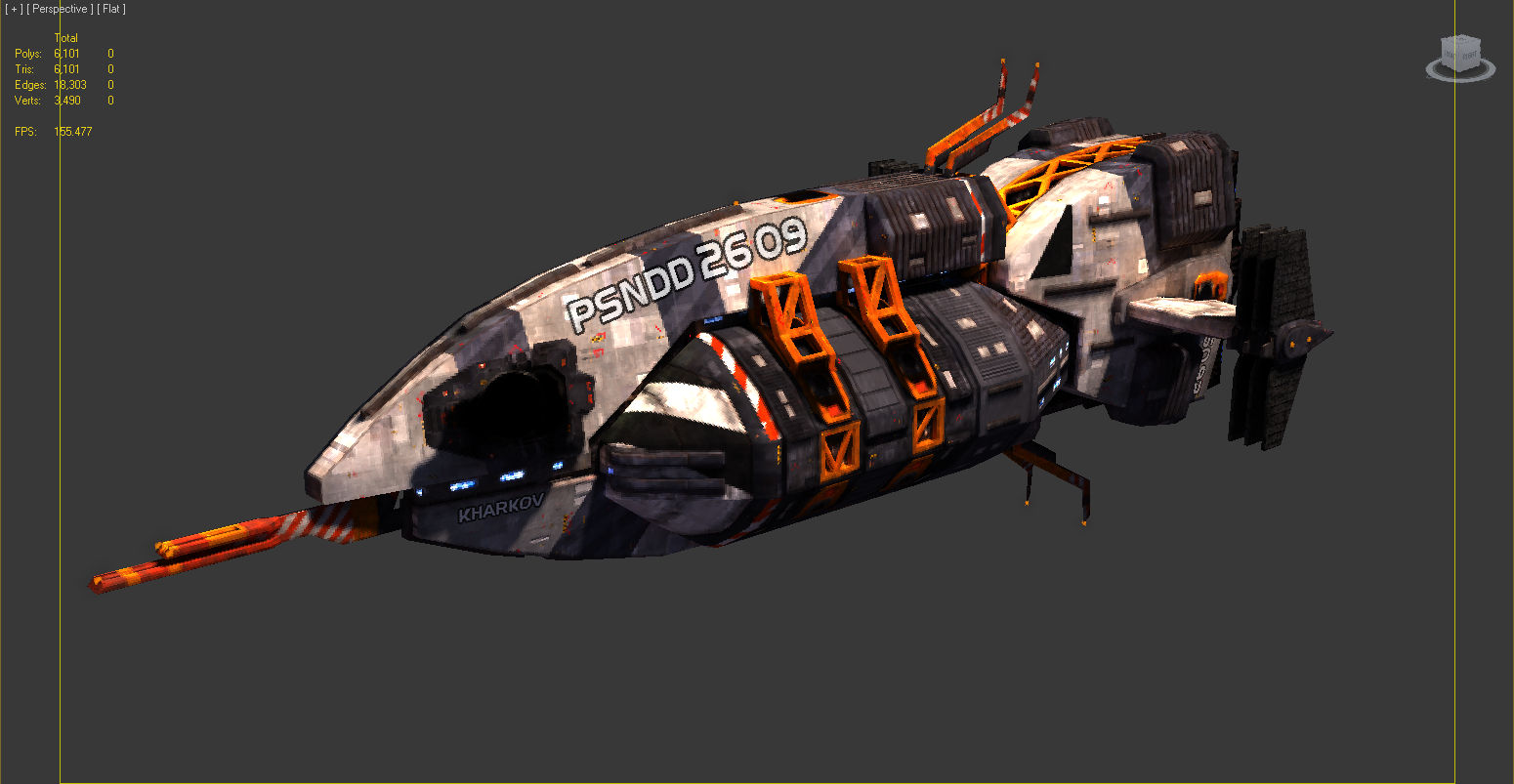 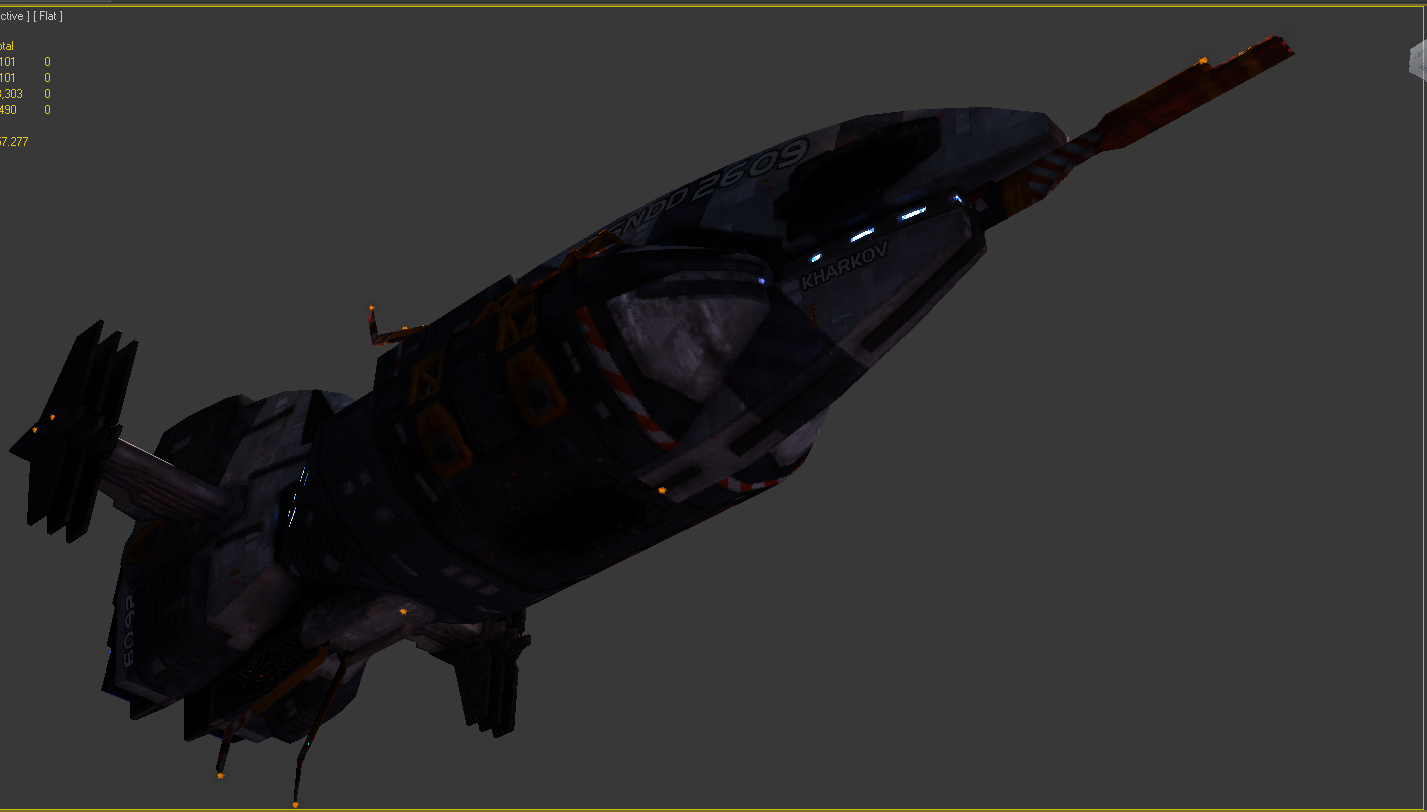 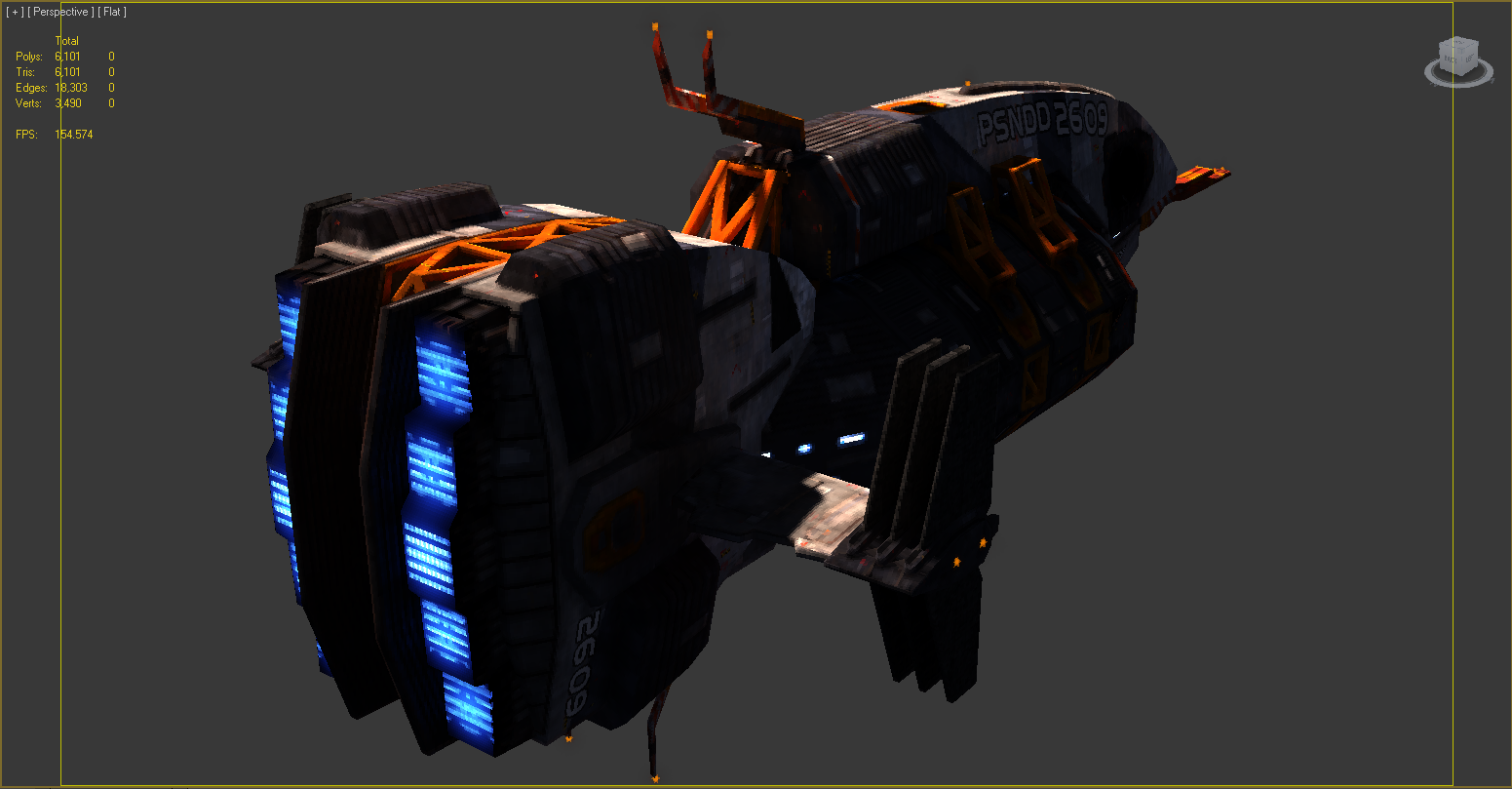 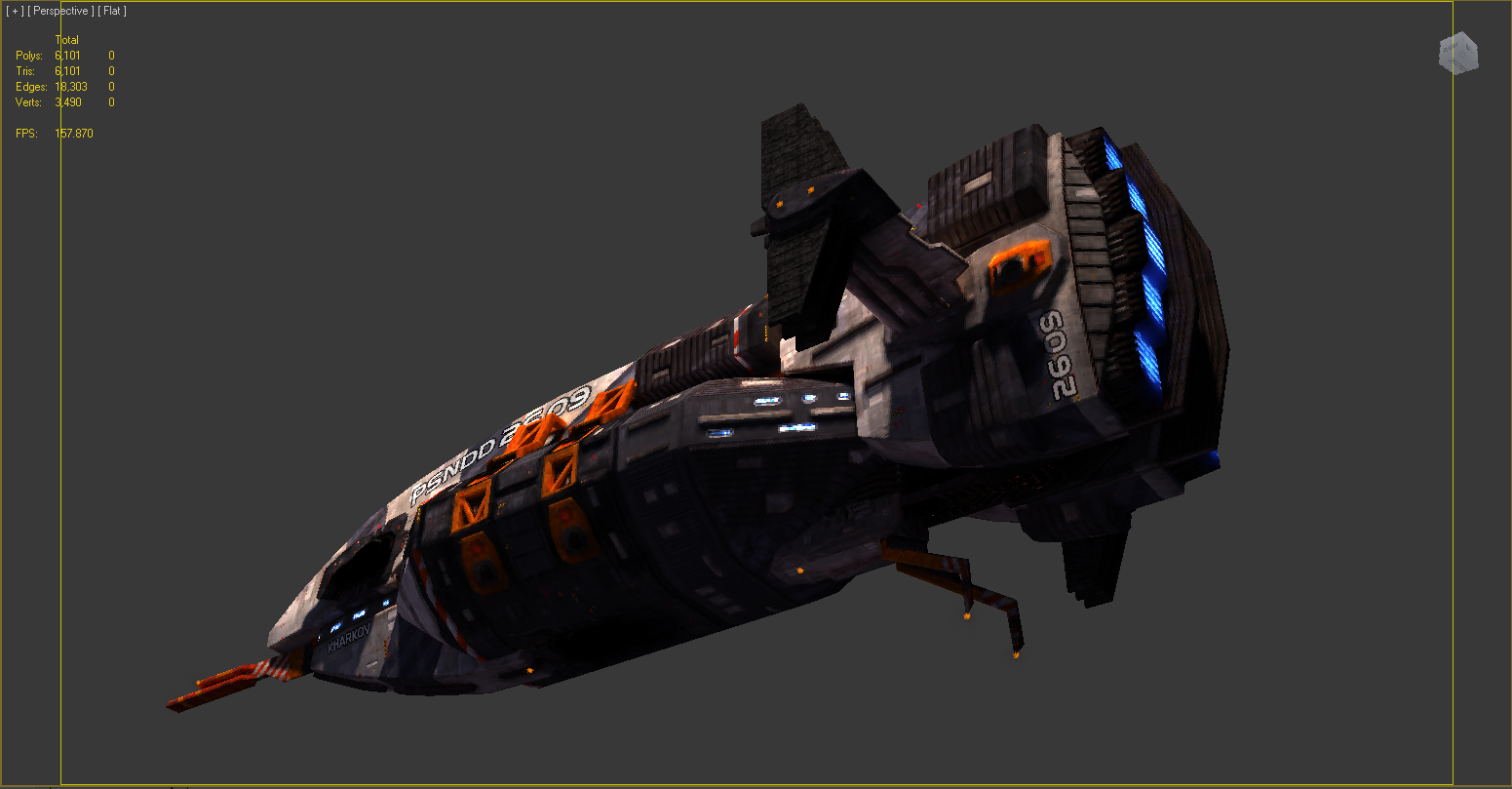 and in the game! 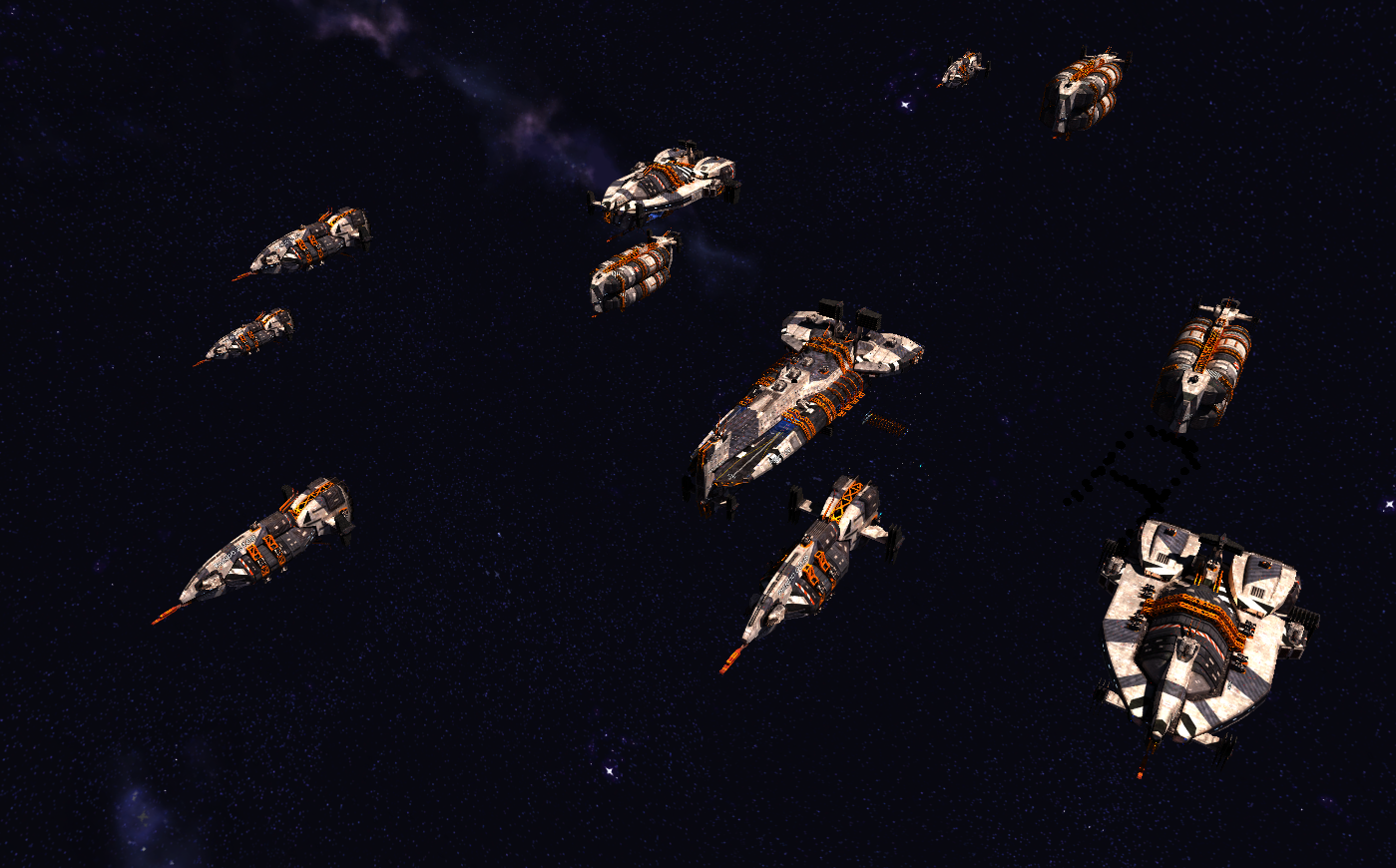 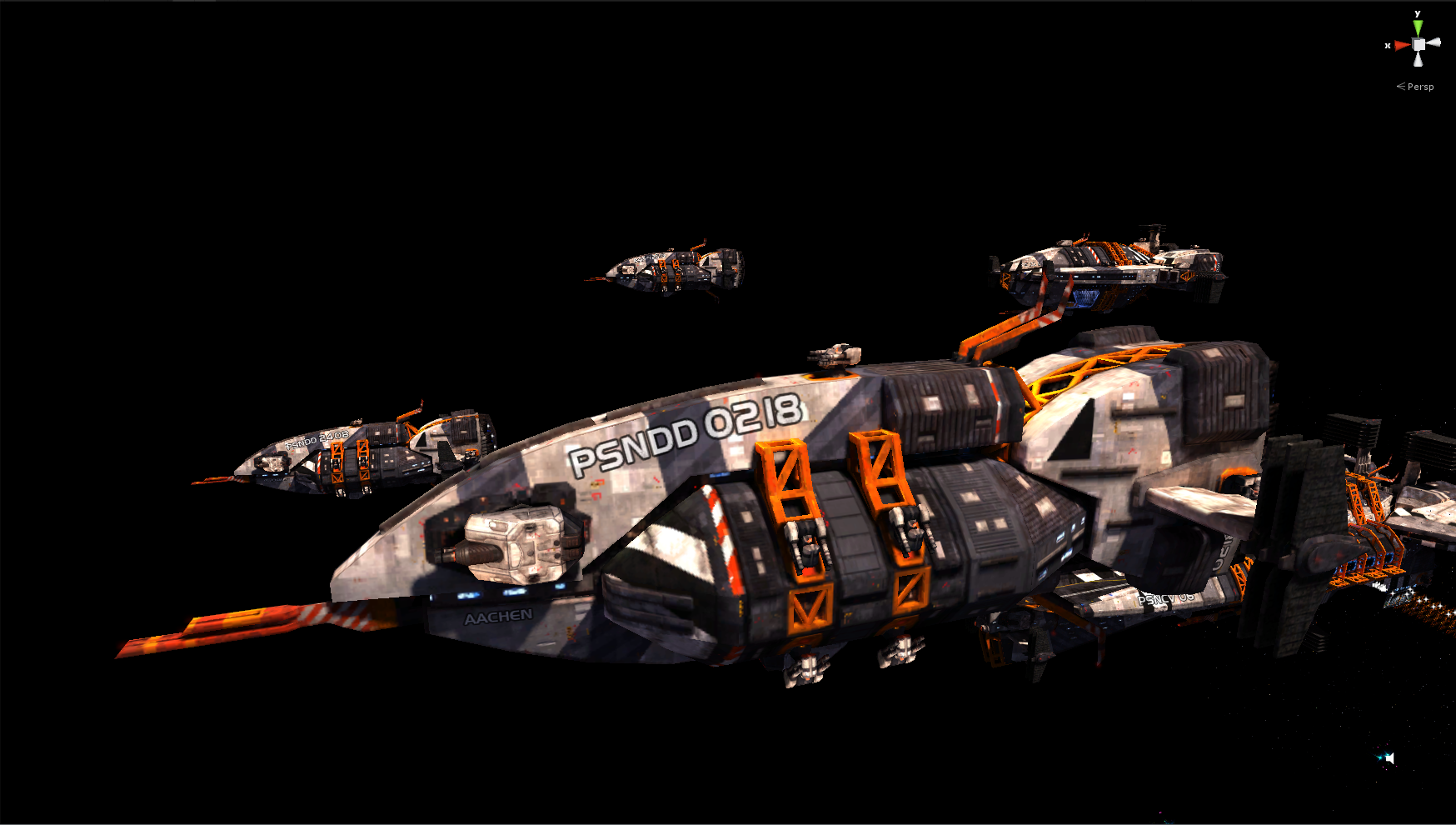 And it's in the build as well.
http://www.hedfiles.net/WOSN_Alpha/WOSN_Alpha.html
Enjoy!

The last ship looks a lot like some Homeworld ship. Its an overall nice design and I don't spot any dead angles so far. Should be tough to fight it.

That destroyer... so awesome. And... radiator fins? Just a little 'hard' scifi detail makes it so much better. I luuuurve it!

Hey Howard. Absolutely incredible job on the game so far! Is Joystick support added or planned for release? This game would be a perfect fit for kickstarter with all the current hype around the rebirth of the space sim as a genre!
H

Lars: Yep. it's mostly anti-fighter, and it will indeed be a tough nut to crack. if another cap ships comes from behind though...there's not much it can do but run for it.
Klavs: Thanks, man! The plan is eventually to have the radiator fins glow under battle conditions. Enjoy *that* tasty slice of awesome.
MasterWandu: Glad you like it! And yes, Gamepad/joystick support will be coming. We're building everything with modular hooks (nothing is tagged as keys in code - just links to inputs, the keys trigger the inputs, it could be anything). As for kickstarter... well this is intended to be a free game, but that's definitely something we're considering.

So, there's been a bunch of updates - Jan and I have been hard at work making functional systems. the radar and targeting are now mostly functional - the targeting still needs to have some work done, and the radar doesn't quite flash as we want, but other than that, the game is looking great! There are a couple of new additions to the gameplay. Hit "space" to spawn a random enemy fighter infront of your fighter. these fighters have a rough AI, that will try, generally, to find you.
you can select the closest ship by hitting "r" the radar moves too quickly through the details of your target, but you can see at least that part working.