We haven't had any posts at all on this forum for a full year now, so I was wondering how things were going.

Bad news - as far as I know WC Pioneer is pretty dead.

The good news - Howard is working on a similiar project where a lot of progress is happening - You can find a trailer of it here:
http://www.wingsofstnazaire.com/

...and more of it in his modelling thread on Scifi-Meshes here:
http://www.scifi-meshes.com/forums/...ings-of-Saint-Nazaire-(Game-Art)-Large-Images!
W

AWSOME! I'll be looking forward to ANY game made by Howard!
Bookmarking now.

Looks nice. I hope that there's a decent story behind all of the combat as well.

I watched it a few times, but did I actually hear the ships are drawn on screen in the WC1/2/privateer way(raycasting)? Why do that and ignore current common 3D acceleration hardware available today(or 15 years ago)?

Ijuin said:
Looks nice. I hope that there's a decent story behind all of the combat as well.
Click to expand...

Mace said:
I watched it a few times, but did I actually hear the ships are drawn on screen in the WC1/2/privateer way(raycasting)? Why do that and ignore current common 3D acceleration hardware available today(or 15 years ago)?
Click to expand...


I think you should check out Howards first post in his SciFi-Meshes thread. He talks about the game, the story and the game-engine. This should answer most of your questions.
Here's the link again:
http://www.scifi-meshes.com/forums/showthread.php?77919-Wings-of-Saint-Nazaire-(Game-Art)-Large-Images

I this it is also a performance proofof concept. You theoretically get Ann amazing looking game that runs just as well on a really wide range of systems an that also looks the same. And there's no reason you can't use modern lighting and shading techniques on sprites.

This should answer most of your questions.
Click to expand...

Not the most important one, collision detection, and the "feeling" of a "3D vs. a 2.5D" game, and the need of implementing extra physics to make it handle "real". Now I would definately play it, but I wonder why he(or more specific the programmer) chose to do it this way, instead of the more modern principle using polygons and textures. Ofcourse the awnser would best come from the guys themselves, and I'm pretty sure he has noticed this thread bynow.
H

Hi, Guys! Yes, Pioneer is essentially dead. I hate to admit it, and I hate to see most of the work I've (and Brad mick, and Joel) come to naught...but I am endevouring to make sure the assets that I have made are used elsewhere, in other contexts and games. You've seen some of that - I've let Klavs81 have my Scimitar model - and he's taken it and re-made some of the details for his new 3d-printed model sets. So that's pretty cool. More assets will show up in other places fairly soon, I'm confident. On that note, if anyone has ideas for things they'd like to use them for, please feel free to email me with your requests or suggestions.

On Wings of Saint Nazaire...There are two reasons for the Sprite-based ship rendering in the game. The first is a desire to emulate the original Wing Commander games. In other words, straight-up nostalgia. The second is that it actually gives many advantages over normal 3d-polygons and textures: You can display as many ships as you'd ever want, You don't need LODs, You can very cheaply show complex lighting, glows, and shadows on every ship, They don't take much more memory than a normal set of textures and model ( the Copperhead 3d model would be 15MB in memory if it was a full 3d model, it's just 2 more at 17mb as a sprite set), The ships will look the same on every systems, and best of all, they feel like the ships from Wing Commander. I should be clear - the choice to do things this way was mine - the progammer agreed, as he also liked the way things looked when done as sprites. As AD noted - we're also doing modern multi-light source lighting on all the sprites. It's super neat to see a ship explode and light up all the floating junk in the scene that you'd just seen floating by the cockpit. It's very cool.
There've been a lot of updates over the last couple of weeks, and hopefully we'll have a new update video here by the weekend!

Are you planning to smooth out the sprite animation any more than you have? Would be interesting to see if there are any fancy blending tricks to remove some of the 'jerkiness' inherent in sprite animations... Of course that is part of the charm I guess... Thinking along the lines of crossover fading and such. Works in my head; probably doesn't in reality. Speaking as someone who refuses to use LOD models (all the extra work for reasons of technical limitations makes me angry!)

Wojo said:
Are you planning to smooth out the sprite animation any more than you have? Would be interesting to see if there are any fancy blending tricks to remove some of the 'jerkiness' inherent in sprite animations... Of course that is part of the charm I guess... Thinking along the lines of crossover fading and such. Works in my head; probably doesn't in reality. Speaking as someone who refuses to use LOD models (all the extra work for reasons of technical limitations makes me angry!)
Click to expand...

From what I've seen (you can watch their progress on YouTube), there's remarkably litte jerkiness. During the CIC birthday, Howie posted a link to the latest video... I watched it without knowing anything about what it was, and I was blown away when I heard that these were sprites. Watching again, you start making out small animation jerks, but overall the animation seemed blissfully smooth - most people wouldn't even realise what they were looking at.

I actually really, really like the look of that game... there's something about sprites that sometimes just looks more 'right' than 3d models, even with today's technology... like how Privateer is one of the more visually engrossing games I've played even if it's all pixelated and awful.

Yeah it's pretty sweet already, I was specifically looking for it, and once I had seen it, that's all I COULD see... I love the spacecraft designs though... Looks very post-NASA with all the exposed yellow gantry sections on the cap ships. And you can definitely see the WC influence.
E

Howard: It looks awesome! I would love to do a news-post on Shotglass. Are there any more information regarding the story line or are there some screenshots, I can use?

Howard Day: The coolest nerd-man I'll probably never meet! Keep up the good work. I wish I had the talent and artistic skill to create stuff like you do!
H

Wow, guys! this is way more excitement than I was expecting...
Wojo: So currently, No - we're not planning on blending the sprites as they rotate and skew around. Originally the wing commanders had 37 sprites per ship - they were mirrored left-to-right, with 8 definite rotation angles in every plane. We have 544 sprites per ship, with 32 definite rotation angles in every plane. That alone makes the sprites feel much smoother. And yeah - I love me some exposed gantries...
and the Hognose bomber is almost literally a blend of the Broadsword and Longbow! 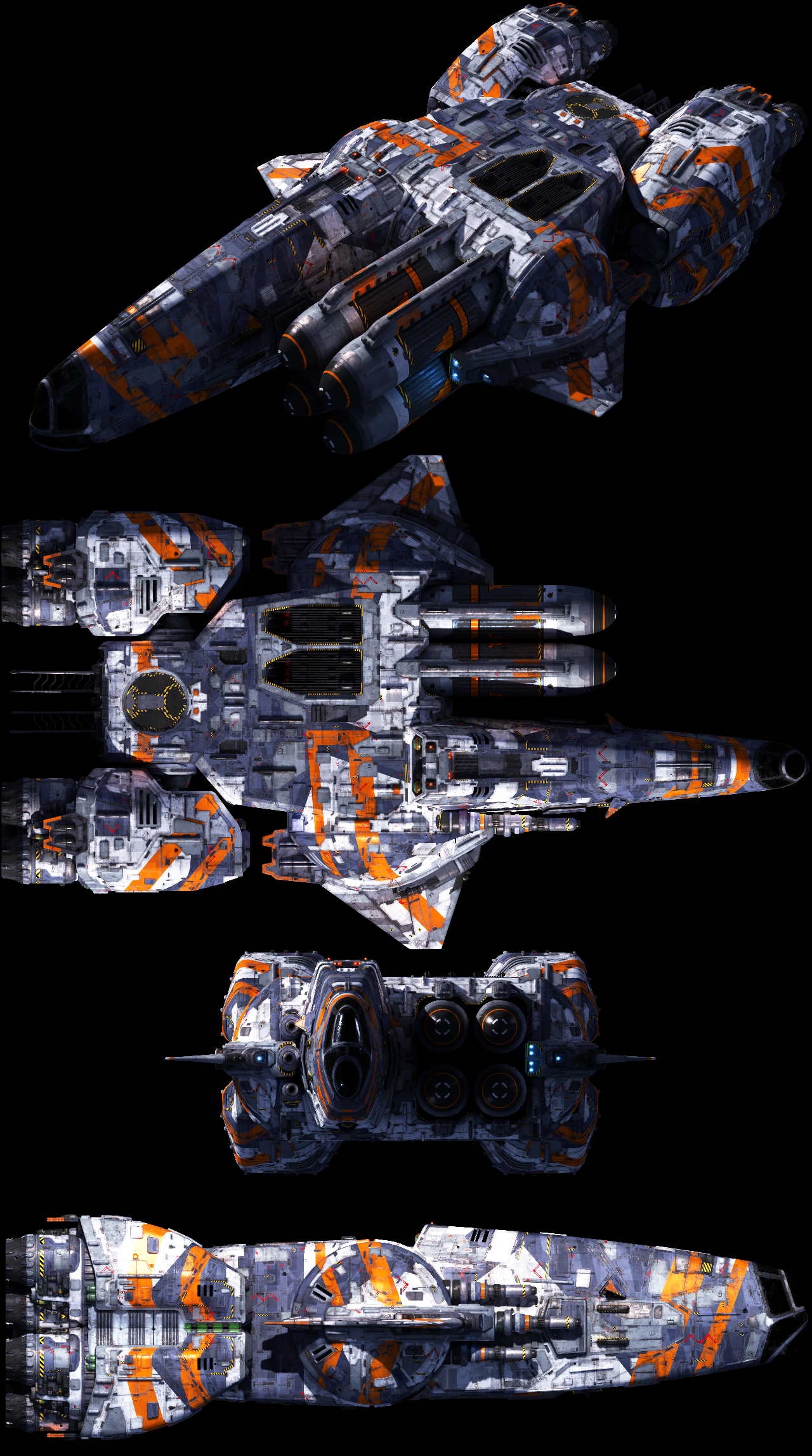 The Copperhead is a mix of the X-Wing, Raptor, and Viper from BSG.
http://cghub.com/images/view/264355/
There's a bunch of awesome references in each...The Cobra is based off of some of Feng Zhu's work for the cancelled Wing commander Privateer 3 project. 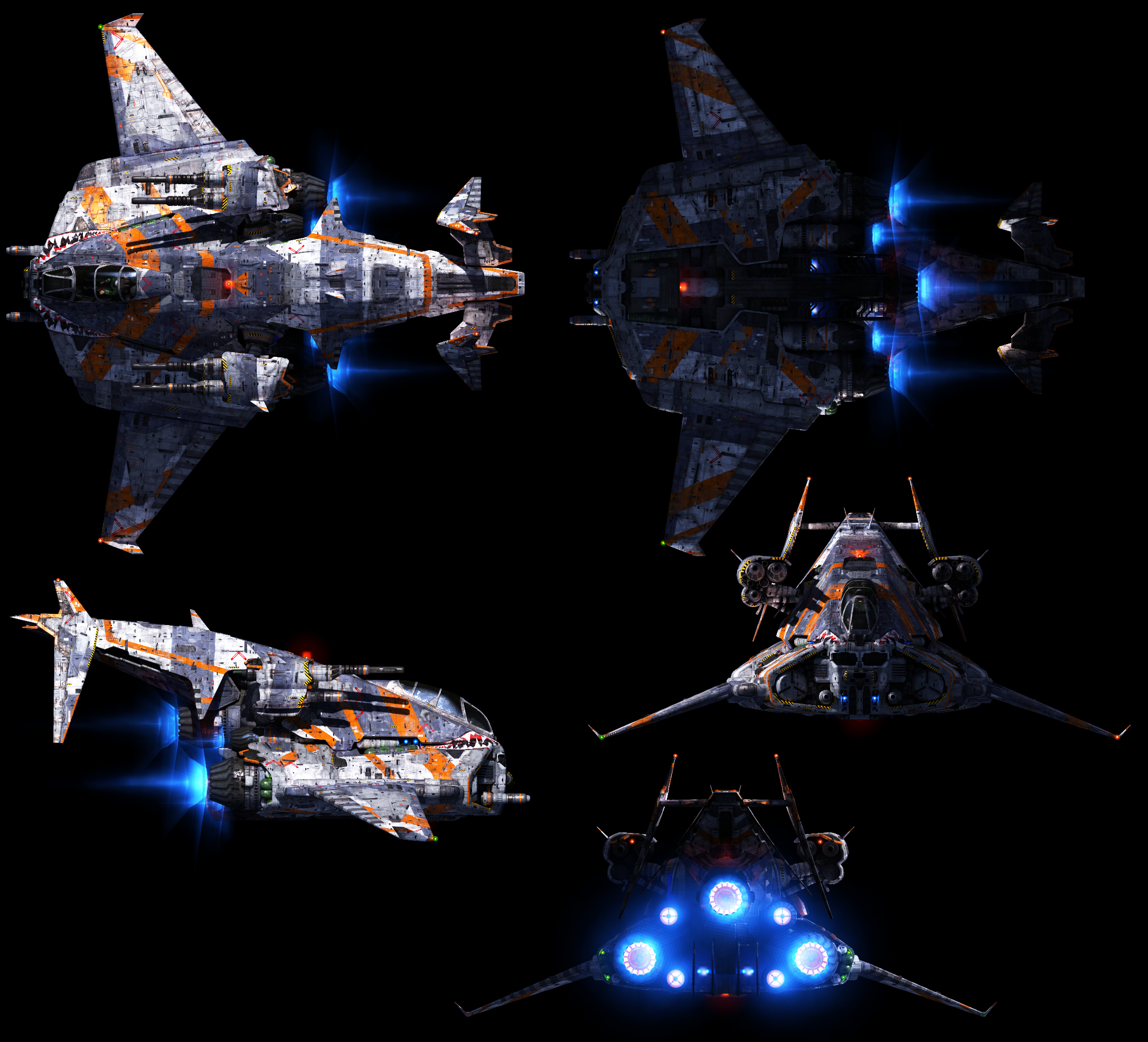 Quarto: Yeah, I think it's good enough when I sometimes forget that I'm looking at sprites! And you almost never get close enough to see any pixelation.

Dyret: Yes! I don't know why, but it just feels...right. I can't explain it, but I can say that when we first got the sprite picker working I was absolutely giddy when I saw it working. Instant Nostalgia and Awesomeness.

Evan: Thanks! And yes, there's stuff. Lots of stuff. You should PM me so we can chat about what you'd want to know/use.

Malcolm Reynolds: If you are indeed the Captain, then we have already met. I have the pictures to prove it.

I like how the Hognose has those four big torpedoes visible and loaded asymmetrically all four-on-one-side instead of two on each side--it shows how these ships are designed on a "form follows function" plan instead of a "beauty at the expense of performance" plan--they look highly utilitarian. Combined with the war-worn look of the damaged paint, it really looks like the users of these ships have been in a long, weary war where the practicality of winning battles has taken priority over spit-and-polish, much like the last parts of the Terran-Kilrathi war (e.g. the Confed WC3 craft). The designs really say to me "this is built for shooting stuff, not for an air show".
P

Is there a chance that WoSN will have a merchant/mercenary gameplay option like i.e. Privateer had (or Pioneer was planned to be) or will it be purely a space sim with campaigns, missions and stuff?

Howard Day said:
Malcolm Reynolds: If you are indeed the Captain, then we have already met. I have the pictures to prove it.

ljuin: Well, good then - I was definitely going for utilitarian, not pretty.

Plasteel: None whatsoever. This is a pure Space combat sim with campaigns and missions and multiplayer support.
Malcolm Reynolds: 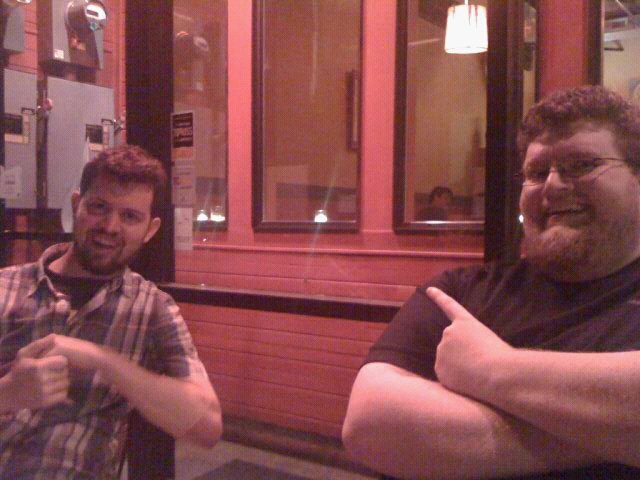 You're the semi blurry one in the back.

Here's a preview of the 4km long battlecarrier...