I was wondering where I could find some pictures of:

If anyone could point me in the right direction or post them here, that would be great...

(P.S. - I've looked at Fleet Tactics but the site has been known for "inaccuracies".)

There's essentially two pictures of the Waterloo-class. The in-game sprite:

And then the 'splash' setting picture the game would display of the ship before a scene set onboard the Gettysburg or the Centurion:

There may be a second pre-rendered shot, of the TCS Agincourt from a different angle.

The CVEs, which don't ever get an actual class name, appear on the cover of End Run: 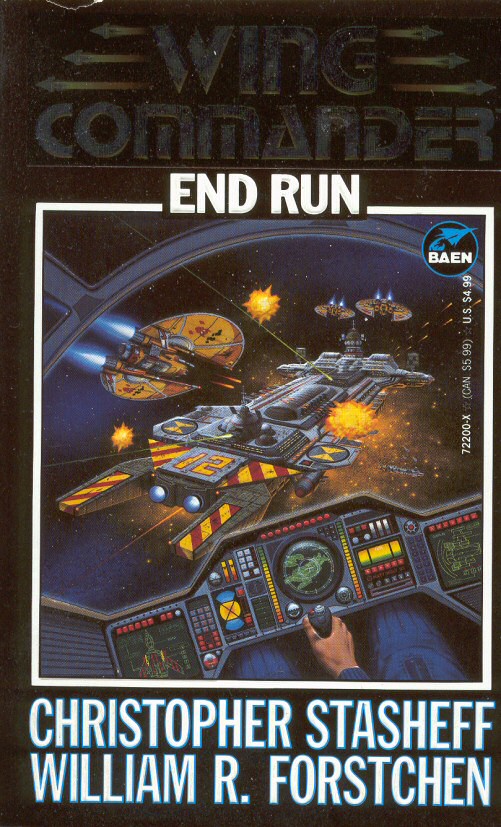 The "Jutland class carrier" doesn't appear anywhere in Wing Commander. There's no TCS Jutland anywhere in the continuity at all. What sites like Fleet Tactics refer to is the TCS Trafalgar, the 'CVA attack carrier' referenced very briefly in End Run. It's just a brief sentence or two that mentions that they exist - so there's no picture.
Last edited by a moderator: May 24, 2018

Officially, how many Lexington-class Carriers were built? How many survived the war?
P

Thanks, LOAF. On a side note, is there any information on the Concordia-class Fleet Carrier "TCS Freedom"?

Paragon said:
Thanks, LOAF. On a side note, is there any information on the Concordia-class Fleet Carrier "TCS Freedom"?
Click to expand...

The only places I've seen that is in Aces fanfic or what have you. I honestly don't recall it in WC lore, in any games or manuals.

The TCS Freedom was a capital ship destroyed by Grikath during the Tesla Campaign (referenced in the Wing Commander Academy manual). The idea that she's a Concordia-class carrier is fan conjecture.
You must log in or register to reply here.
Share:
Twitter Reddit Pinterest Tumblr WhatsApp Email Link
Top