Wing Blender 2.1.1 has been released.

Wing Blender 2.2.0 is out. Now, the importer can search the MAT and PAL directories for textures and palettes, respectively. The MATs no longer need to be in the same folder as the model to be recognized and imported.

Yep, they're for the CNTR/RADI chunks on each LOD of a model.

Kevin Caccamo said:
Yep, they're for the CNTR/RADI chunks on each LOD of a model.
Click to expand...

Nice! Thanks! I suppose I should've read the docs first...

It's been a long time..
Anyway, if you've tried to use the importer, you'll know that it is sluggish as hell. I've been trying to work on that. I made a few optimizations to the importer recently, which mostly involve using flat typed arrays instead of lists of lists, and it turned out to be MUCH faster than what I had.
Here are my test results on models from the MUP:
master: 45.777912414999946 seconds to import SHRIKE.IFF
optimized importer: 4.5732363529998565 seconds to import SHRIKE.IFF

Wing Blender 2.2.1 has been released with the new importer optimizations.
D

Arrays are how opengl handles geometry now. Graphics cards will generally only accept arrays which is why the speed up is so dramatic. Display lists are basically a dead design.

Hey @Kevin Caccamo , How does Wing Blender currently handle "DOCK" chunks? I think it sort of ignores them? Is that support that could be added assuming it doesn't exist? I think it would be useful in our current remodel project as well as any future mods to be able to define docking points on meshes.

After taking a quick look through the game files, it looks like DOCK chunks are a feature of the ship files, not the mesh files. I have no idea what DOCK chunks do or how they work, and Wing Blender was designed to export mesh files.

As for the performance boost, I don't think it has anything to do with OpenGL. After I get the mesh data from the mesh file, I have to construct a mesh for Blender, and it's the construction phase which was taking the most time. The loop on lines 297-305 of import_iff.py became much faster once I started using a dict, with the edges converted to frozensets as keys, and the edges' indices as values. I received another significant speedup once I moved the "bl_mesh.loops.add" line above the second loop that iterates over the face data. ("loops" are corners of a face, consisting of an edge and a vertex)

@Kevin Caccamo I have a question on exporting meshes w/LODs. I can't seem to find any documentation on it so maybe you can assist. I've tried two different methods and neither seem to work. The first is I leave the two meshes unparented and try and export the entire scene. I get the following error: 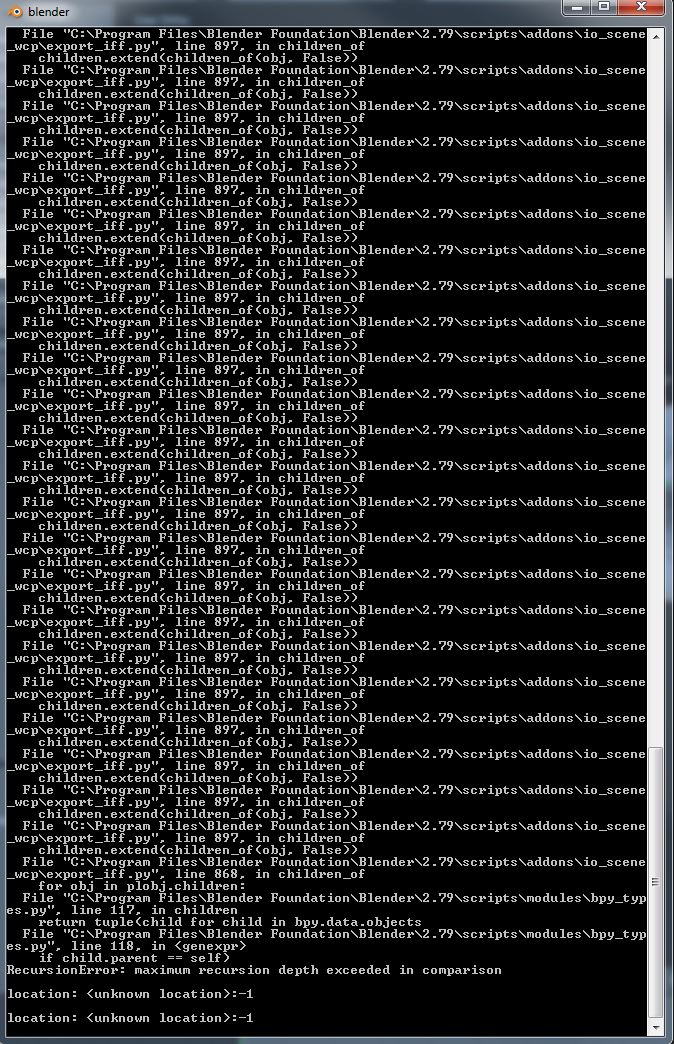 I'm sure it's probably an ID10T error, but I can't find any full documentation on the process so I thought I'd ping you and see if you had any insight.

Try writing 'lod' after the dash using lowercase letters instead of uppercase letters, and having one of the 2 LODs selected.

Kevin Caccamo said:
Try writing 'lod' after the dash using lowercase letters instead of uppercase letters, and having one of the 2 LODs selected.
Click to expand...

Should they be parented or unparented?

All the LOD meshes should be at the same place in the hierarchy, so leave them unparented, unless the mesh is supposed to be a child of another mesh.

Also, I tried writing LOD in capital letters, but I couldn't reproduce the errors you're getting with Blender 2.79b.

I got it figured out - thanks! I rebuilt the file and found two issues, followed the advice above and it works as expected. Thanks for the help!
You must log in or register to reply here.
Share:
Twitter Reddit Pinterest Tumblr WhatsApp Email Link
Top