250 million is wrong, but the Hornet (and the other Wing Commander I ships) do cost "over a hundred million credits" (per the conversation with Halcyon when you eject.)

Actually, WC1 gives us a pricetag for the Hornet. Well, I guess it's more of an estimate, because it's the same for each of the game's four fighters. You hear about it when you visit Halcyon's office after ejecting. I'm not sure if that 250 million figure doesn't come from WC1 - I seem to recall the WC1 pricetag being rather at odds with the rest of the universe.

Edit: LOAF beat me to it with a more precise answer.

I believe Privateer is actually the odd man out in terms of credit value, it just looms so large in our mind because it's an integral part of the gameplay. Wing Commander I's hundred million dollar planes match the novels pretty well: Action Stations has fifty million dollar Wildcats, Fleet Action has a carrier complement that costs ten billion credits (or a hundred million a fighter, on average.)

That's all also fairly reasonable, assuming a credit is roughly equivalent to a modern dollar and that a Rapier is equivalent to a modern jet fighter. Privateer really is the weird one, where you can buy a proton torpedo for 15 credits. If they were some kind of incalculable space money then maybe that would make sense... but we've clearly seen things like meals and drinks purchased for a similar amount.

You guys are looking for canonical information, otherwise I'd interject here.

As far as Privateer - government subsidies. Has to be. Again, not canon...

I think the out-of-universe explanation is just that they had to make it fitting for gameplay reasons obviously. Same goes for the cargo space in the other thread. Privateer gameplay is supposed to be fun and not realistic. We know from Action Stations that a nuke mine is supposed to cost 50000 credits or so, and that one doesn't even have a seeker or engine.

I suppose there are two reasonable explanations:

- Privateer itself is dumbed down for the player and there are really a bunch of zeroes after all the prices; a Centurion costs 200,000,000 credits and a torpedo costs 15,000 credits and so on (and the mission payouts are similarly different.)

- The Privateer prices are accurate but they're part of a system where the Terran Confederation is intentionally subsidizing privateers as part of the war effort.

I would go with the first one actually, that one sounds nice.
EDIT: Except with the meals. That sucks. That must be tons of meals.

Yes, and I suppose the fact that post-war prices are still low (in Star*Soldier) argues against it being some kind of wartime subsidy.

Bandit LOAF said:
Yes, and I suppose the fact that post-war prices are still low (in Star*Soldier) argues against it being some kind of wartime subsidy.
Click to expand...

Well, that one could be explained by market forces...economic depressions are not uncommon after major wars historically (and the Nephilim War sounds like it was particularly harsh on infrastructure), and if there really was that much surplus material (enough that Confed could afford to privately sell massive battlecruisers), well......

the other funny implication might be that after 30 years of unrelenting warfare.. inflation is rampant in the confederation... but frontier currency is nice and strong.

Privateer 2 is also telling; it's a different economy but it has the same issue... and there's no ongoing galactic war that the government would be subsidizing.
Q

Bandit LOAF said:
Privateer 2 is also telling; it's a different economy but it has the same issue... and there's no ongoing galactic war that the government would be subsidizing.
Click to expand...

Well the Tri-System has a big piracy problem and the government pays bounties for shooting down pirate spacecraft. There isn't even a black market for ships because even criminal sources virtually can't beat the official prices (we learn that in the very beginning of the game).

EDIT: Or maybe the ship prices are so competitive because there simply are more sellers than buyers: Wise citizens probably decide to sell their ship after they realize that no matter how good they are behind the stick, after about 20 or so flight hours worth of experience the pirate attacks will get so intense that any pilots survivability goes down, down.

The Tri-System, as you've pointed out to me on a number of occasions, Bandit LOAF, is not part of the Confederation. It is therefore not a given that one Confederation credit equals one Tri-System credit. There could be that high of an exchange rate between the two. You could also have simple inflation at work there - there's close to a century's gap between Arena and P2. I mean, look at the cost of a loaf of bread in 1800, 1900 and 2000...

Err, yeah, I said it was a different economy in my post. But it has the same problem internalized -- a high explosive mine is the about same price as a bottle of beer.

Okay, another update. The WC1 Confed ships are finished from my end. They presently need some stat checking for the Super Wing Commander versions as well as improvements to their history sections. In addition, most of the novel references should be included, but there might be a novel or two missing or some chapter numbers for references on another book.

Excluding the Sabre and the Morningstar, the WC2 ships are practically complete from my end, only needing some stat checking. In addition, I can't get references to these ships from the novels: False Colors, Price of Freedom, or any of the Wing Commander Movie novels. Also I lack the Confederation Handbook, and there might be a few missing references from that book for the Broadsword and Ferret still missing.

Even so, the WC1/2 Confed articles are rapidly approaching completion (excluding history text). In addition, I already have jotted down the mission appearances for all Confed fighters in WC3, WC4, and WCP.

PS To keep apprised of my progress, you can visit my wiki profile where I maintain a full list of Confed ships with detailed notes of lacking areas for fighters I have worked on. I usually update it every night.
Last edited by a moderator: May 24, 2018

Wow! Fantastic! You've been making great progress! Sorry I passed out on you yesterday (spent all morning landscaping and then got home and crashed). I should be home early tonight. I'll start looking at the history texts to rewrite.

Hey WCPedia folks, I was taking a quick break from my work on ships for WCRPG today to begin a few preliminary things with the Nav Data section of the game, starting with information about the Gemini Sector. I came across a notebook I put together a long time ago ('98 think; the main Sector map I've got is from the Aces KOTM campaign) to help me navigate Gemini when I first started playing the game. The notes are very thorough; it contains information such as the names of bases within each system, the facilities available at each base, locations of asteroid fields and unmarked ambush points.

A couple of examples from my notebook:

Capella System:
Rikel System:
Would this be information that could be added to the Gemini Sector system entries at WCPedia? Have I asked y'all about this before? I don't remember.

I'm going to be going through all the map entries you guys do have up in the next couple of days; I'll need to go into the game to get maps for the systems that aren't up for my own purposes. I'll definitely add those to WCPedia when I've got them.

That would be good information to add.

It is all available in the Playtester's Guide to Privateer, though! Here's a sample: 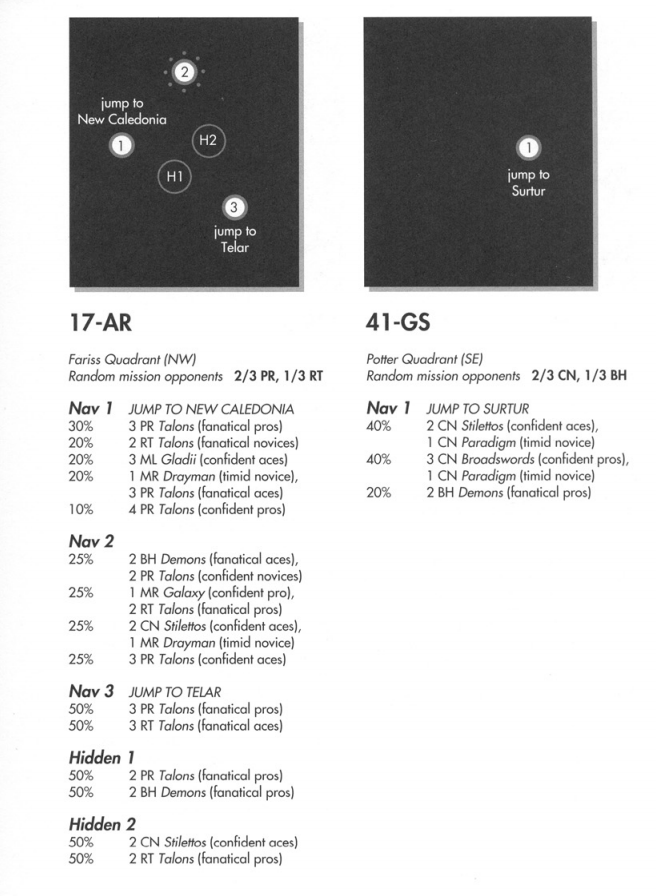 I don't suppose you have the page with the Capella and/or Raxis systems handy...just want to compare.

I've made a number of edits this morning - I added infoboxes for the four Gemini Sector quadrants (with images of the Quadrants straight from Righteous Fire), created an entry for the Gemini star system and added the information I had on hand for the Perry system. I'm particularly interested in some feedback on what I did with the Perry page; how does it look, is there anything that needs to be changed, any guidelines I've accidentally overlooked with my edits, etc.

Also discovered that some of the system maps I thought were missing yesterday were present; I haven't had time to go in and fix the infoboxes just yet but I intend to do so here in a few minutes.
Last edited by a moderator: May 24, 2018
You must log in or register to reply here.
Share:
Twitter Reddit Pinterest Tumblr WhatsApp Email Link
Top