For mobile controls (not that it impacts me as an IOS man so no portable WC for me, maybe you could do a Vita port?) my preference would be keep the game in 4:3 and then use the black bars for additional controls. Then use the area of the screen with gameplay footage as a mouse.
It'd mean using a stylus so that you don't block the action but it'd feel the most like WC mouse controls (virtual thumbsticks make me cry). Of course support for external pads is far better.

External images are served up through an image proxy. Those animated GIFs were larger than the maximum allowed file size, so Xenforo just showed a broken image icon instead of something useful like a direct link. I've increased the limit, but at ten megabytes each they may be rough on some (mobile) users.
H

Okay, on that note - optimized GIFs for this! Here's some late progress - better cockpit art, some better color grading on the explosions. Also showing off the Disable/ram hit from the first person. It's a bit much right now, and happens too often 9feels a bit like bumpercars!) so I'll have to figure out a way to make it harder to accidentally do. 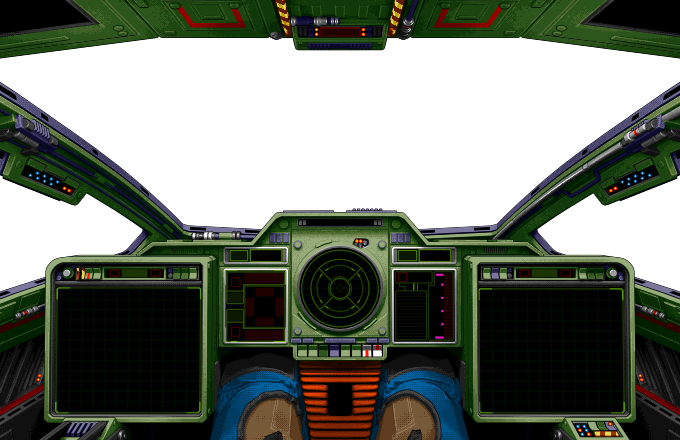 That shield crackle is amazing!

Damn that looks so good allready. I would play it. Have you consideret 21:9 support?
H

ChrisReid: Thanks, man! It's a biiit much, so I've toned it down. I can't wait to do something similar for destroying your cockpit screens.
gevatter Lars: Thanks! I really haven't. Though since I'm releasing it to everyone there's no reason others couldn't add their own art to support that. I just...kinda wanna limit how much art I have to do? It's already massive.

Running demo update! Uploaded the latest, much improved AI, more fun to watch, lots of graphical improvements, and hands/legs/ joystick/throttle in the cockpit! The joysticks's not...quite right for AI yet. Enjoy!

Holy Hell this is crazy. PLEAAAAAASEE do WC2 after WC1. It's my favourite story. WC2/Privateer IMHO are the two best games in the series. Heck this makes it feel like all the remake project stuff I've worked on was just time wasted. Really cool work man.
H

The goal is to release the framework for making a classic WC game to the community - and then let everyone do what they like with it. I'm not looking to remake the entirety of WC1 - thats' way too much work for one guy. but I can put together the basic systems to build a whole game on top of. What I'd like to see is that 10-year stretch of time where Blair's benched on a backwater. Sorta a WC 1.75. Whole new carrier, whole new crew, mix of old an new ships...could be righteously cool.
F

This is how "Super Wing Commander" should've looked like in my opinion.

Okay, I figured out the joystick movements for the AI - it's a lot harder than just doing it for a player - for the player, I just have to offset the animation based directly on player input. Easy! The AI, though, is doing all kinda of complex Quaternion Slerping behind the scenes to turn where they need to go, with only occasionally directly affecting the controls of the ship their code is essentially "riding". Other times they're moving the ships around based on those ships limitations. The end result is that I have to accurately track like... 3 different rotational and positional methods at once, to make it look like the pilots moving the joystick right.

http://www.hedfiles.net/WCR_GL/index.html
So that's live! the shield and lock indicators are hooked up - Locked flashes on incoming fire, will be steady + tone when you've got a missile on you.I really like watching the shield display work too - very much feels like the WC1 one!
Enjoy.

How accessible will your framework be Howard? I have never gone into programming or taken a look at unity. Will there be some grapic interface to work with? Will you provide some form of manual or templates to work with?
H

Well, this is what it looks like right now:

You can see to the left there - it's got the ship root, with all the settings, the graphical billboard that has the sprites, two engine flares, and two guns. The scripts auto-find and hook up all that stuff - you can add as many guns of whatever type whereever on the ship and it will fire them and manage them. same with drive flares - they'll change intensity based on the throttle and burn brighter in afterburning, etc.
As yo ucan see, this doesn't really need you to use sprite-based ships at all - that could be just a model. The ship settings are the same for players or ais. It's just a set of inputs and values that everyone can read from. You put a cockpit model as a child to that ship, the shield displays will "see" the ships values. I'm trying to make this as easy to mess with as possible.
Here's some of the code I've written for this:

I've commented the logic of the code, it's pretty easy to follow. the latest versions of Unity + VS are just wonderful to code with. everythings tracked and referenced - it's a lot more fun than it used to be.

Anyhow, - I expect it to be fairly easy to add new ships, new cockpits - it's designed to be as agnostic as possible with regard to *What* is being added, as long as it's named properly.
I hope this helps?

This is damn cool

Some interface to use..that definitly helps. Looking it lines of codes mades me dizzy ^_^

Very nice job indeed, smells a fork on the unity project of http://www.wingsofstnazaire.com/. Did I smell that correctly?

Awesome!
Crazy!
I love it.
I am an old man and cant wait for it.

By the way, is it maybe possilble to use it with a joystick?

Good luck and thanks for your work.
H

DefianceIndustries: Thanks! Glad you like it, I'm having a blast putting it together.
gevatterLars: Unless you want to fundamentally change how AIs behave, or add ship behaviors that I've not accounted for, like...I dunno, cloaking? then you won't have to even think about code.

Maslas: NAh, the only thing that's the same is the sprite picker code for the angled shader. Everything else is freshly written by me - the reason being that I've gotten a lot better at coding and knowing what's possible since I started WOSN in 2010, aaaaand Unity is MASIVELY better than it used to be. Nested prefabs, for instance, are just fantastic.
Kumanokami: Hello! Stoked you like it.

When this thing is playable by humans it will support every form of input from arrow keys to HOTAS. The game engine is completely agnostic as to the inputs driving these ships. I can literally switch from AI to human control on the fly - game don't care.

Okay - medium update - I've added some animation to the player's legs - it always bugged me that they we static with everything else going on. now they're controlling yaw - I miiight change that to spin? Maybe. I've fixed the eject light and core damage warning lights - Eject will light up with 30% core damage - but only if your shields are < 50%. I've updated the explosions to inherit the ship's velocity when they die, also updated the projectile impacts to spawn debris when you start chewing through armor. The plan is to have specific Kilrathi/Terran armor and hull chips - but for now it's just spawning a bunch of rings like Sonic getting shot in the ass. Fuel's been coded and hooked up - a Hornet has the same fuel capacity as a F-14. 2400gals. Seemed a good starting point. In the background, but not quite live- I've been working on camera switching for right/left/back/ chase cam views - they look awesome - but I need to mess with the art-shifing logic a bit to make the m move around right when you turn.
Enjoy!

one small thing that's been bugging me, and I'm not sure if it's temporary or intended, so brace for unsolicited feedback