Status
Not open for further replies.

I suppose we've all heard in one way or another, I've been glued to my favorite channel Fox News for three hours straight now and expecting a press conference in twelve minutes. If this is really true it will be the best Christmas present Mr Bush could possibly give to the American people and things are all of a sudden looking good for hius reelection.

Actually - no I hadn't heard til now. Interesting news

Yes, I see it right on the TV! I´m so glad that Saddam Hussein is now inprisoned by US-Troops! I hope the work in Iraq will be more peaceful now.

One of the biggest assholes of the world is in captivity, let´s hope Osama Bin Laden will be so soon, too.

At least we, the western countries, will win the "holy war", started by muslimic terrorists. We should hit them hard and heavy.

My congratulations, USA and GB.

(Not all german people think that the pacifistic way of Germany and France is correct, you know!? )

Saddam Hussein has set a new standard for crazy beards - one that it may take those of us who are too lazy to shave decades to overcome.
J

Yeah I have to say that Saddam looks kinda like the uni-bomber with that crazy beard. I really wonder if he was leading the insurgency from his pitiful dirt hole. A dirtbag in a dirt hole fitting isn't it?
G 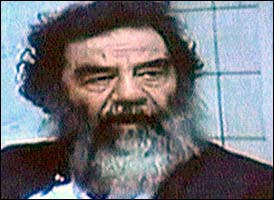 (The beard, from the NYTimes.com frontpage. Will likely disappear over time, I guess.)

I'm sure President Bush is having an early Christmas

Now the next thing we can expect from the hippie protestors is "Saddam was mentally ill and not responsible for his actions! Free Saddam! Free Saddam!"
S

Well I don't know about that. I think that if you look at the footage provided we will all have some questions.

If he has been in a hole for the past months then how has his skin gotten darker? The footage was grainy at best. While the "medical examiner" was examining Saddam his hands with the instruments were blocking Saddam's mouth. So, how is he suppose to see in then? Also, he only checked the skin on the sides of Saddam's scalp, not the top or back and what he did check he did so superficially.

And the big one. How do they know it's actually him?!? The world at large has been unable to tell who's who when it comes to Saddam and his doubles. Well some might say it's the DNA evidence. But with the above true how do we know the the US got the right DNA to compare with? And with the DNA from his sons (if indeed they were his sons) all that can really be said is that he is related somehow to them. Not necessarily the father.

As, for the fox news comment made above. That channel is the worst "news" channel that I have ever had the misfortune to lay eyes on. Let me explain. They quite flatly twist reality for the betterment of the US or themselves. They are quite frankly a propaganda machine. Not convinced? Let me give you an example.

We all know about the controversial dossier. But, what wasn't told to the American people (by large at least) is that there was *two* dossiers. When the UK finished there investigation they found no foul play involved in the first dossier but found what was involved with the second dossier was found to be "appalling", etc. I saw this in a report on BBC World so I think that the Brits know what's going on in there own country.

Now what was shown on Fox "News" was very terse. They reported that the British had finished there investigation into the dossier and no foul play was involved. That's it! I can't really say that this is a good reflection of reality knowing what really went on, Sorry.


I have just seen *alot* of window dressing on this one. So, Saddam caught... I won't hold my breath.

Very good news! It's incredible, really! Congrats to US and coalition forces who got the wolrd rid of a totalitarian dictator!

And the only post that guy had was about this thread, that's weird.
L

GeeBot said:
(The beard, from the frontpage. Will likely disappear over time, I guess.)
Click to expand...

Maybe it's jsut me and my humble english knowledge, but that sounds more like the beard id going to retract back into the head instead of getting shaven off.

I have just seen *alot* of window dressing on this one. So, Saddam caught... I won't hold my breath.
Click to expand...

Though I'm sure you already know, I should post a reminder: you're stupid.
S

The fact that no one (as of yet) has posted any retort beyond "you're stupid" just gives me an indication of the level that I am dealing with here. Perhaps someone else will actually contribute to a discussion instead of childish name calling.

Why don't you guys just look at the photo of Saddam before and after the shave. The nose seems different doesn't it and the skin colour as well, eh?

I'll also give you guys something new to chew on. On an CBC news show today they went out onto the streets and asked people what they thought of Saddam being caught (if in fact it is him and not one of his doubles). I'll paraphrase here.

reporter: Saddam has been caught. What are your thoughts on that?
person: I don't think that it's a big deal.
reporter: Why not?
person: The situation in IRAQ doesn't depend on 1 individual.

This guy does have a point doesn't he.
C

Theres a chance they didnt get him, but I figure that "oops, we screwed up here" would be enough of a debacle to the Bush administration that they would have tried to keep a lid on it until they were 100% certain. Therefore: HOORAH!

I still think that the Iraq thing has slime all over it, that a good portion of the U.S. administration is scum (arent they all though?), and that our Fearless Leader has a couple of major issues still to work out. That doesnt take down how happy this makes me.

You're just a troll, though - we don't have to take you seriously. If you were... Quarto or somebody, and you wanted to debate this - sure, we'd take you seriously. But you're some idiot who showed up here (post count has a purpose!) looking for a fight. We're completely free to call you stupid and post pictures photoshopped pictures of George Washington until it gets boring. Then we'll ban you.

I'm shocked that someone's skin colour would be pale after living in a small dark hole for a period of time!

I love this place

And, an added bonus, I think we've found a second Joshua to have fun with. Next thing you know, he'll start spouting something about our captive actually being a dummy made of super-polymers.

I don't think he'll be as funny as Joshua - he's just your average jerk-job conspiracy weirdo using this news to pick a fight (how he picked the CIC forums, I have no clue).

The government faked the moon! The super-car is powered by pot! There is pie in my hair!

Status
Not open for further replies.